It all started with a couple of red wines and Nici Beech gushing about some circus or other on Twitter, so I kind of took the piss, but she urged me to check it out, as did Gwion Llwyd. So, thinking back to Johnny R’s excellent review of The Commonwealth Games Women’s Netball Play Offs between Canada and Barbados, I thought what the hell, let’s review it.
I was given a couple of VIP tickets and told to be there an hour before take off. Brilliant I thought, and I whipped the Manic Girl off her feet and told her we were running away to the circus.
We drove to Caernarfon, and saw the Circus signs and she said, ‘I’m not watching anything with animals in it, and that is a Circus with animals in it.’
This didn’t make sense… We flagged down a passing copper, he replied, ‘Sorry Guvnor I don’t speak Welsh..’ He couldn’t help us, although Sarah did ogle his fine truncheon.
Why did I think it was in Caernarfon? It was on Beach Road in Bangor, I’ve passed it enough times this week!
‘You’re late! You’ve missed the speeches.’ Cursed a man on the gate dressed in a leather kilt, I was the only clown at this circus… Caernarfon…? What possessed me? Pleasant enough drive though…!

Once inside the tent you soon realise this is no ordinary circus; no smell of maltreated animals, no Papa Lazaroo clowns, no seats. Purpose made scaffolding draped in white netting towers in the centre of this arena. The kilted man and his helpers, forever courteous suggest the crowd ‘walk around’ to view this spectacle from different vantage points. Children are given preferential treatment to ensure they get a good look amongst the standing crowd.
The performers are warming up within the netted area (which will soon drop), you see the odd shadow, a ballerina pirouetting and shrieking like some crazed horror film extra, people are jumping and yelping across the scaffold like chimps on some 12 Monkeys induced trance on the set of One Flew Over The Cuckoos Nest. Others are scaling ladders to the peak on this Big Top. There’s a live band on stage in the crowd, not just a live band, but a narration for the whole evening, who alone are an entertaining entity in their own right – improvising songs, incidental music, incredible musicians. 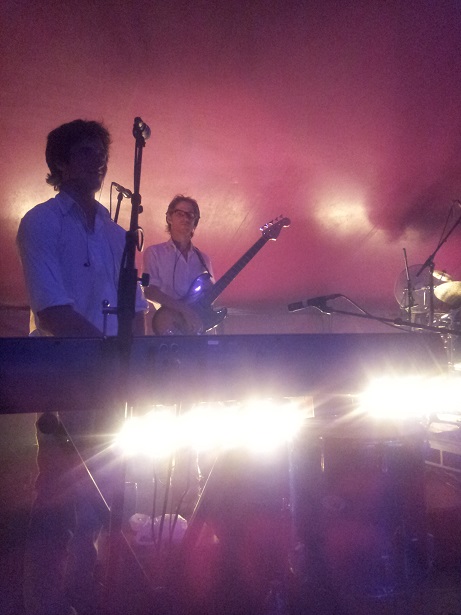 If you told me I’d be raving about a bunch of trapeze artists, then I’d probably be ranting at you… but raving is exactly what I’m doing and if I had a seat I would’ve been at the edge of it throughout a lot of these ‘acts’. Put it this way: at work, if you accidentally get a splinter in your thumb, the result is endless form filling, phone calls and reports – for a splinter! They call it Health and Safety (it really means, the company covering it’s arse against any possible claims against them – they couldn’t give a flying toss about your welfare really – you are just a number, an easily replaced cog in a corporate pig of a machine that feeds off your toil and sweat).
I’d love to see my Health & Safety Officer here at this circus. There’d have to be nets, helmets, safety ropes, St John’s Ambulances, Hi-viz jackets, Toetector Boots, knee pads, gloves, more fire exits, a library of Risk Assessments, and they’d still probably stop it happening. They’d have a field day… 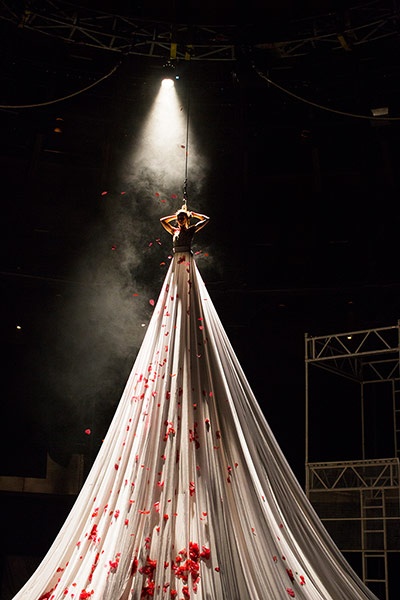 Back in the real world though, or at least, this reality created tonight for us by No Fit State, we are treated to real danger – young men and women high up on ropes, performing jaw dropping feats that leave the fluid audience in awe. You simply don’t know where to look at times; the guys scaling up and down the ladders as pulley weights for the girls on the swings or the ropes, the hula-hooping, the trampoline swimwear section(!), the fire eating – it’s all here, like a Crystal Maze on crystal meth – incredible.
You have to see it…