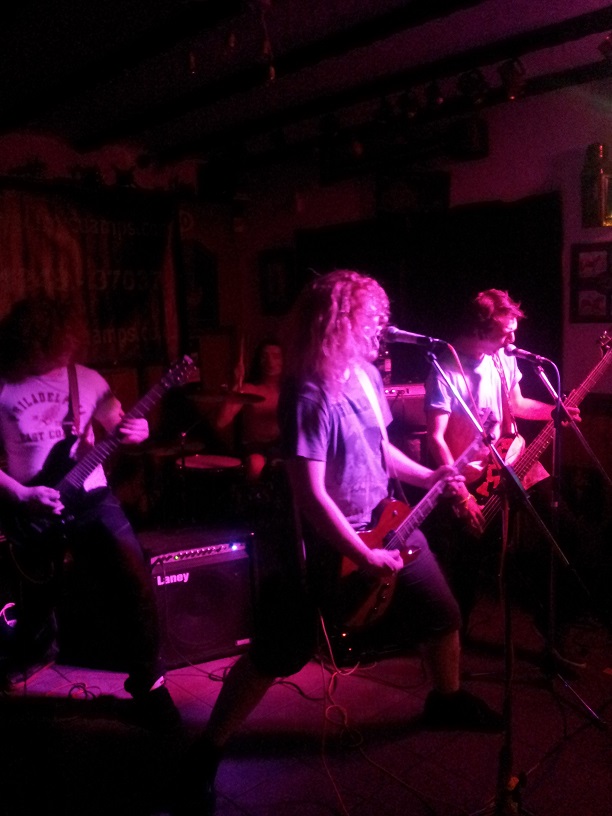 I saw Rhyl’s Psycodeth at the Railway Institute a couple of weeks ago and they literally stopped us in our tracks (excuse the pun!). Now, I was never one for Slayer and Metallica when they first started doing the rounds, only saw Metallica for the first time, when Tim dragged me to the MEN about three years ago, and after the second time (and a 3 hour set), I vowed never to see them again. And I only listened to Slayer for the first time a month ago when Cumi coaxed me into ‘giving them a try.’
Psycodeth struck something within me, beside the fact that they are criminally young (unless you worked in showbiz), they are the only band in North Wales playing this genre (as far as I know), and they are quite simply fucking excellent at what they do. 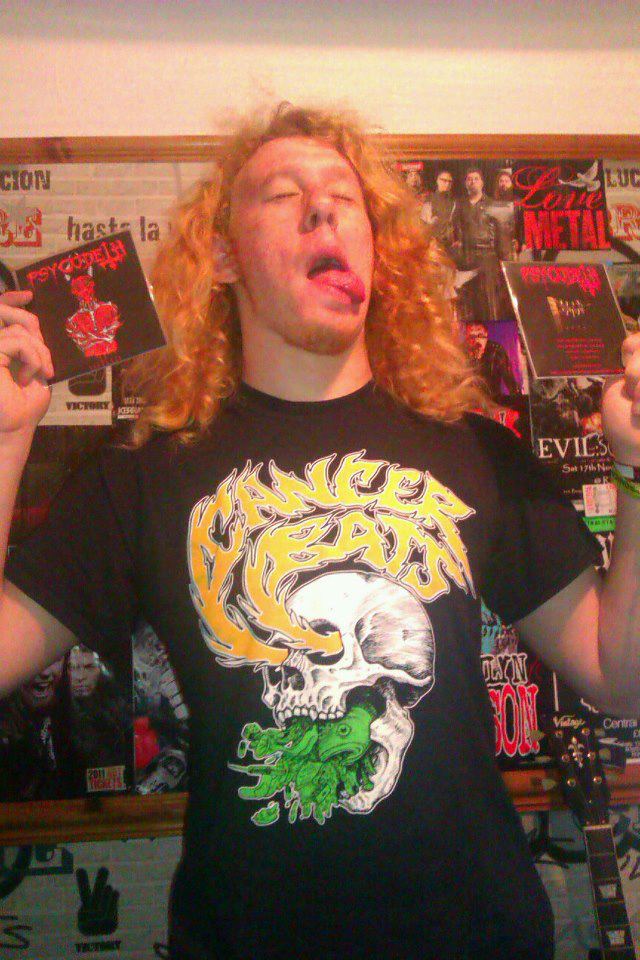 1. First up, a bit of Psycodeth background? When did you form? What inspired you?
Well Psycodeth sorta came around early 2012 from me and Joe (drummer) hanging out, listening to similar bands that didn’t interest the other people around us like Metallica, Rage Against the Machine and Slayer throughout high school. We played in a few bands together which never really took off and we really developed an understanding of the way we each play, so it was a no brainer sticking together and finding the right musicians to fit in with us.  We saw Koonan play guitar a couple of times and were totally blown away with the stuff he could do so he really inspired us to get our shit together and get him into the fold. We were recommended Dean by an old friend so he came to a couple of practices and we really got on and since then we’ve all been pretty damn tight. We just wanted to make fast heavy loud music like nothing else, it’s all we wanted. We watched Metallica and Slayer DVD’s and would talk endlessly about how doing what they do is the only thing we could really see ourselves doing well in the future, we really were not guys born to be zombies behind desks and I think that is what makes us so damn determined to have fun in everything we do.

2. First gig you played? Best gig you played? Worst gig you played? And why…
The first gig we ever played was in Cooneys Bar in Rhyl a couple of months after forming. We had a different singer at the time and played a set of covers which really makes me cringe now, but it was actually a great fucking gig! All our friends came to watch and we had a few other people in the audience and it was just a great way to kick off the band. At this time we had a huge rivalry with another band of people we knew and tolerated (as you do in high school) called Taken By Time and the rivalry was ridiculously vicious with the typical inner band bitching so it was quite a hostile night, but still a very fun first gig! Our best gig would have to be a couple of months back, we played Connah’s Quay Labour Club, totally invading on an indie night so we stuck out like a bunch of sore fuck thumbs but we totally killed it and went down an absolute storm. It was one of those gigs where you get off stage and think ‘what the fuck just happened’ because the adrenaline was that high. Our worst gig? That’s a tough one to answer really… we try our very hardest to have a good time no matter what the crowd or sound are like but we played in Vegas Bar in Rhyl supporting Gridlocked and three of my strings snapped on the second song with no back-ups, plus the crowd was non-existent and we were really not all there so we just said ‘fuck this’ and stopped. Wish we hadn’t but ahh well… 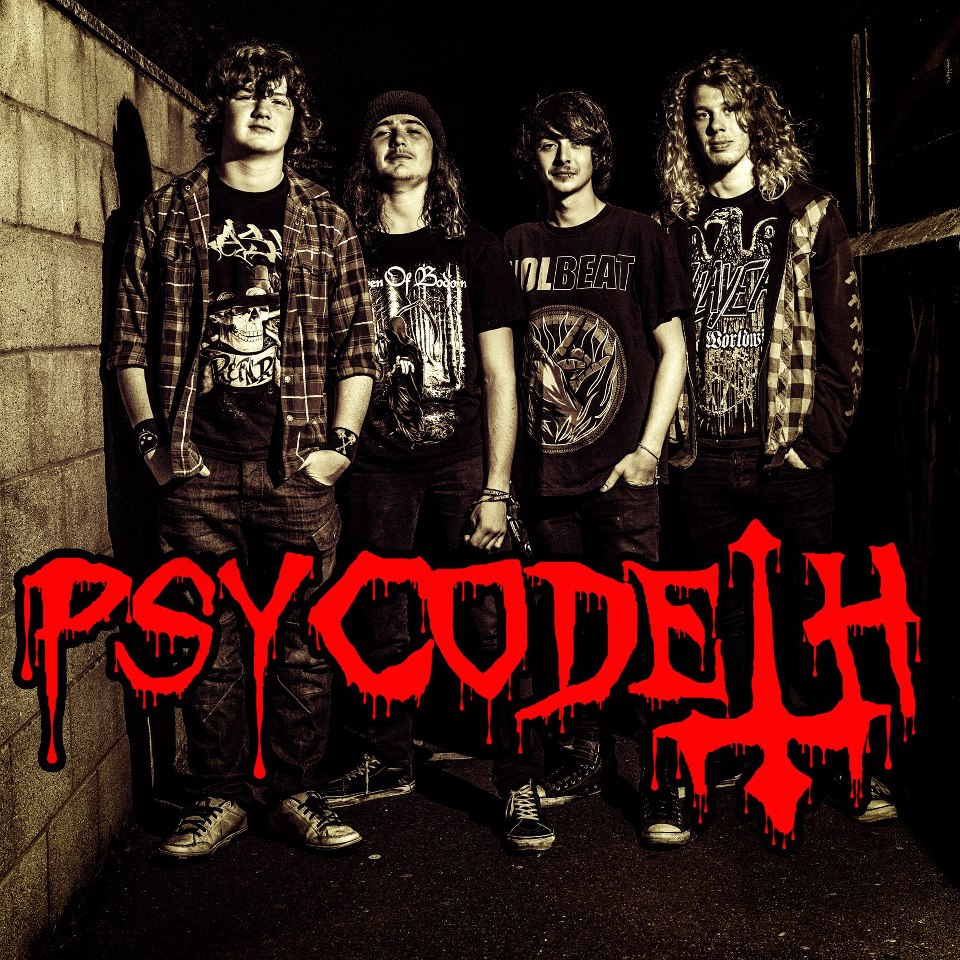 3. The scene in Rhyl was pretty amazing 5 or 6 years ago, but now seems to have died a death… Are there any other bands in Rhyl other than yourselves?
The scene in Rhyl is disgusting. It is such a shame that people round these parts seem to have just stopped giving half a fuck about local music, especially after it was something that really inspired us to wanna get our shit in gear. I still remember sneaking into Vegas three years ago with Joe to watch Kickstart Kitty and Charizard Shiny and thinking ‘fuck, this is incredible, where do I sign on?’. Luckily people are starting to give a shit again with Dirty Vultures bringing in some amazing gigs in the Rhyl and Prestatyn area but still not enough people are at gigs and if they are they are dead and silent. I honestly can’t think of one off the top of my head but I can tell you right now there is not a single band from the Rhyl area that plays the kinda shit we play so we are always the odd one out on any bill and to tell you the truth, I kinda dig that.

4. Any releases yet? Any planned? What is the Psycodeth manifesto?
We have a couple of demos floating around of Lifeless and Dry Blood but nothing really official yet. We are pretty desperate to get something recorded professionally as soon as possible and are hopefully going into the studio sooner than later! Right now though, we are pretty much focusing on expanding our horizons and creating a reputation for ourselves through gigging as hard and much as we can, and we fucking love it. Playing these shows and watching the bands that we play with is what we look forward to every second of the day, if we weren’t in this band I genuinely do not know what I’d fill my time with.

5. What do you sing about? Do you have any political / social views?
I tend to write in a stream of consciousness method, I write what comes to my head and then adapt it as it goes on. I tend to focus more on the sounds of words and how they shape the melody of the vocals because it makes it just ten times more interesting than sitting in front of a notepad and writing down rhyme after rhyme. I tend to enjoy writing about concepts personally, I know Dean writes best about more human things but I love to write about the fictional, mainly because reality sucks and Psycodeth is my escape from it. Concepts are much more fun and easy to lose yourself in while writing, like Reborn is about someone thinking they are dead, but they are actually in the womb again awaiting rebirth, Dry Blood is about the oxymoron mentality of a criminal, in this case a rapist, not realising they are in the wrong.
With British politics, I find myself being sickened more and more by the day. I mean, when did it become more important how you appear on Television and how often you smile than how you run the country?! It is all just a lesser of evil situation with what we call our so called ‘democracy’ and I really try and separate myself from it. I believe that the media is a form of social control run by the self-appointed ruling class in order to keep us all dumb and powerless, injecting us with sensationalised info-tainment which detracts from their obvious corruption and greed. All a bit communist-esque really, never noticed that before!

6. First record you bought?
Embarrassingly, my first record was The Black Parade by My Chemical Romance. Not something I’m proud of really but still my all-time biggest guilty pleasure! I was raised with the Black Album and The Real Thing by Faith No More on the stereo 24/7 so really I class them as my first albums. I love my parents for my musical education!

7. Any embarrassing moments being in a band?
People spelling our name wrong.  I hate it. We got rid of the ‘H’ in psycho because with it in it says ‘PsyCHODEth’ and quite frankly we didn’t fancy a small fat cock in our band name! Pretty much every other poster or promoter has spelt it wrong, we always laugh it off but man it’s annoying!

8. Plans for the future?
The future is pretty non-existent for us right now. We are in this for a good fucking time and right now we just wanna gig and gig and gig again until we can afford to professionally get some of our shit out there. There definitely is a future in this though, we all love it too much to ever let it go away. It is our creation that we have moulded for nothing and we are damn proud of what we do. We get that the metal scene has sorta disappeared in North Wales, but it’s all we know and all we love.

9. And finally, why is your bassist so angry?
Ha ha, Dean is a mystery! Nobody will ever understand the enigma that is Dean, I envy his talent a lot, I cannot scream to save my shit but he does it flawlessly every gig and with a shit ton of feeling and intensity and I really admire him for that.