This is probably the last North x North Wales in this capacity at least, as Kyle and Meg leave these beautiful Menai shores to venture capitol themselves in the sunlit gardens of Liverpool. So maybe a North x North Wales in Scouse City is a prospective all dayer in the not too distant future? In fact it should be compulsory, pulling the cream of North Wales across the Mersey (by ferry of course) to show the red and the blue how we do it…

With Crudlets and young cousins to boot, an ‘all-dayer’ wasn’t an option so I had to pick my band, tie the kids up, duct tape across their mouths so the neighbours don’t hear their screams and nip out to see Orient Machine.

NxNW is always a sedate affair; almost a folk festival, the lighter side of indie, it’s Techno without the No, it’s punk with a silent P – the fully clothed tantric orgy was in full swing when I turned up… Lot’s a familar faces from the early Bar Blu days in Rhyl, albeit some of them filled out now since being a skinny indie kid in your late twenties is no longer cool.
That psychedelic war torn refugee from the planet Gorky, John Lawrence (pic above) was smashing his guitar to pieces over Jaci Williams‘ head as he wrapped up his set… ok… it’d be an interesting spectacle, but it ain’t gonna happen. Actually the most raucous thing about John’s set was some screaming pisshead stumbling in from outside, gatecrashing the party and spoiling the great vibe.

Earlier on Ralph Latham & The Rumantics had smashed everyone’s back doors in, Junebug hoovered up after them, Hannah Meg strutted her stuff and Matty Ginsberg ponced free drinks in a professional manner of course. And after I had left, Heldinky played their wonderful toned down psychedelica, Cowbois Celtaidd played tonight yesterday tomorrow with their time machine folk-rock and Secretaire in Mic’s words were, ‘Pure mentalist with a sheer touch of brilliance.’

Orient Machine grabbed me by the throat a couple of months ago and squeezed me until I was blue in the face and after that assault I was in a real need for more erotic auto-asphyxiation. Driven by that beauty of a beast of a Bryce Amp that he couldn’t quite get to grips with, main man Dave Morait oozes confidence without being arrogant, ‘Yeah I’m a fucking great all round musician, but I ain’t gonna boast about it.’
It’s easier to write about bands in modern times cos I can simply link you to their music and let that do the talking, yes, it’s lazy, but the the trick is to actually get you to click that link, to feel the need to broaden your narrow horizon, to add to your musical armoury and Orient Machine will do just that. They are musical crack-cocaine, you’re hooked, Morait is both a genius and a cunt; why can’t I make a noise like that? 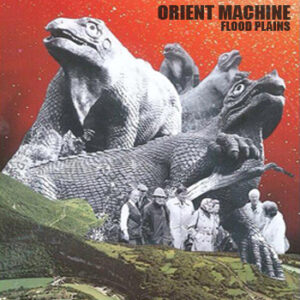 But let’s not just focus on this focal point, Orient Machine have a chilled out finger picking bassist who plays with ease and without a care in the world, and a drummer who’s really a technical tub thumper (new drumskins please, he’s broke these already).
They jam some weird shit, full of delays and demons then suddenly Morait sings ‘Tired of all of your words, don’t try and let me down,’ and they smash into the instantly recognisable and superior Flood Plains. This is ace; they’re wired, and despite the headache Morait has, he still makes demands of his guitar, ‘Bleed you bitch!’ as he thrashes the living daylights out of it. The songs are complicated without being all Biffy-prog, the right hooks are in the right places making them accessible to all and sundry. The Orient Machine is about to leave, hop aboard you’re in for one hell of a ride…
Oh yeah.. click that fucking link…