As I touched upon in my Red Zephyr album review; the day began with a krischna curry at Tim Griff’s and ended in the company of our old friend Jack Daniels.
Inbetween (and during) all this consumption, we had the pleasure of loud, live music. Loud enough to keep the locals awake (heh heh).

The need to ferry Tim, Lloydy and Christina from Tregarth to civilisation in Bangor put paid to the early start and we only caught the final three songs by Rhyl’s Psycodeth (pic above), but what a breathtaking three songs!
I first heard some early demos last year, which were a bit ropey, suffering from that ‘new song euphoria’ where a band record something and have to get it out there without thinking of the consequences. We’ve all done it and it can be damaging if you stuff is not up to scratch, so DON’T DO IT KIDS!!
Thankfully, Psycodeth, dusted down the duvet and have emerged as a seriously fucking good thrash-metal band. Nice chunky riffs, Dry Blood was loud as fuck, check it out on Bandcamp – yeah, lyrically they cover the usual horror bollocks and we need more protest metal bands – bands who say ‘Fuck you Tory bastards’ as well as ‘Let’s hear you make some noise!’ rather than ‘I’ll hold you tighter just to see you bleed,’ but who am I to judge!!?
They also played Lifeless, and it was a case of stopping us in our tracks and simply marvelling at the wall of sound before us. Great guitar harmonies and an 8 string lead guitar (fucking show off!! ha ha!!) 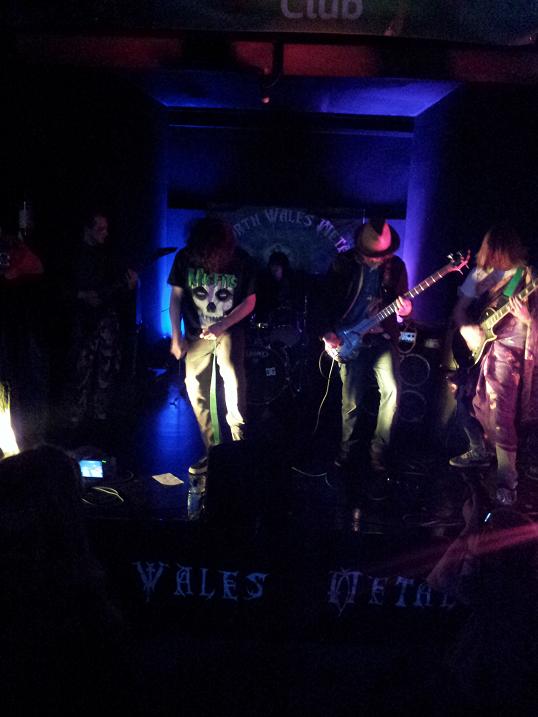 Dolgellau’s finest and probably only export Decidian kicked off with their latest single (I didn’t catch it’s name).. it opens all nice like some Dire Straits at an award ceremony, but you know they’re only toying with us when vocalist Garin Hughes rips his throat and we’re in it hell for fucking leather.
It’s controlled aggression, channelled anger, extremely well thought out, conceptual, constructive and destructive. The band’s ramshackled appearance betrays the number of influences on display here, Misfits t-shirt, cammo pants and button-up shirt, federo hat, I couldn’t see the drummer as he was down in the depths of that long dark stage.
Great front man, as great front men should be… animated, not shy and gutsy.
I’ve also just read that 3 of this 5 piece have quit since the gig… So it may be a case of Decidian being a band for the music archaeologists… Shame…