It was supposed to be a quick fly by in the hope of catching the mighty Inferno purely for entertainment’s sake. No reviews, no need to be ‘on duty’ – just a quiet afternoon with the family in the intermittent sun with a bit of that bluesy-metal that they’ve threatened me with. I had caught just a tease of their new material a couple of months ago, and have been juddering my time to snort some more… First opportunity was scuppered by a curfew and their set was cut short. This time it was a curfew of my own; not fair for the Cruds to hang around longer than the six hours they already had and beyond their bedtimes, so we sadly had to leave Inferno to the horizontal rain and head back west. 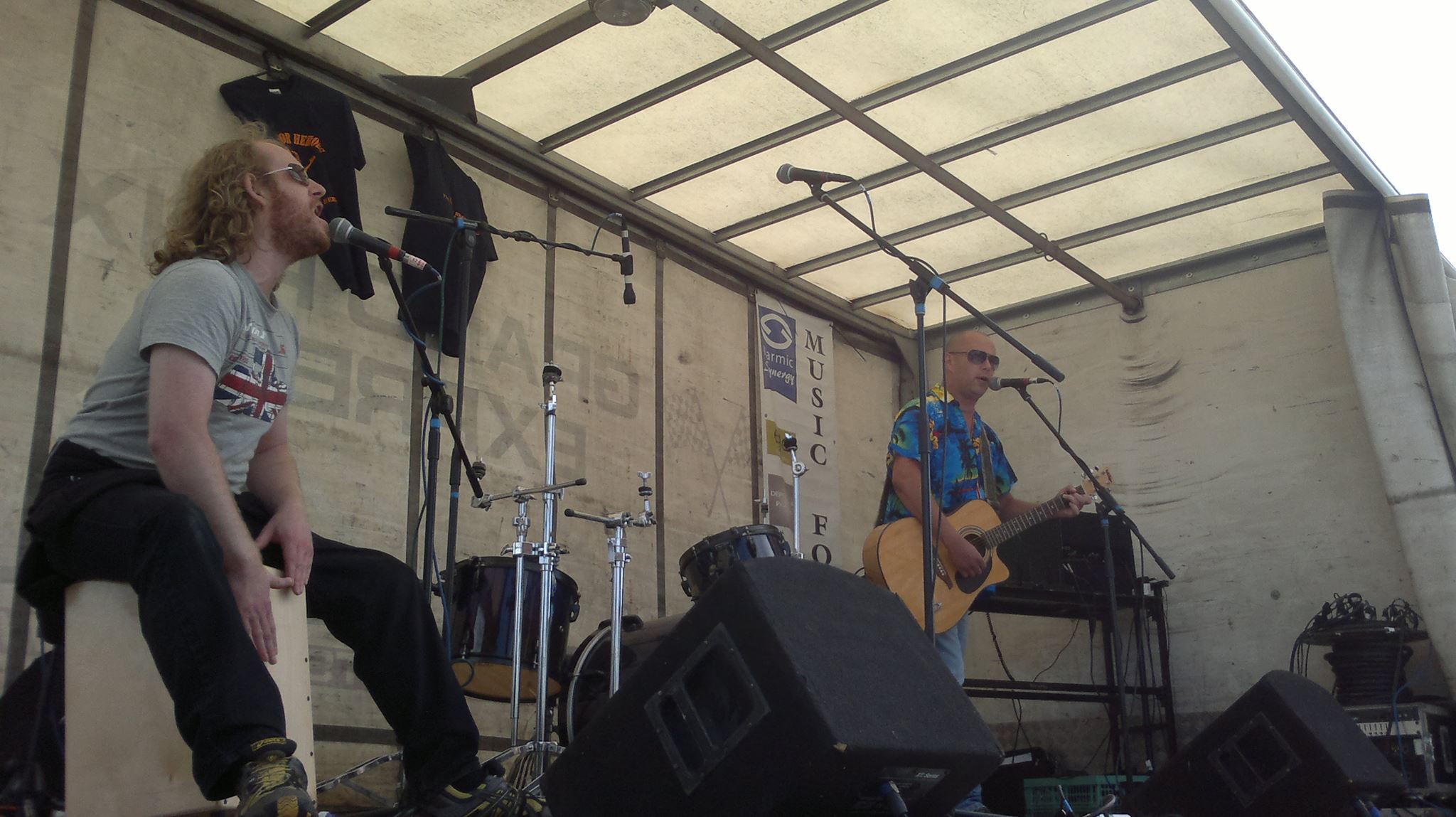 Things were in full swing and on stage I finally got to see Daniel Williamson, a Rhos-on-Sea resident who is a prolific spammer on my link2wales facebook page – and that’s exactly what it’s there for – for you to advertise your goods, providing those goods are relevant to link2wales.
Daniel was in a very offensive shirt, flanked by the inoffensive Ian Cunniff (ex Something Personal)  on the ever-becoming popular drumbox thing that they sit on and bongo ’til the cows come home. It’s folky, gutsy and not bad at all, and a lot better than that Dunky stuff he was doing a few years ago, and yeah, I wouldn’t walk on by if I saw that he was playing in the local pub. (check him out)

If I was a betting man, I’d put my money on Bluebottle Veins (main pic) being too big to be strumming their stuff on the back of a truck in the Links Hotel car park in Llandudno. I’d like to stick a tenner on them playing across the road at Venue Cymru supporting some ‘name’ act on tour – they are that good.
Already lauded by John Robb (Louder Than War webzine), it’s warming to see ‘one of our own’ having their name bandied about higher circles, and now, having finally seen this Flintshire band for myself, it’s plain to see where all the enthusiasm is coming from…
It’s fresh, they’re criminally young, extremely talented, they have a brilliant on stage connection with each other (tight as fuck) and write and deliver their songs with craft, guile and a maturity way beyond their years.
OK, it’s easy to cite where the influence comes from – Black Keys, White Stripes and T.Rex. And, OK it’s easy to turn around and say you’ve heard it all before; and yes I have, but not done this well. And when so many bands of this age churn out that pointless emo punk-by-numbers bollocks, it’s great to see and hear Bluebottle Veins doing something different; I bet their Dads’ record collections are amazing!!
There is a bit of early Black Sabbath rooted in there as well, and the vocalists taking it in turns to sing a couple of songs works really well. The very young looking one has a distinctive Marc Bolan-esq voice, but a whole set with just him singing would grate on you, so top marks for seeing that (whether intentionally or not!!).
Great stuff, not grate stuff ha ha! (hear them now)

For a band that don’t really fall into my remit,  Courteous Thief played and I knew almost every song! And what’s more, I enjoyed every song too.
Now I could be accused of nepotism; drummer Al (as Cumi Pants likes to be known on daytime Radio Wales) lives in my pocket and keyboardist Steve Sync has swapped enough spit with me that we now have the same DNA… There again, I do review my own band’s gigs, so reviewing a couple of mates on stage is allowed..!
Courteous Thief up to last month also boasted ex-4Q psycho-guitarist Gumpsh, which, when added to Cumi and Steve makes this band all the more bizarre as their musical output is folk rock rather than punk rock.
Gumpsh has since fled the nest and, as was the case with Alien Matter, Cumi and Steve yet again, probably for at least the seventh time in their partnership, have had to train up a new guitarist! He, whoever he was did a good job, he was there to compliment Gary’s fine songs and Carl’s bass-lines, and it was a first outing that went well, despite the lashing rain.
Keep your eyes wide open for a new album this year. (facebook)