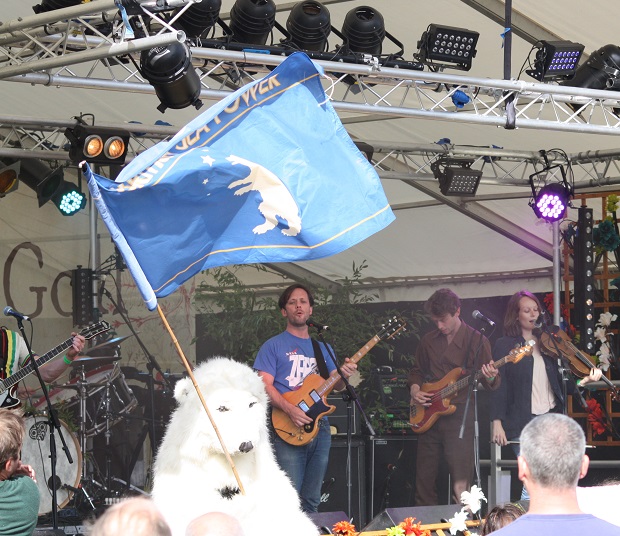 Day Two – Sunday (Dydd Sul). It was a noon start, and evident from this early on that today’s crowd was going to be bigger than yesterday.
One of those tireless workers behind the scenes, Ffion, was good enough to explain the origins of this neat little festival,
‘Gwyl Gardd Goll was first held in the Summer of 2007 after the founder, Dilwyn Llwyd, was inspired to explore the possibilities of staging a small music event in the slate amphitheatre in the historic Glynllifon gardens near Caernarfon after visiting them one glorious sunny afternoon,’ she continues, ‘That initial afternoon festival was a success and Gwyl Gardd Goll developed over the first few years into a two day music event with its main intention being to give people of all ages an opportunity to enjoy contemporary music together in beautiful, unique locations.’ 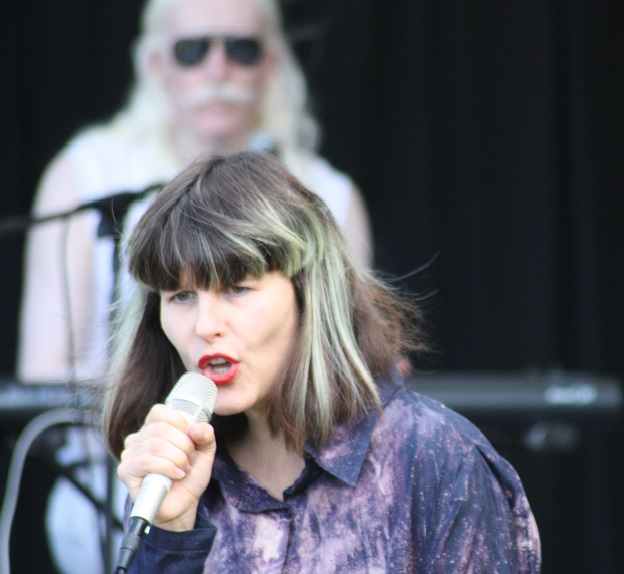 Ex-Robots in Disguise and now adopted local girl Sue Denim kicked off Stage 2 with her slightly bonkers set. I did wonder if she’d add an element of her Mighty Boosh days and sprinkle some Gwyl Gardd Goth into the festival. Songs like Alfie about her dog, and Hollow about rain and lurve were very far removed from the twisted pop of her band, and yet were the same too, that doesn’t make sense… This was a family affair, new baby Auberon enjoying his first festival in only his first month, while mum and dad are on stage. Sue is backed by the uber cool and equally certified bonkers David Wrench, pianist extraordinaire, and the pair of them together make the world a better place.
An out of tune guitar halts new song In The Garden, while Books involves audience participation, with Sue venturing out to coax people to yell their favourite book. Kama Sutra, Mein Kampf, Smot and My Life by Peter Andre were oddly enough not called out.
She overran her slot, ‘I didn’t get to play my hit!’ she laughed. Hopefully catch her again soon… 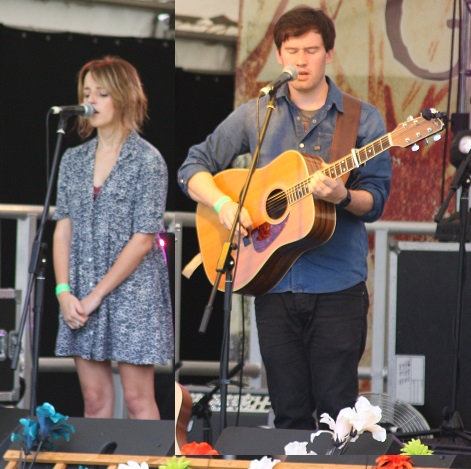 Just before Sue’s set was Gildas on Stage 1, and no, they’re not what a cockney would call the old Dutch currency (boom boom!). He / they were opening the day and was on a cycling tour for Cancer Research, where he is biking and playing. It was a chilled start to another hot day, acoustic guitar, soft songs off his forthcoming album Sgwennu Stori and a sneezing girl for vocal accompaniment.
I asked Ffion about the choice of bands? Whether it was a Welsh manifesto, but using international artistes to pull in the numbers, ‘Dilwyn has always had a passion for the arts. An art teacher by profession, lead singer of Welsh band Yucatan and a devoted father and husband; Gwyl Gardd Goll brings together his passions, a family day out listening to quality music in a beautiful setting.
‘Alongside this, the manifesto of the festival is mainly to provide a stage for local and Welsh-language acts alongside international musicians. Dilwyn aims to programme quality music that he enjoys himself. His heart lies within the Welsh language scene, but he enjoys all sorts of international music and loves discovering new bands that he can then showcase at the festival, such as this year’s The Polar Dream and Death and Vanilla. The international acts are therefore there to enhance the musical experience.’
So in essence, it’s Dilwyn’s festival and he’ll book who the fuck he wants to..! And I applaud that. In fact I cheer it from the tops of Snowdonia, because when you consider the money making pile of X-Factor fodder shite that Wakestock has quickly become, festivals like GGG are absolutely essential to the ‘alternative’ scene (I use alternative carefully as it’s these days a term the industry use to describe banal rubbish like Scouting For Girls, who are about as alternative as the fucking Script… Grrrrrr….). 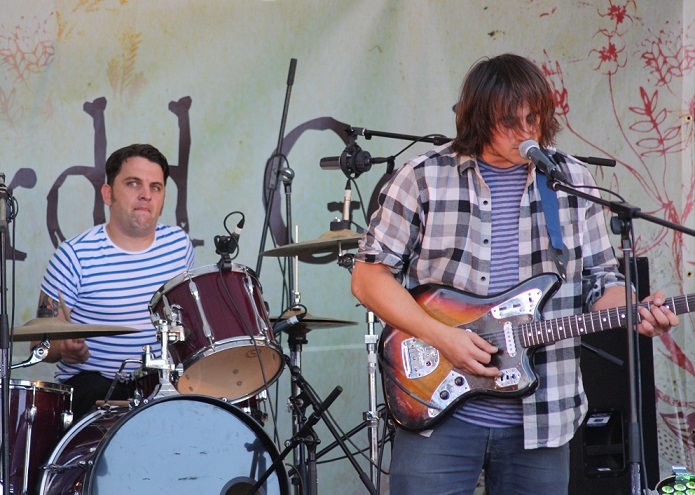 Most certainly Alternative with steel toe-cap boots on, are local heroes We Are Animal; who I’ve now seen 3 or 4 times over the last year, but never like this… They quite literally ripped it apart, they owned the festival, yes, ok, there’s no other band playing at the same time, so they are going to get everyone’s attention, but for those 30 minutes they took what was theirs, and stole what wasn’t too. A truly stunning performance, which owed an awful lot to new drummer Dave, playing only his third gig with them. Now Dave is also the main man in Orient Machine, a band I saw (and reviewed) a coupla weeks ago, and I’m still searching for my socks after they blew them off. He was also in Wrexham’s finest industrial-pop weirdos Gallops, who called it day recently to prevent certain death from killing each other in the tour van.
Speaking to him later, Dave said he was going to learn Welsh so he could understand the rest of the band better; I told him not to bother, as even a professor of Welsh would never decipher that dialect of sewer cymraeg these guys speak! Despite their knuckles dragging on the floor, We Are Animal make an inspirational noise, it’s like a science lab live experiment in creating bliss through sound rather than just songs, and truly fucking superb. 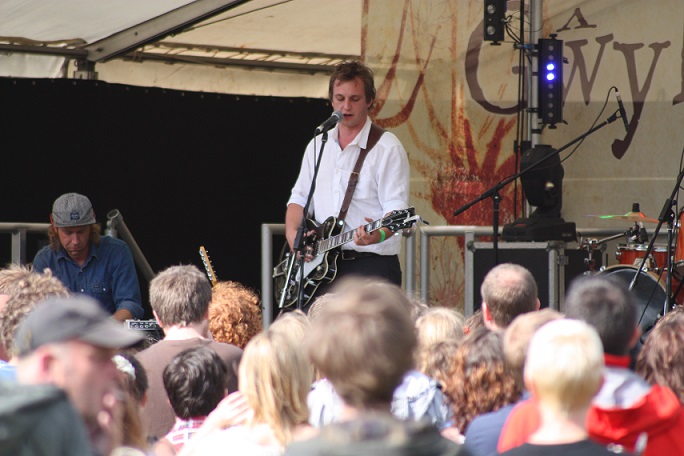 With young Dec Crud yesterday having taken a bollocking of a ‘posh woman’ (his words) for throwing stones at dead jellyfish, he opted to stay at home and kill zombies instead. Shame, he missed a great day – so I had to whizz back to resupply him with a Meal Deal and fresh ammo before returning to catch Willy Mason.
Kyle Lee (a Mexican Walking Fish) and North X North Wales promoter had been buzzing about seeing this American anti-hero all weekend. Me? Well, I had joked that ‘They died with their Willy Mason tshirts on’ – which is a play on a song about Willy Nelson by the Sewer Zombies, only no one (bar Mark Williams, ex-Emily) understood.
Anyway, Willy Mason got by far the biggest crowd of the weekend so far and struck a chord with all those present. Crooning his way through the repertoire as women, and a few men had tears rolling down their cheeks. It was all very country and western, a bit like Kyle’s stuff, only miles better! 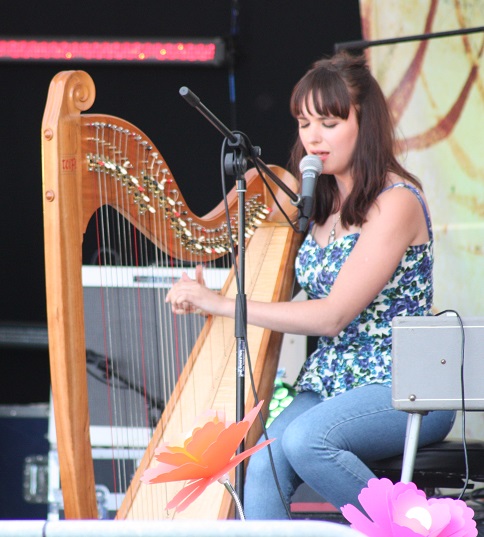 I was gonna say, surprise package of the festival, but it was of no surprise how stunning Georgia Ruth‘s set was. And believe me, I like music / bands that excites me, that make me want to join a revolution or torch a police car! So when a young Welsh girl walks on stage and starts playing a harp, I’d normally groan inwardly and watch with a sack full of cynicism pouring through my biro onto my notepad ready to crucify the poor kid.
Georgia however had an ace up her sleeveless top; she’s incredibly talented, and cast her spell upon all of those who sat before her.
We’re sat with those Non-Stop Parking hell-raisers, Alan Holmes and Zoe. Of Georgia Ruth, Alan quips, ‘She should be everything I hate, but I really like her stuff.’
I agree; this is perfection for the setting – the afternoon, the atmosphere, a far cry from yesterdays punk rock ranting, but just as relevant in my eyes. She is joined by her band and the music ebbs and flows, Blue is about a dog that’s died, Codi Agor is a tear jerking Welsh sea shanty song, and I really mean tear jerking. Truly beautiful… 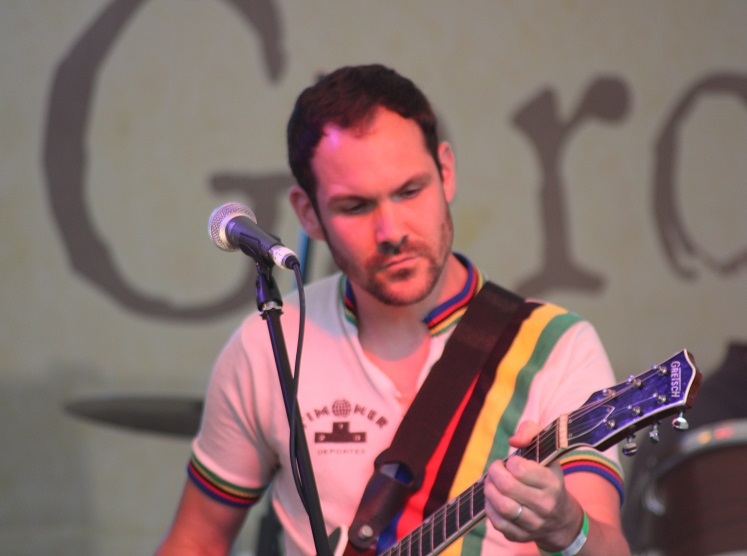 My strange relationship with British Sea Power continues. From back stage in Blackburn to a small field the other side of Llanfairpwllgwyngyllgogerychwyrndrobwyllllantysiliogogogoch, with the Apollo, V festival, the Barfly and Festival No6 inbetween! That’s six times, pretty incredible as I often pass them by when shuffling around my iPod. Watching them today made me realise that clicking ‘next’ is in fact a crime where BSP are concerned, and far from seeing The Decline of British Sea Power, I was witnessing a band still in their ascendency despite being thirteen years to the good.
At The Barfly (or Masque) in Liverpool, they outstayed their welcome, playing for nearly two hours. Here, there wasn’t enough of them to satisfy my greed, ‘I don’t care if you’re British fockin Sea Power, and they’re all shouting for more; you’re not going back on.’
No, there was no encore; the strict 30 minute slot was adhered to, thus no festival essential rip roaring chanting of “Easy! Easy!” was to be heard rippling across the Straits. We did get that other belter Waving Flags with accompanying flag waving polar and grizzly bears, symbols off the sleeve of their latest album, ‘Machineries of Joy’ which emerged last April Fools Day, and like the previous five albums, it has made a decent dent in the UK National Charts. From this album, they played the very cool When a Warm Wind Blows Through The Grass, a tribalistic piece that you urge to get going, but also don’t want the mantralism to stop (it doesn’t). It was a pity they had to. The crowd shouted for more and more, the band on the next stage began playing instead… 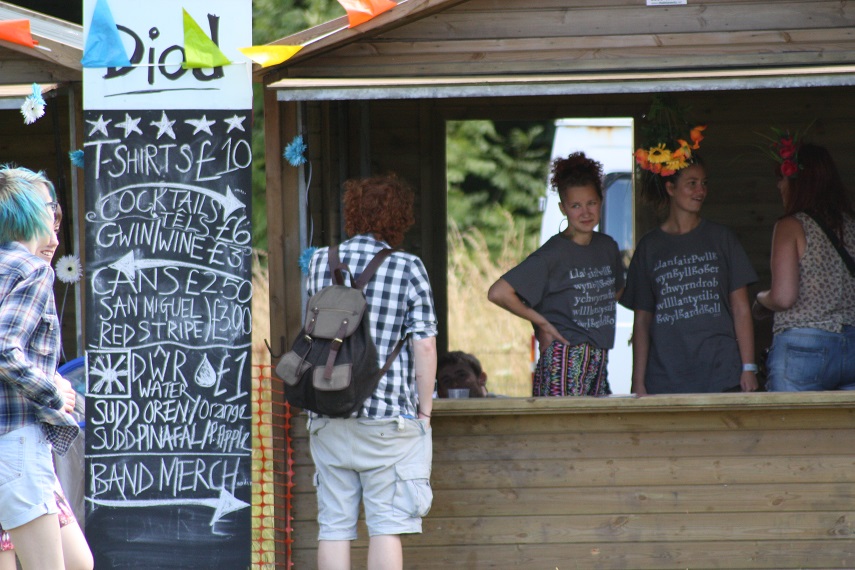 There were a few acts I missed as I do this for love not money, some because I could not be there and some because I chose not to see them, which goes to show the diversity of the music on offer. As far as the future of this great little festival is concerned, Ffion says, ‘Dilwyn already has ideas about who he would like to have at the festival in 2014, but for now the ideas will remain in his head and we will all have to wait until the new year to hear what he has in store for us next.’
And the rewards of being involved in such an event? ‘Seeing the smiles on everyone’s faces as the sun came up on a field full of happy fans on Sunday afternoon was a great moment, knowing that things had gone to plan and people were enjoying themselves.’ Ffion continues, ‘It is always a challenging task to organise a festival, so there had obviously been ups and downs during the preparation period, but then everything comes together and you really don’t remember the stressful times…’

Here’s to next year…