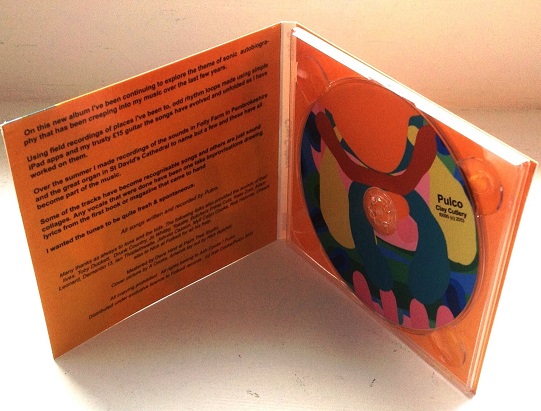 One of my guilty traits is to push aside anything ‘the luvvies’ are raving about… I dunno why, it’s like a built in mechanism… everyone is ranting and raving about Stone Roses in 1989 and I pick up their album a year later. They’re all getting joyed about the formidable, I’ll latch on once the initial storm is subsiding. So when the boys at the front of class (the luvvies – in this instance Walton and that bloke from the Daily Post) are a-whooping and a-hollering about Pulco‘s new album, I’m at the back of class, picking my nose and flicking it at them and would normally listen to it later in the year.

Thankfully Pulco is one of those who does include link2wales in their circles and Ash Cooke (who is effectively Pulco) has been churning out albums like Chav mothers churn out of kids for the Jeremy Kyle Show (usually more than one a year!).
Now, I sometimes wanna grab Ash and shake him and tell him to get out more often, as it’s evident his subject matter is frequently about his rural home, or that’s the picture he’s painted over the last few years. Despite this, his output is still fascinating, challenging, uplifting, inspiring and complete bollocks… Quite often in the same song!
I have been guilty (again!) of painting a mental picture of Pulco being of the ilk producing whimsical folk songs for the sole purpose of BBC royalty money. If found guilty, they’d hang me, and I am VERY GUILTY… Pulco is so far detached from folk as you can get without being anything other than a folk-off to folk. You folking folker.

Clay Cutlery is quite simply a grand album, it’s more art than music, a concept of madness, unrivalled, fucking bonkers and genius at the same time, full of loops, incidental sounds, catchy harmonies, guest psycho vocals (Grass Sleep is incredible), and very occasionally you’ll get a bit of a song, as in The Sceptre (English title, Welsh vocals). I used to get obscure tapes from the underground network by artists like 20 Million Good Reasons (I challenge you to find them!), parts of this remind me of that kind of era, like Suite For Electric Toothbrush, stuff that is there for art’s sake and nothing else, and the Super Furry ‘Phantom Power’ type electro-production-feel of Trial of The Lanyard.
Inspiring…

For more information on the album please visit