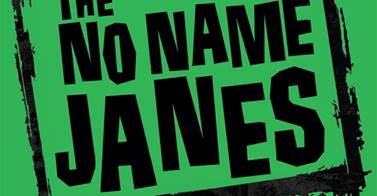 No Name Janes, The No Nonsense Janes would be as fitting a name for this debut album – it slams in with no nonsense, and there’s no let up from start to end.
I was kind of disappointed with the album title, almost felt like The Alarm who often pay homage to their hometown… Then I heard the title track and the rabble rousing verses and the ‘Fuck your home town’ with its terrace chant-a-long hook, and I was caught, hooked and sank by it – what a great track!

Song title of the year belongs to This Is Going Nowhere (You Silly Little Cunt) – a minute and a half of anger, ram packed with volume, guts and garters, as is this entire album. Great sound, great raucous songs, loud at low volume – a sign of of being well recorded, well mixed, well mastered and well fucking written…

Musically, The No Name Janes are on Red Bull, souped up with twin exhausts, hot wired and ready to donut in every car park after midnight… Remind me very much of Direct Hit! (big compliment), and most certainly wouldn’t be refused American visas, for that is where their influences stem from. Every song is there to be sungalong, strumalong, jumpalonged to. Raise your pint glasses, arm in arm with your mates and complete strangers, with the uninitiated, the unappreciated and the ones who fucking hate it, cha cha cha!!

They wear their chords on their sleeves and are not afraid to use them… Bang, bang fucking bang thank you very much Mam… Oh, and in case you missed it, here’s another one for you stick up your pipe and play at your punk rock girlfriend… Hey Jane! What’s your name? Every time the shit goes down, I touch my myself… Love it!

Hometown is one of your Five a Day – be good to yourself, become a sex pest and consume…