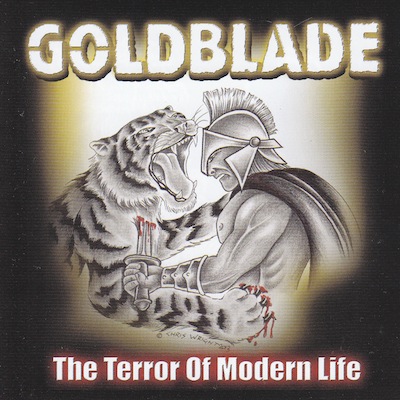 That filthy stinking dirty bass sound indicates the new Goldblade album has started, This Is War has started and it’s louder than war! It spits, it sneers, it fits, it starts. It’s rousing, it’s a rebel song, it’s what you expect from Goldblade, and that’s just the first song!
Relentlessly they slam into Psycho Takes A Holiday and you know even this early on into this album that it is notch or two up from the comparitively disappointing ‘Mutiny’, (despite the amazing singles). There is less Dial-a-Pirate and far more Thrust in yer Face Punk Rock of the highest calibre here.
Having seen the band a fair few times, track three The Shamen Are Coming was instantly recognisable, with that ace Killing Joke guitar riff, it does lag behind on CD rather than live though.

Serious Business is their Johnny Was (SLF), their Police and Thieves (Clash-style), their Jah War (Ruts), and bands can be accused of chucking in a token reggae song just to be cool, but when you’re this many albums into your career, Goldblade have nothing to prove. Nice trippy organ accompanied reggae with dubbed out toasting lyrics that rocks out at the end… Ace.

Guilty is strictly hardcore and as fast as Goldblade will ever be, almost hardcore punk. In contrast, We’re All In It Together kicks in like Then I Kissed Her / Australia (Manics) before transcending into a traditional Goldblade singalong in an East End pub song, although I do wanna sing ‘We all live in a yellow submarine.’ Shame about the key change… tut tut!!

There’s a dearthly 60’s garage psycho feel to Goldblade, but in a modern day angry Stooges underground way. However Someone Stole My Brain is a brilliant chugging slab of Jello inspired genius. It has a Full Metal Jack-0ff  (Doa), type riff and a Plastic Surgery era Dead Kennedys lead guitar sound, the perfect combination and displays the fact that Goldblade can do more than write Oi! inspired punk rock choruses.

Talking of which, ‘Alright… ohhh kay… the world is fucked up nowadays…’ You know that soon  those lyrics are gonna be chanted in concert halls across the land, and that was the intention behind writing The World Is Fucked Up Nowadays, and to be honest, it’s hard to find a dull moment  within the 44 minutes of punk rock on this album.

The closing and title song The Terror of Modern Life is their Troops of Tomorrow (Exploited version), their I Feel Alright (Damned version), an 8 minute epic with an intense cliff edge angry guitar opening, a dirty riff that can only be played while wearing a leather jacket and looking cool as fuck, and a trash the stage ending. Simply brilliant track that you’ll never tire of…

My only complaint is they should’ve ended with This Is War as well as opened with it… fucking love that track, it’s immense…