My ears are still ringing, it’s my own fault; I thought I was hard enough to handle it without my trusted (and often forgot) earplugs. But bugger me (no, please don’t!) – the terms ‘in Rhyl’ and ‘good sound’ don’t usually go together, but tonight they certainly did.
The irony of Gwion (pic below) stating ‘maybe attending’ on the Facebook Event page of last night’s UK Subs gig was washed into stark reality when he found himself stranded on the wrongside of the A55 and unable to play at the Tivoli in Buckley. Maybe he is God, maybe he is a soothsayer, maybe he is Mystic Meg, maybe Gwion is our leader, he’s our new messiah, or maybe he was just fucking unlucky.
As punishment, he had to play two sets, in two bands tonight, for his only other vice is being also in Vices.

Rhyl was being Rhyl when we got there – the council and police were out in numbers, enforcing the law and it had kicked off in The Imperial as some trumped up Council Official lay down the law over weights and measures and someone took offence to it. Y’see, they’re here to Protect and Serve, and you’d be fucked if your weights and measures were slightly out. Or if a 17 year old was on the premises drinking a soft drink, or the music was not to their liking (God forbid! Hang them, hang them all – save us! Protect us! Serve us!) – A message to the police and councils who simply serve to make money from pointless laws like not displaying No Smoking signs and stuff like that… FUCK OFF YOU SCUM (for that is what you really are) – I know the old adage is ‘Go out and catch real criminals’ – but surely scum is what you are, when you use The Law to profit from those who are not criminals?

(pic by mark hughes)
I curse my car for not being big enough, had no intention of being in a band again, Joe caught me at a weak moment when he posted online that he was looking for like minded people to form an unambitious punk band. I approached Gwion cos he’s a good drummer, so you could say Braxton Hicks are a manufactured band! But, that aside, I should’ve got a bigger car to lug the gear round instead of driving with a hi-hat stand sticking in my ear.
This is only our fourth gig, and yet I feel like a veteran and not someone who’s been without a band for over 12 years – but it is good, Joe writes the songs and me ‘n’ Gwion play ’em – simple, and it feels good. When it stops feeling good you should stop doing it. And if you wanna do it for the money and chuck any potential cred you may have down the swanny then learn Sex On Fire, Purple Haze and all the other shit, or be in a tribute band.
I did have this argument online yesterday, and my opponent said he got paid more for being in a tribute band than he ever did for playing in a ‘proper band’ and said he owed rock ‘n’ roll nothing. Point taken… There again, some of us are born a rocker and will die a rocker… 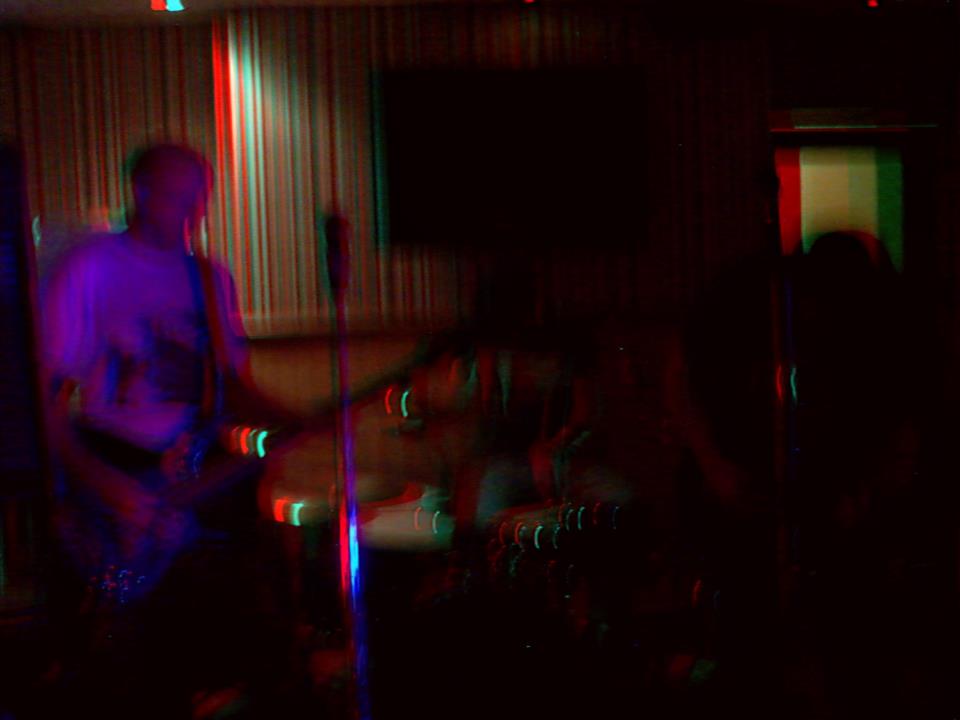 As Braxton Hicks (pic above by Huw Williams) we did toy with Warhead, Fuck You, California Uber Alles (UK Subs, DOA, DKs) when we first got together, but quickly learned (after one rehearsal) that the holy ground should be left untouched and, as angels we should dare not tread upon it. If covers are to be covered they should be the unobvious, or the obvious done in an unobvious way; as Vices did with R.Kelly later on.
‘You’re not famous anymore!’ Was shouted at me last time I played here, and although I never was famous, the contrast of having played continental festivals and Radio One live sessions to finding yourself in a backroom of a pub in Rhyl may have a detrimental affect upon some souls – and yet I was uplifted. I was buzzing (again). I dunno how Jimmy Case felt playing for lowly Brighton & Hove Albion having relished the European Cup glory days at Anfield, but I guess he did it because he enjoyed it.
I enjoyed it – every second of it. Every note, every beat, every screamed lyric, every bead of sweat that stung my eyes, the cramp in my hands, the nervous glances when we fucked up, the muted applause from the people not too sure what to expect from us and the nodded appreciation from those who did.
We added three new songs to the set tonight; Depression, This Song Was Never Written and Poison By Rancid (not a cover) – and the duration was still only 20 minutes (with 5 minutes of added ad lib banter). Maybe the heady days of people coming out in their droves to see unknown bands play live are gone forever, so I guess it’s our job to remove the un from unknown.

Face of Christ (pic above) trouped in, grunted at us, set up and made an absolutely wonderful noise backed by a no nonsense assault on your senses. Old school US hardcore was written all over them and played it chapter and verse with each song coming from the dark recesses of their fucked up minds. From a woman’s right to choose in Scraped Out to those Chester gangsters in Hollyoaks to date rape in Forced Love.
Despite having seen hundreds of bands of this genre while growing up, it’s refreshing to stumble upon bands like Face of Christ picking up the baton and carrying that torch to infinity and beyond. There was nothing infinite about this set though; it was brutal and it was hardcore and they were puritanical with their manifest of seething song of hate. Ace!

‘How the fuck do we follow that..!?’ exclaimed a perturbed Gwion as Face of Christ, wrapped up their guitars and amps and fucked off home without so much as a ‘Goodbye.’
Well, the advice to Vices is to get on and do what you do. And they did so with a blend of heavy guitar driven rock with some dark lyrics of their own and riffs that doff their caps in the AC/DC, QoTSA direction. Saving the best til almost last was the resentful and very excellent I Hate Myself – where singer, Llion screamed, ‘But I hate you more.’
A bit of light banter with the drunks in the crowd led to their version of R.Kelly’s I Believe I Can Fly, played in a Me First & The Gimme Gimmies style, which is where it should’ve ended rather than degenerating into a crowd pleasing Time Warp parody, but hey, they’re entertainers and they entertained.