“What the Dickens” Gerald Charles Dickens at Bulls Head, Beaumaris 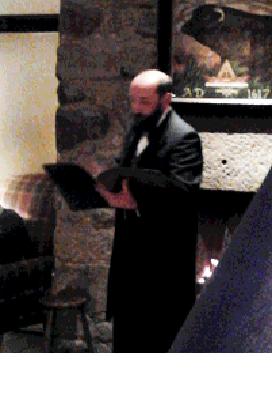 That’ll be a different sort of gig, I thought to myself…

I’d read in a local paper that Charles Dickens’ Great Great Grandson Gerald, was to appear at The Bulls Head in Beaumaris; Over 150 years after Charles himself stayed in this very pub when he reported on the sinking of The Royal Charter (1859) for The Illustrated London News. the same time as reporting on this tragedy; Charles also wrote a review of the pub’s fayre for The Uncommercial Traveller – a scathing review!
Back in 2012 and the atmosphere was terrific – the bar was packed, Gerald, dressed in frock coat and colourful waistcoat and scarf, stood in front of the crackling open fire; and read several excerpts from his Great Great Grandfather’s works, and also, the ill-fated review! Real ale flowed, cockles, roast chestnuts and pork scratchings were on offer, and of course, dishes of lamb, rabbit and dumplings available in the brasserie. Staff appeared in traditional Dickensian clothing too.

Our host did a series of 3 readings that night, and very animated they were too – when he mopped his brow throughout his enthusiastic performance, it was not simply for show! He also happily answered questions and engaged in discussion on Charles’ work. I was presented with an opportunity to speak to him later on, and decided I would ask him a burning question…

“What do YOU make of the food at the Bull’s Head then Gerald?” I quipped,

“Aaahhh…” He replied “I haven’t had the chance just yet!” And with that made his way to the Brasserie. Maybe we will see his review sometime soon. What will it hold, I wonder?