If you type “Gavin Lawton” into the search box of this site, you’ll see he’s all over it like a fucking rash. For well over ten years he’s been updating me with this new band and that new band he’s formed, but with very little further output and very little longevity. Maybe he’s such a twat that he’s can’t get on with anyone thus the short lifespan of his bands.
So maybe, just maybe Gav teaming up with drummer/vocalist Mike is the pairing needed so we can see and hear more.
The Maligned describe themselves as a two piece punk band with a twist, and they are exactly that. The 8-track demo I’ve had tripping about the cyber-ether for a week possesses energy, spark, DIY, and a simplistic punk ethic. I believe 3 of these 8 are to find their way onto an imminent EP. My favourite is probably the opening track Soul of The Sun, which starts like a schoolboy band rehearsing during their lunchtime, but before you know it you’re being swept up by that energy, the anger. You’re both excited and annoyed by merciless voice, grating at you – but it works really well. 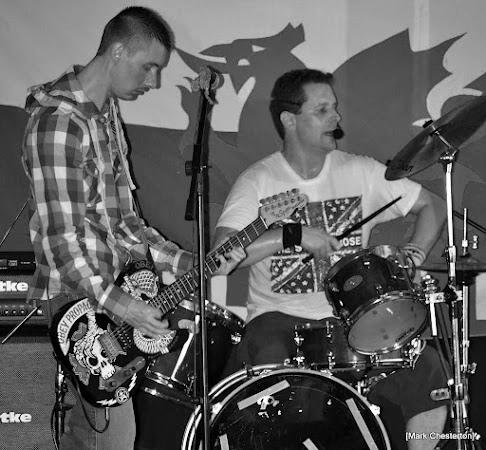 The idea of a two-piece is ace for gigging… shove a kit and an amp in a car and play. Split the cash and you’re onto a winner. Where the let down of being ‘two’s company’ is perhaps why The Maligned’s neighbours Bright Young People recruited Jamie Cardno on bass – it gives you that extra set of bollocks. And listening to the crescendo of Flying So High, it is screaming for that added bass element that would propel the songs up a level. Having said that, it’s still an excellent song and an enjoyable experience, with Mike’s relentless John-Cooper Clarke-like voice complimenting Gavin’s relentlessly rasping guitar.
MySpace
Twitter