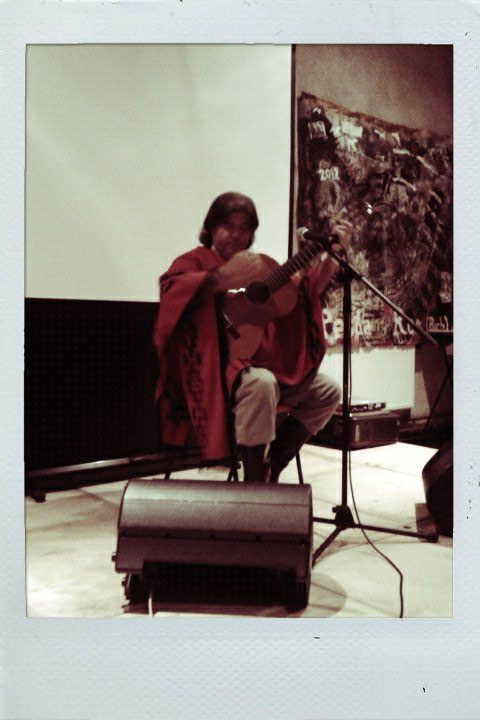 Myself and my bezzie Barry Starmer have a knack of picking really good, different nights out, like attending a private view at a gallery that turned onto a rave; and a trip to see a band in a prestigious North Wales record shop culminating in a trip to see the same band on the same day in prestigious South Wales record shop!
Attending the screening of Gruff Rhys’ SEPARADO at Neuadd Ogwen was no exception!
It was a particularly cold night on Bethesda High Street, the full moon catching the snow-capped hills behind Bethesda, I should imagine reminiscent of a town in Chile in winter…

As you probably know, the film catalogues Gruff’s tour of South America, in particular Welsh speaking communities of Argentina. Alongside his tour he is conducting a search of his own ‘family forest’ and in particular a musician and relative called René Griffiths – whose family had moved out to Patagonia in 1880 following a horse race and a death, alongside other Welsh men, women and children to avoid persecution in their homeland. Gruff saw René Griffiths on TV in the 70’s and discovered he was distantly related. His travels covered towns and areas like Chubut, Trelew, Gaiman, Trevelin and The Andes. Areas still strong in Welsh language and traditions eg. Eisteddfod and music.

Dilwyn has been busy over the past few years in arranging gigs, events & festivals in the area, and this night held a further as he announced that René Griffiths was about play! (So thank you Dilwyn, Carys, Iwan and others who helped in this event.)

Sure enough, in strode a tall dark stranger complete with boots and red cape, guitar in hand, a real troubadour!

He chatted in Welsh (with a Spanish accent) and played guitar in the Argentinian style. He spoke of the origins of styles of music, of language, of history… His songs were of drinking, lost loves and life. Some were in Welsh and some in Spanish but all were absolutely beautiful and charming, played in René’s very feeling and emotional style! We Welsh always think of ourselves as a proud bunch: Poets, artists, defenders, romantics; and to see this man at work was wonderful. “Heno, Mae’n bwrw cwrw” for example.

This night awoke something in me, my Nain from Bangor (now deceased) was born in Gerlan and if I have it correctly, her Taid came back to Wales from Patagonia, so who knows, maybe our relatives passed each other on the way? Evidently I have some researching of my own ‘family forest’ to do. My father-in-law now lives there now, so that’s my wife on board too!