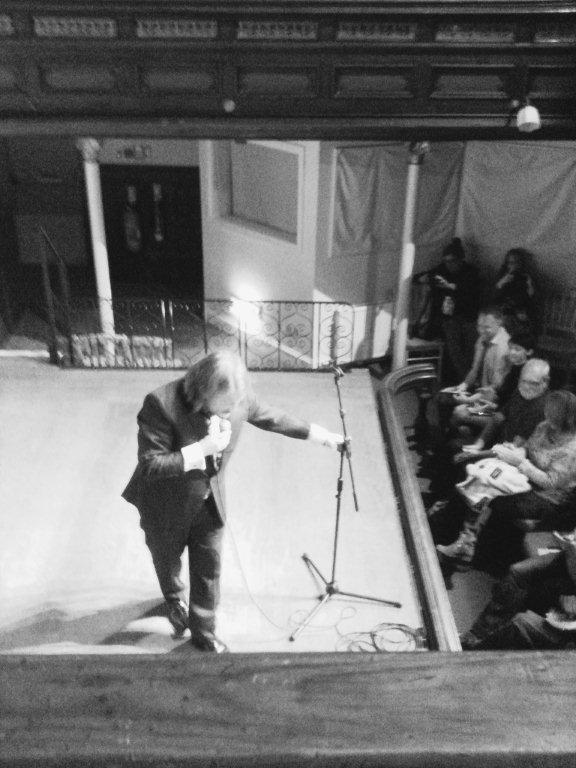 Now in its third year the Machynlleth Comedy Festival is well on its way to achieving its vision of a boutique comedy festival taking place in Wales, taking inspiration from other unique Powys events that grew from individuals with a passion for the arts, such as The Green Man Festival, Hay Literature Festival and Brecon Jazz. It boasts the kind of top-quality line-up that’s beyond many of its rivals; it’s a small but perfectly formed antidote to some of the more sprawling festivals coming up.
The headline act on Sunday was Richard Herring who was playing the rather wonderful Tabernacle, which is a former Wesleyan chapel. It has been converted into a centre for the performing arts. The Auditorium of The Tabernacle has excellent acoustics and pews to seat over three hundred people. It is a surreal place to watch anyone never mind a blaspheming comedian.

At the end of his Edinburgh Fringe show Christ on a Bike last year, Richard Herring usurped the atheism of the majority of his audience when he asked them if they believed in one true love. That concluding flourish in turn has laid the foundation for this discourse, one that has a simple mission; “to destroy love”.

He starts with quoting Welsh, poet philosopher “Howard Jones” who in 1983, apart from having a stupid haircut asked the question “Does anybody love anybody anyway?” He goes to investigate another un-provable supernatural force so many people put blind faith in. That and the fact that after a lot of wild-oats sowing, he’s been with his girlfriend for three and a half years, and feelings that she could be The One made him question his own emotions.

Coincidentally, it turns out that it is this tension between instinct and intellect that ended Herring’s relationship with actress Julia Sawalha. Herring had admired Sawalha since her Press Gang days and featured his passion for her in sketches on the Fist of Fun TV series, with Stewart Lee. Herring tells us that Sawalha was very spiritual whereas he was decidedly not. “I am 95 per cent certain fairies don’t exist. I prefer medicine.”

A powerful orator with tricks up his sleeve Herring takes off and lands this two hour show with ease, helping it home with a frenzied rant about buying his current girlfriend ever more Ferrero Rocher to satisfy a romantic pledge.

It ends with a beautiful, Daniel Kitson type melancholic story about his centenarian grandmother who sadly has dementia which brings tears of empathy as well as laughter, before bringing the show to a satisfying close.

I have been to the Edinburgh Fringe quite a few times the last few years and whilst Machynlleth does not reach the commercial giddy heights of that festival , the intimate, friendly feeling and quirky feel to the event in such stunning scenery makes me much more likely to choose this one from now on. The line up matched Edinburgh and the surreal sight of seeing mad cap “Tony Law” previously in Machynlleth Bowling Club is one that will live with me for quite some time.