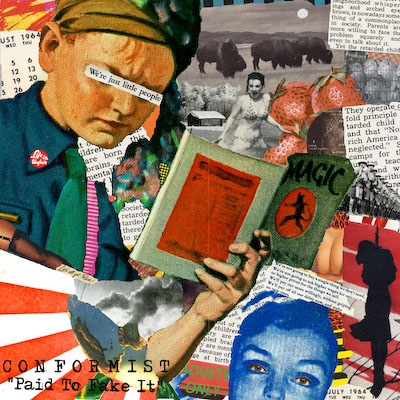 Conformist releases his new album ‘Paid To Fake It physically on Monday the 6th of August it’s available to download via all good digital outlets now. This follows on from the well-received single; the crunchy dynamics of ‘Savages Go Modern’, which resulted in a BBC, live session and extensive coverage.
28-year-old Michael Simmons is the man behind Conformist, hailing originally from the picturesque village of Dale in Pembrokeshire. Michael’s musical inspiration quickened with a move to Cardiff’s beckoning City lights.

‘Paid to Fake It’ is an extraordinary album of post-modern dexterity. From opener and first single the crunchy 808 dance rhythms of ‘Savages Go Modern’, through ‘Ladybug Ladybug’ that’s bewildering use of cut up menacing apocalyptic samples (“Everybody’s Dead”) are driven by thudding beats, post punk guitars and futuristic off the wall Art of Noise-esque soundboard hits. To the deconstructed dub step and movie quotes of menacing album track ‘Post Death Sales Spike’ to the nightmarish arcade sounds of ‘Mr Grosse and Mr Playfair’, Conformist presents you with his enthralling but dizzy rush of ideas and noises. Conformist’s glum swatches of electronic sound offer a neat line in humour too, morally bereft and cutting to the punch line, exposing cliché and avoiding it. Thus his work is built for the dance floor as much as it is for thought provoking head moving headphone sessions in the dead of night.

In the past Conformist has gained airplay on Steve Lamacq’s on R1 and Adam Walton’s Radio Wales show and earned the praise of local tome The Miniature Music Press and the influential Careless Talk Costs Lives magazine.Whisperin and Hollderin called his work ‘audacious and brilliant’ while the Daily Post hadn’t heard anything this weird since ‘Aphex Twin’.

Conformist is also the driving force behind Cardiff’s newest audio production facility, Smash Mastering, offering mastering, mixing and acclaimed remixes. See his work on local boys Kutosis‘ track ‘Islands’ and Bury Me in LA‘s ‘Young Lust Seekers’ these served as a taster for his recent single ‘Savages Go Modern’ and the astounding full long player ‘Paid To Fake It’ out this August!