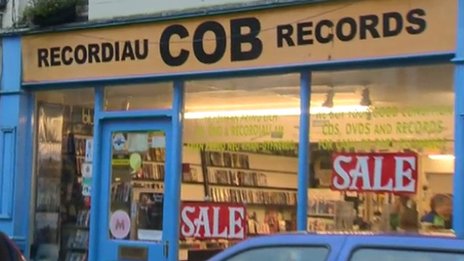 (from BBC news)
One of Wales’ most famous independent record shops is set to close, its owner has revealed.  Cob Records in Bangor, Gwynedd will shut its doors in March after 33 years.  It is renowned throughout the UK after setting up as a spin-off from the original Cob store in Porthmadog, which is unaffected by the announcement.

Owen Hughes from Cob said online sales, music downloads and falling CD sales, meant the shop was no longer financially viable.  “It is certainly a sad day for us, and I think a sad day for a lot of the loyal customers we still have,” said Mr Hughes.  “We tried to create a buzz about the whole music scene in general, because that’s what we are interested in, but economic forces have pushed us in to this decision – it is impractical to go on. “The lease on the shop is coming towards an end and I had to decide that now is probably the time to get out.”

The record store first opened on Bangor’s High Street in 1979, after the success of the second-hand vinyl record shop that still runs at Porthmadog.  For more than 30 years the Bangor shop has been a beacon for music enthusiasts and record collectors from across north Wales and north west England.

It has also been an important breeding ground for Welsh bands, with partnerships formed as members browsed the thousands of vinyl records and CDs stuffed into the shop.  “I like to hope it has played its part,” said the record store owner.

“A lot of our customers are heavily involved in music in various ways, whether they are in bands or come in regularly to pick up an album, buy a CD or go to a gig. BBC Wales music presenter, Adam Walton, lists Cob Records in Bangor as his number-one favourite record shop.  “If this was an opera house or a theatre, then this would be grabbing people’s attention,” argued Walton.

“But people don’t necessarily realise the value of somewhere like Cob Records.  It is not just about the records. It has a powerful social value. Cob Records is much more than a business.”
The music presenter said that store was one of just five left in Wales where independent Welsh artists can showcase and sell their material.

“If it goes – then four will be left – what then? For artists trying to make it, it can tip the balance,” he warned.

(Neil Crud)
Cob wasn’t only a record shop, it was a community centre.. Where else would you find the likes of Whales playing in store on Record Shop Day? (click pic)