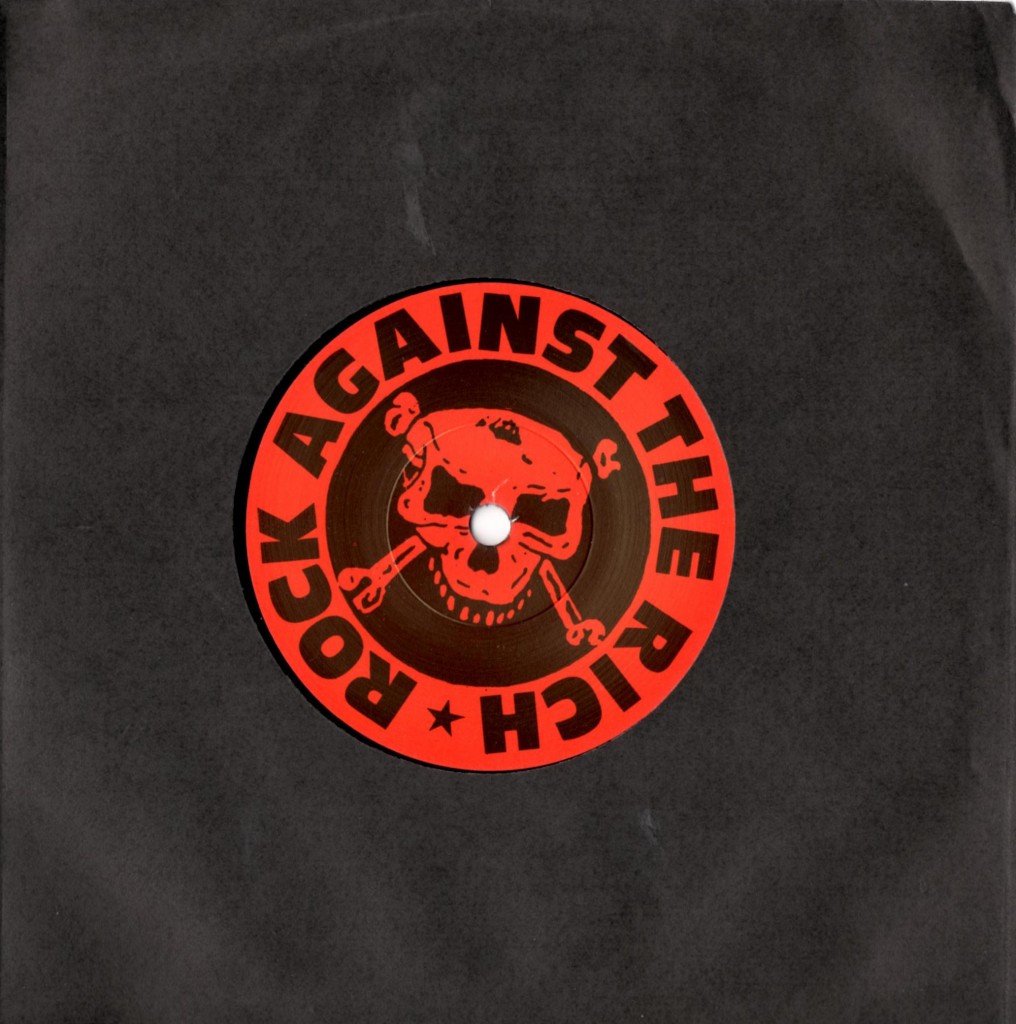 Anhrefn were busy during this period, we had released our first album ‘Defaid, Skateboards a Wellies” on the Worker’s Playtime and  were generally out and about doing gigs around the UK. We had also already started to tour Europe from early 1988 and the NME was the weekly read in the tour van. We’d check out NME for any reviews or whatever and on this particular day a tour by Joe Strummer had just been announced under the banner of Rock Against The Rich.
Being huge Strummer fans we immediately checked this news article out to find that we were listed as Anhrefn, as one of the support bands on the tour. First we’d heard. Exciting, but could this be true ? The tour was being organised by Class War and at the end of the piece they gave a London number for more details. This was before the days of mobile phone. Maybe we used a kiosk, maybe we waited till we got home but I’m sure no time was wasted.

On the other end of the line was a bloke called Matt Runacre who said “I was hoping you’d phone”. So it was true, they did want us to support and he’d used the NME as a way of getting us to contact him. Again you have to remember this is pre- Facebook, pre Twitter pre Web. Most of our gigs were offered by letter through the whole fanzine and Animal Lib scene – all very underground, sometimes people would phone but it’s amazing to think that we would go all the way up to Newcastle to do a gig on the strength of a letter. These days you would not leave the house without your mobile phone and would not ever consider going off to do a gig without at least a lengthy email conversation and a final confirmation of terms etc

Strummer had been out of action for a while, the Clash had ended up with all sorts of legal wrangles so this was brilliant, Strummer back on tour, a tour for Class War, a tour called Rock Against The Rich – count us in.

Our first official date on the tour was meant to be at Confetti’s in Derby. This was cancelled / banned. Here we go we thought, another Anarchy in The UK Tour. Matt must have felt sorry for us so he offered us another date up in Newcastle. Soundchecks ran late in Newcastle – we did not get a chance to play. But we got to sleep on Strummer’s tour bus as compensation. Strummer and band had a hotel – we had our transit and no accommodation.

Matt was OK with us. In the morning I snuck into the hotel for a shower and breakfast. No one noticed. Matt clocked me but was totally cool. “Come up to Edinburgh there’s a better chance of having a slot up there” so we ended up following the tour bus up to Coasters in Edinburgh. As we arrived we nearly reversed over Strummer – he was quite small, lucky we didn’t hit him !

So we soundchecked and got to play 3 songs as the doors were opening. I think we actually started the set before anyone got in but by song No 2 there were around 60 punters down by the stage. By the time we finished song No 3 we were off the stage. By that point 200-300 had got in. They must have thought “Who the fuck are these ?”

Strummer thanked us later on during his set but called us “Aphren” so the punters were still confused “Who ??????”. We didn’t care. We go to play, we’d supported Strummer, and we got on with Matt. “Do you want to play in Merthyr ?”  Too right we did but that date was another one that was banned. So we were offered Bristol.

At the Bristol gig I actually phoned home on the venue kiosk so that Nest my wife could hear Strummer soundchecking Spanish Bombs. By this point on the tour Strummer was operating on full throttle. To be honest with Anhrefn we were never intimidated, never worried about doing supports, we were young and cocky, so we treated each gig, even support slots, as our gig, at least for the duration we were on stage.

That night we watched Strummer from the side of the stage and you could see that this man was easily one of the best and most driven performers we had ever seen. In a way he was way up there with Springsteen and Costello giving it 200% and more. You could see Strummer dragging the band with him, forcing them to equal his 200%. This is one of the best gigs I have ever seen. (The other two best gigs of all time would be The Ruts at the Music Hall, Shrewsbury and a Ritchie era Manics at Newport Centre).

After the gig we got to talk to Strummer. This time he called us something else, it’s not easy is it to get Anhrefn right. Peel never did. Strummer asked me where we were playing next and I said we were off to the Isle of Man for a couple of gigs. He said “great band”. Ehhh ? He thought we were playing with Swansea band Man. I just went with it. This was the great Joe Strummer after all, I was not going to say “no Joe, the Island not the band, we’re doing some gigs on the Isle of Man !”

That was about the only conversation we had with Strummer, a funny and bizzare mix up about the Isle of Man. He would ask us to pronounce Anhrefn for him before going on stage but that was it really. Most of our time on the tour was spent hanging out with the main support band One Style MDV a reggae band from North London.

We ended up doing loads of smaller Rock Against The Rich gigs with One Style up in Hackney and Stoke Newington and in return we invited them up to Wales to do shows with us. The first time was a benefit for Survival International at the old Majestic venue in Caernarfon but they also played with us at one of the Eisteddfods, maybe it was in Tredegar. Just think this was a gig for Cymdeithas yr Iaith with a roots-reggae band, a Rasta band – yep it actually happened.

We also promoted our own Rock Against The Rich benefit at TJ’s in Newport with Cowboy Killers, Ian Devine and a very young Ffa Coffi  Pawb. The gig was billed as “Rock Against The Eisteddfod”. The gig never happened.

My version of the story is that Ian Bone from Class War had started to put out stories in the press that this was a benefit for Meibion Glyndwr and the Holiday Home arson campaign. We were still out on the Isle of Man when we heard that the gig had been pulled following a visit by the police to TJs and the Western Mail had run a story about Meibion Glyndwr raising funds. As I said at the time “I was not aware that Meibion Glyndwr had a bank account”.

We will never really know, maybe it was funny, the gig never happened and years later (‘94ish) I put on one of the early shows for Catatonia at TJ’s and John from the venue still said “you’re that bloke that got me into trouble with the police”. No it was Ian Bone !!!!!!

The “Be Nesa ‘89” single by Anhrefn, an anti-Thatcher manifesto was released as Anhrefn 015 catalogue number but had the Rock Against The Rich logo on the label. We kept doing stuff with One Style, there is even a unfinished / shit version of ‘Bankrobber’ in Welsh doing the rounds on the internet. It was well intended but never really finished properly in the studio. Mickey Dread was going to mix the tapes. Great idea. Never happened.