Ooh, this is quite exciting really, my very first blog. Nobody’s ever asked me to do a blog before. Which makes you wonder why they’ve asked me to do it now? My guess would be they feel sorry for me. I mean, me, what a fucking has-been. It’s been 16 years since my band’s (Magic Moments At Twilight Time) last album (“Creavolution”) [pic below], but I do intend to make some new music. Soon. Honestly. Not that the band was what I was really best known for anyway, that would have been the Music & Elsewhere underground music label.

Now the lights go on in people’s heads. “Aha! They used to release some cool music, including wonderful Welsh artists,” you see what I did there, “like Sons Of Selina, The Original Mind Band, Steve Andrews and Alphane Moon!” Indeed we did, along with hundreds of other albums by bands from all four corners of our round planet. But that too came to an end with our 599th release (tell me about it!) in May 2003. After that I went into a bit of a decline.

However, I haven’t just been sitting around waiting for my comeback ever since. Oh no, I’ve been making an art-form of procrastination too. When M&E entered its dormant phase, I was still quite new to the computer generation. I’d not bought my first PC until late in 1999, but paranoid Luddite that I was (the global underground at the time was all done with letters, postage stamps and cassettes, you understand), it remained in the box for three months and mocked me contemptuously from dark corners. I almost knew what I was doing with it by the time I lost loads of contact information in 2002. Almost. So, merely two years after that, I confidently thought, “I know, I’ll do an online magazine instead of the one I made on paper with a typewriter, Letraset and a plastic rule! How hard can it be?” You’re pointing at me and laughing, aren’t you? Well, it’s okay, no need, I made myself stand in the corner with a pointy hat on for a couple of hours. Punishment enough, you can stop sneering through the haze of my smouldering abacus now.

I think it must have been 2005 that I spotted my name mentioned on some online forum about cassette culture, and you can press me all you like, but I will never publicly admit that I only found it coz I’d been googling myself. I mean, how sad would that be? So I posted a response saying I’d heard I was dead. It turned out I wasn’t, and quite suddenly, I found myself back in touch with loads of old friends and music contacts “from the day.” It had quite an inspirational effect, I can tell you, and I immediately started thinking about doing that online magazine again. Two years later, March 11th 2007, would see the 20th anniversary of the very first release on what would become the M&E label. It’s almost poetic, isn’t it? I mean, what better time to start the webzine? So I sat down and began the intense planning; working out all the kinds of content I could include, chatting to contacts about potential interviews, designing new logos, working out an online style that wouldn’t be too far adrift from the DIY spirit of the golden age and coming up with a name – The Magic Net. It was a plan in motion, nothing could stop me now! 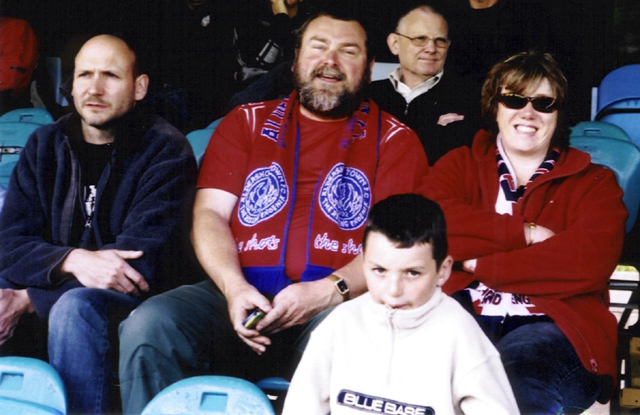 And nothing could still stop me now when I was chatting to Neil Crud about it in Rhyl over a year later in the May of 2008. [pic above] There was I, just talking about it, and driving a bloody taxi. And there was Neil, still living the punk dream. It put me to shame. He invited us round for Sunday dinner, we went out for a nice walk with his dog, then he took us to a karaoke night at his local pub. I love that rock & roll lifestyle. Okay, I tease his cool reputation by making him sound like a middle-aged dullard (he is, honestly), but he did drag me along to a gig too, probably the first one I’d been to in aeons. It was a band called Valleum and they were really so excellent that I was much less conscious of all the young people thinking I must be someone’s dad looking for them because they were late home for tea, and he made me promise to buy one of their CD’s after the gig, which I would have done, only they’d forgotten to bring any. I left North Wales really starting to believe I wanted to do this again, it reminded me just how much I had missed the music and the energy. I even started to doubt that I really needed slippers at all. Oh yes, the chains were off, it would take something absolutely shatteringly life-changing to distract me from doing that website now!

The following month, I got a letter saying; “You know you were adopted at birth 50 years ago? Your mother would like to meet you.” You’ve guessed, I did find that quite distracting. Within a month, I’d gone from being an only child to being one of five. Everything changed. Voyages of family discovery took precedence over a return to musical spheres. But, all was not completely lost. As luck would have it, my maternal brother persuaded me that social media was a useful tool. When describing me, he leaves one of those words out. Poor Mickey. So, I actually did something (which constitutes slightly more than nothing whatsoever, he added smugly); I started a Mick Magic account on Facebook, and a United World Underground page too! Hey, you can subscribe, send me a Friend Request, “like” the UWU page and look at all the nice photos, how cool is that? From little acorns… a twig has to eventually poke it’s head through the soil. By 2010, I was getting well serious. I’d bought a nice big home-study course on website-building so I would have the means to do the job properly, and a domain name to make sure I was fully incentivised. Global internet domination couldn’t be far away now.

Only it was about that point that I suddenly stumbled across my paternal birth family too, and that caused all kinds of complications that I wouldn’t dream of going into here, but it turned out I wasn’t an alien after all, just Irish. I accept it’s a subtle distinction. And also about this time, Sam and I, who had been together since she was Sensemillia Peach on our “Zoen Nostalgia” album back in 1989, decided we wanted to get married and spent the next year being distracted with that as well. We finally tied the knot in Devon in April 2011 and I came down with flu on our honeymoon. Seriously poor Mickey. After that we started making even more plans for big changes, like finally escaping from the madly overcrowded south-east, for example. BUT… to my credit, I did actually get as far as putting up a holding page for that website (www.mickmagic.net if you don’t believe me) before we put that one into practise. That was March 11th 2012, the 25th anniversary of that first release, where do the years go? Where do my slippers go? This June, we moved from Surrey to Lancashire. We wanted to be closer to Crud, what can I say? Moving home is a nightmare. If you ever have to do it; do it once, get it right. I’m pleased to say we did and I have a nice little office/studio to work in now, so I’m actually starting to do stuff again. And I’ll try very hard not to be distracted by the next big life-changing event that comes along, the one that started with Sam shaking me and saying, “Mick, you might want to be awake for this.” Then waving a little wee-covered stick under my nose with two bold blue bars on it. Due date? Would you believe March 11th!

So, here I am, making slow progress and still trying to find my feet. I don’t know why though, it’s not as if they ever stray far from the bottom of my legs. It’s not like I’m going to wake up one morning and find them in the bottom of the wardrobe. No, life is rarely so simply. I will be back, of that there is no doubt. But, while you’re waiting, I’ll try to make this blog worth the read and you are very welcome to a nice free CD highlighting the great diversity of the Music & Elsewhere label and the United World Underground project. Just send a us a stamped (£1.20 will cover it) addressed Jiffy Bag (proper CD in a case size) to me at Asgard, Hackensall Road, Knott End-On-Sea, Poulton-le-Fylde, Lancashire, FY6 0AX. And if you happen to be in the area and you fancy a coffee… there’s a café by the ferry point.