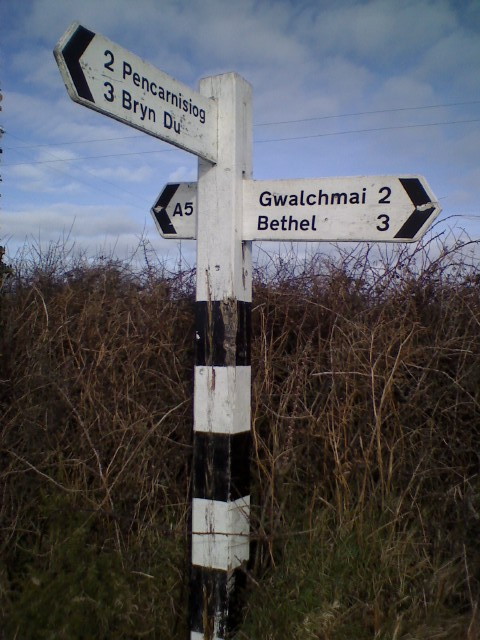 A5 were a Welsh language Hip Hop and dance loose collective/catch all project I created/produced from 1988 to 1992ish. Musical collages featuring a snapshot of youth culture recorded for the main in little studios around North Wales and beyond and my own back-room Heath Robinson set up in the tiny village of Gwalchmai, of tape decks, analogue keyboards, samplers from Argos and record decks mastered on 4 track cassette decks.
Not quite a ‘cast of thousands’ but any hopes of a re-union gig for a few grand off Bryn Terfel at The Faenol or a middle aged D.I.Y. nostalgic reformation ego trip are I’m afraid dashed. The ‘band’ was a rolling chaotic adventure in sound. Few, if any, cover versions abound and apart from being sampled by Tystion in their heyday I can’t imagine anyone doing a Karaoke version of ‘’Parti Butane’’ or ‘’Adroddiad Du’’. Maybe the acid test of a good band, ho hum.

A5 featured various guest vocals, including one Peter Hughes from Llangefni (Pete Alien Matter) who to this day goes into his rap about the nuisance of low flying jets over Anglesey (‘’Chwarae Tom Cruise’’) every time we meet somewhere random.

One girl turned up to make a record after being dumped by her boyfriend from Holyhead, sat on the floor, swigged a can of Special Brew, grabbed a mike ranted ‘The Waster’ and I never saw her again. The track became a favorite of Nia Melville on the radio and played a lot around 1990. A5 attained global airplay here and there and dropped some awesome videos on S4C (Fideo Naw, Syth etc)

After a while the subject matter began to get repetitive and I moved on to harder dance 12”ers, ‘proper songwriting’, TV work and wild Avant Garde Experimental Soundscapes gobbled up by the London music scene such as XFM and Resonance FM.

Skip a generation almost and in the hamlet where I live, Gwalchmai, not much has changed. Anglesey has an acute housing problem, there are as many if not more holiday homes and work or decent paid career jobs are as hard to come by as ever.

Gwalchmai has something of a ‘reputation’ and when a girl rang in to Owain Gwilym’s BBC radio show in the early 90’s he said ‘’Oh there’s lots going on in Anglesey, you’ve got groups like A5’’ The line went dead and the girl from Llanfair PG eventually said ‘’Yes I know, but they are from Gwalchmai’’!

As Johnny R, I inhabit the nether world between reality and unreality, as Andras Millward summed me up, ‘’A knack of always being on the fringes’’ I notice the un-noticed, the backgrounds of photographs, occasionally polish rough diamonds or those that somehow slipped through the net, people worth the effort. I’m even on the fringe of ‘Normal Village Life’’ I’m no youth leader, no Gai Toms setting up community projects, no football captain hero who scored the winning goal in the Dargie Cup in 1989 and everyone still buys him a pint when he walks in the pub because ‘’He’s a sound bloke’’

I do though have a unique visionary, creative radar and sometimes you can see something, put the building blocks together in your mind’s eye and spew out something worthwhile. Those blocks, albeit a new generation, are around Gwalchmai.

Recently I was put on the spot in a party by someone demanding to know the meaning of a throwaway animated web drama a did on You Tube ‘Ardal 16’. I’d no idea, had forgotten it and had to watch it myself to get any notion of the thing. (Baffled me and I did it!) Creatively you often work in a bubble and it’s strange when you get a reaction to anything.

Don’t get me wrong, there is youth creativity, much or less controlled by families who push their kids into ‘healthy’ supervised banal activities like cake making competions at Winter Fairs, Eisteddfodau, Yr Urdd, Young Farmers Knitting Class. Here, where only three enter, your kid is bound to come ‘somewhere’ and the doting parents photograph the ‘achievements’ for the ‘papur bro’ (local newspaper) and probably have a seat on the Parish Council getting stressed over a fallen wall for 6 months, writing minutes no one reads or being ‘pillars of the community’ before being rumbled as the worst swindlers in town. These kids are driven door to door to Schools which defy the term ‘catchment area’ presumably in case they get contaminated by the people who live 100 yards away. Their future is mapped out, off to Uni, average jobs, safe family life and become as boring and dull as the parents. Anything creative they do is not edgy or crucial or downright ‘rhemp’, it has no soul. I doubt they are for the Johnny R treatment even if polite and well educated.

However, something stirs, as the next generation of listless ‘teens with attitude’ seem to wander around in pyjamas glued to Smart Phones, (if not smart water) they are a polarized bunch, one minute it’s all ‘’BBM me baby, we love you’’ then the vitriolic ‘’Argol, what the fuck is that shirt he’s got on’’ or demanding to know ‘’What you been writing about me on Facebook then?’’ Cute but treacherous, the ideal combination for rebellion.

The self-appointed leader of ‘The Gwalchmai Massive’’ seems to be Kyra, a talented dancer, you can while away your time asking her deadpan questions like ‘’What colour is your toothbrush?’’ if you have that much time on your hands, she’ll probably reply. (Woop Woop) http://ask.fm/KyraaBachh

But, and here’s the rub, why bother spending hours learning guitar, singing or dancing giving up important social time when you can call your teacher a cunt for scribbling all over your art work, humiliating you in class when you get home from school that afternoon on Twitter?

Studio Recording seems more a ‘birthday gift’ now; professional karaoke of a ‘hit of the day’, nothing original or anything kids can get off their chest through songwriting. To be fair they don’t seem as hellraising as their parents who were less hellraising than theirs. A girl in the village called Ceri has a pair of lungs on her to blow away most entrants in X-Factor, if she could be arsed or see the point. Generally I’ve no idea who does what but there is talent around here. Kids get enough preaching in school, college, crap Saturday jobs, creativity should be an escape-valve in my opinion, not ‘controlled’ you can shape it, point them in the right direction and let them get on with it.

Today’s A5 would probably sound like Nicki Minaj with a mid-Anglesey accent.

‘Old School’ A5 were treated most professionally by the media in general with videos by top Welsh Directors such as Mali Evans, Rhys Powys, Geraint Jarman himself among others, you knew the whole thing would be worth watching. I don’t hold with the Sain/Dafydd Iwan ethos of ‘Roc y Bro’ of lame fireside crooners with low aspirations who hide behind the language in fear that exposure would ridicule their ‘talent’, how many top Welsh language ‘acts’ go anywhere near X-Factor or BGT? Hmmm, sorry we won’t be asking you to Boot Camp, Meinir Lan Lloft.

If a nation doesn’t dream, it’s a pretty dead one, you might never tour with Lady Ga Ga but dream for God’s sakes, the journey might be great.

Looking around the schedules of S4C when I wrote this blog there is no dedicated pop program, it’s a cop-out to turn up at any summer ‘Gwyl’ [Festival] to film anything there already and claim there’s plenty of music on the channel. Magazine shows seem to dominate. As for Radio, Mon FM creates more of a buzz in Anglesey than anything Radio Cymru have done for years. They do it with a passion, have a rock show, soul show etc., and people trust them. You have to die to get a paragraph in Golwg. Strangely Barn is not on the pile of mags in Gwalchmai Surgery ?.

The danger in starting anything is you know they are gonna be let down, there’s nothing there really to give great life experience memories, a few quid and a blast like A5 got before. Gwalchmai is the place I live, I am invisible to most day to day life, I switch off, chill and keep to myself. I have enough mayhem in my life with the gallery in Bangor, Oriel Parhad. There are some characters loosely based on the village in my wonky Facebook tale ‘’Llanforgotten’’ Gwalchmai, like a lot of my outage, punches above its weight, just because you live in a small hamlet you’re as good as anyone else.

A present day A5 would sit well with Radio Rhydd, and others with stalwarts like LL-LL seemingly oblivious to time and space they would enhance the Welsh Underground dance scene. ‘The band’ would probably be short lived, go tits up and end in mass chaos but whatever was created might stand the test of time as a lot of A5 things from the past have.

Owain Meredith, a top Welsh writer, once immortalized the ‘band’ in the fanzine ‘Sothach’ (he being an ardent fan) with the parting shot ‘’A5 aren’t dead, the girls from Gwalchmai are just sleeping, when Wales needs them they will awake again from their slumber (party?)’’ This was with more than a nod to the legend of Owain Glyndwr.

I’m not convinced they should be poked just yet, the professional media platform is unfortunately not there for the outright effort and ‘strach’ of pulling it off, living like a hermit for a year doing an album that gets played once on Adam Walton’s show and for now at least, my twin Technics SL 1210 Mk II Quartz decks stay dozing too, albeit in pristine blue & silver flight cases ? awww