Technicians of spaceship Hawkwind, this is your Captain speaking… Your Captain is dead… Please do not adjust your sets… Do not panic… DO NOT PANIC…!

The only panic was missing out on seeing the lords of space and time once more sweep aside Offa’s Dyke and descend upon our darkland. Hawkwind are in town and ‘the heads’ (albeit, ‘old heads’) made the pilgrimage from their lairs and their castles to The Tivoli in Buckley. ‘A fucking great venue,’ as someone put it this morning when I told him where I’d been last night.
He was right, The Tiv is a fucking great venue and it’s warming to see it is putting ‘name’ bands back on the boards after all these years. At present they’re in reminisce mode with lots of the ‘old’ bands back on the road, like Cockney Rejects, Angelic Upstarts, The Farm, Wedding Present, Half Man Half Biscuit gracing the stage in the name of rock and roll. There’s sadly a few tribute acts doing the rounds too (wankers), so if they balance it out with some up and coming acts that’d do nicely… Remember, The Tiv was a place where Oasis, Manics, Super Furries, Spiritualized, Catatonia and many more have peddled their filth on their way up to the giddy heights of free cocaine and tabloid smear campaigns.

It was a gathering of the older Crud siblings, myself, sisters Jane and Emma, SteveF and MWJ. We made the sun-kissed journey toward the border, as did Roy Highton’s Old Colwyn Boot Boys and Ell’s Wrexham Contingent.
Hawkwind are an institution and my relationship crawls back to 1983 when I hitched a lift from Denbigh to Rhuddlan and this guy in the car had the brand new Choose Your Masques blasting out; the track Arrival In Utopia to be precise, which culminated in the tripped freaked out ‘If you wanna get into it, you gotta get out of it.’ I was instantly into it and instantly out of it.
Paul Bod had started hanging out with us and he introduced earlier Hawkwind into our otherwise punk record collections and my sisters and myself embarked on a journey that was highlighted when my band [Sons of Selina] supported the mighty Hawks in 1999, it was a huge tick on the ‘Things To Do Before I Die List’.
So here we are, 29 years on from being at school where I studied and I got my GCSEs to being stood in The Tiv. It’s the first time I’ve stood up watching Hawkwind, as I’m usually horizontal or actually levitating! The institution states that Hawkwind shall continue whatever happens to the members; a bit like a football club – you support your team, but as time moves on, the players change, but they still play football (sometimes!). 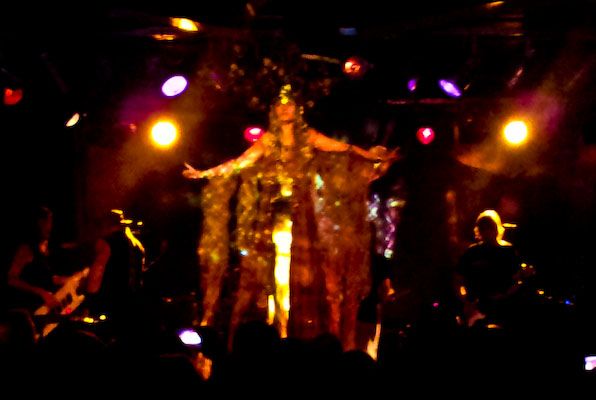 It’s my belief that Hawkwind will carry on long after the current members have blasted off from this mortal coil, into a space that is dark and endless, and the capacity crowd of this 900 strong venue is probably the number of people who have passed thought Hawkwind’s ranks over the last 40 years! And while we’re talking numbers, the combined ticket price that we paid came to more than what Hawkwind paid Sons of Selina to support them! I’d’ve actually paid them to play anyway..!!

The show has morphed and grown along this tour (half way through now), it has always been about visuals and the light show has always been spectacular. The days of Ron Tree’s hardcore assault on the senses have long gone and we’re more into a master jam-out with fantastic results. The alien girls added effect and cause with an improvised show and costume changes from mantra transience to Star Wars fantasies. 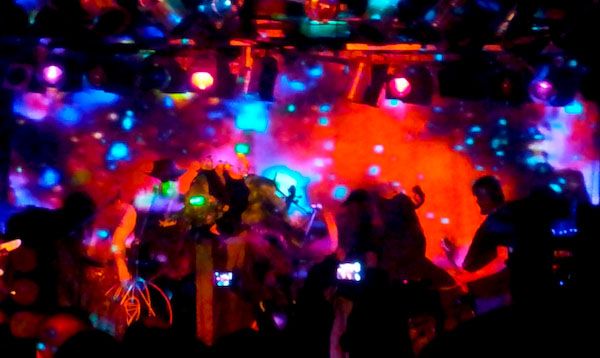 Three minute pop songs don’t exist here (no Urban Guerilla), nothing is less than seven minutes and the truly wonderful, uplifting Hassan i Sahba transcended into a hypnotising techno middle eight (minutes) before heading back into the final burst – amazing. Psychedelic Warlords and the longest ever version of Damnation Alley pitted this 2 hour set, with each of the crowd on their own little journey. Funnily enough the band didn’t disappear in smoke – not a smoke machine in sight (must have had the night off).

There’s a new album to plug (their 47th I do believe!), called Onward and we were treated to a coupla tracks from it, and you’ll know the formula, there’ll be some serious riffage going on, lots of theremin moog, frantic bass, muffled drums and some ambience to make it a complete experience… Just like tonight, particularly when they chucked in Silver Machine for an encore, thus ensuring the teenagers of the early seventies left smiling. They did… We all did…