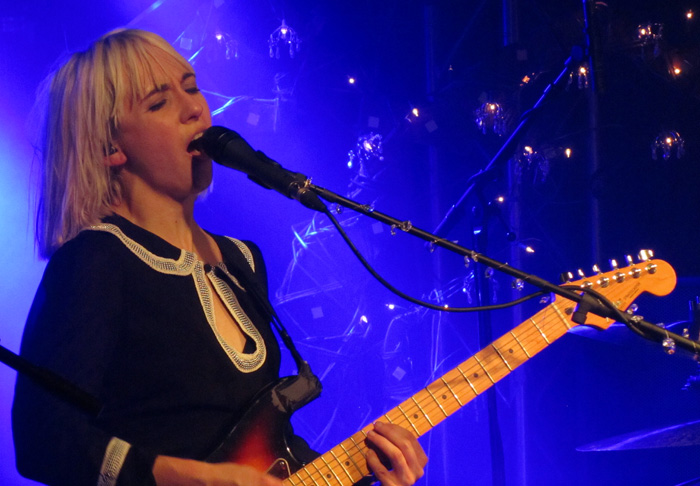 There’s a lot to be said for touring extensively in support of your records, but it must also be a source of great frustration for bands who’d like nothing more than to move on to the next phase of their careers. This is particularly true for new bands with limited flexibility as to what they can actually play, and in recent months The Joy Formidable have provided a classic example of such issues. In January, the Welsh trio released their long awaited LP The Big Roar, which remains among the strongest debuts released all year, while continuing to thrill live despite the fact that they’d essentially been touring with little respite for two years. I myself witnessed their live show both prior to and in the immediate aftermath of the album’s release, and each time they were mightily impressive, but tonight’s gig at Newcastle’s Riverside unfortunately fell way short by comparison. In fact, you could even make a case that they were overshadowed at their own gig, with the excellent And So I Watch You From Afar arguably grabbing the spotlight with their support slot.

The night hardly got off to the best start with an electrical issue pushing the gig back by an hour, and things barely improved when opening act Creatures Of Love took to the stage. Their ambitious soundscapes should be applauded, but the trio (especially frontwoman Bonita Mckinney) went out of their way in their attempts to come across as mysterious and edgy, something that was totally lost on the crowd who by in large seemed unimpressed. In this instance, the delay to proceedings proved a blessing in disguise as it limited the band to a brief three song set, and also hastened the arrival of ASIWYFA, whose own following made up a significant proportion of those in attendance. Those fans weren’t to be disappointed, with the Irish instrumentalists delivering a fabulous display of intense riffing and mind-boggling technicality which seemed to win over even the unfamiliar fraction of the crowd. As with Creatures Of Love, their set had to be cut short, but a half hour appearance was more than enough time for this energetic four-piece to leave their mark.

By contrast, The Joy Formidable took considerably longer find their feet, and arrived in uncharacteristically sluggish fashion. Stadium-sized opener ‘A Heavy Abacus’ is fantastic on record, but loses a lot of it’s scale in smaller venues such as this, and hardly represents an ideal opener being so mid-paced. Things didn’t improve much with ‘The Magnifying Glass’ or ‘Austere,’ with the latter seeing the band trying desperately to impose a level of crowd participation during a song which truthfully never really lends itself to it. It was only with the majestic synth intro of ‘The Greatest Light Is The Greatest Shade’ when they seemed to settle into their stride, and they managed to maintain that momentum with an exhilarating run through fan favourite ‘Cradle.’ Less impressive were the pair of new songs they played from new EP The Big More, and although the band deserve credit for trying to keep their setlist fresh that duo represented a drab bore as opposed to a roar.

In fairness, you couldn’t fault their application, but onstage energy simply isn’t enough when you’ve essentially been rattling through the same setlist for the best part of two years. What this trio needs is a couple of months off in which they can record new material that’s up to standards, recharge their batteries and allow anticipation for their return the chance to build. They’re a fine band, but this performance was typical of one feeling the fatigue of constant touring, and while they were by no means bad, their imminent break could not have come at a better time.