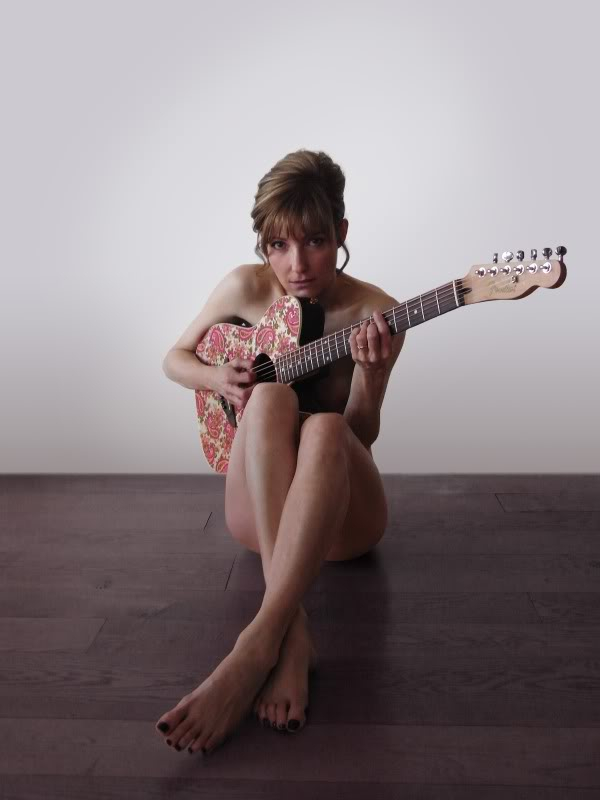 Viv Albertine is not one to mince her words, and when Efa pounced on stage after the opening song to whisper in Viv’s ear, that was the slam down Efa received. It transpires that Viv was asked if she was going through a mid-life crisis after singing Never Come.

Whether the act was one of juvenile naivety, frivolity or a reaction to the previous spat about punk rock at Bangor Museum a couple of hours earlier, Efa will explain later. Whichever reason it is, I’m standing firmly on both sides of the fence on this one. Next to Efa for having done it and next to Viv for the reaction. Typical girls eh!

At the Museum a couple of hours earlier, where the Punk Forever Exhibition is still running, Viv kindly took a Q&A session about the early days of The Slits etc. and got into a heated discussion with Exhibitionist Gerrion over the reasons behind punk rock… Heated enough to become a near slanging match. This deterred me from venturing too close to the stage with camera in hand, just in case I too was shot down in flames.

I wonder if thirty plus years ago Viv would’ve envisaged playing a stripped down acoustic set in Bangor to a sat down audience in a restaurant who were politely munching away at their nibbles and houmous? Top marks and maximum points to Rhys Mwyn and his team for making this event possible. Absolute ZERO points to Cafe Blue for kicking out Seb and Meryl’s kids for talking!!! How they didn’t kick off is beyond me, but I guess the best form of action is to blacklist Cafe Blue from now on. The kids were talking during Patrick Jones‘ set; he had well lost the audience after his second poem, and was nothing to do with talking children. Patrick (the brother of Manics‘ bassist Nicky Wire), touched upon all-religion and how shit it is and anal penetration (as you do), but one or two intensely delivered poems too many led the collective minds to wander, only to be brought back by a couple of songs at the end. Maybe he should do two poems and the rest in songular form…. 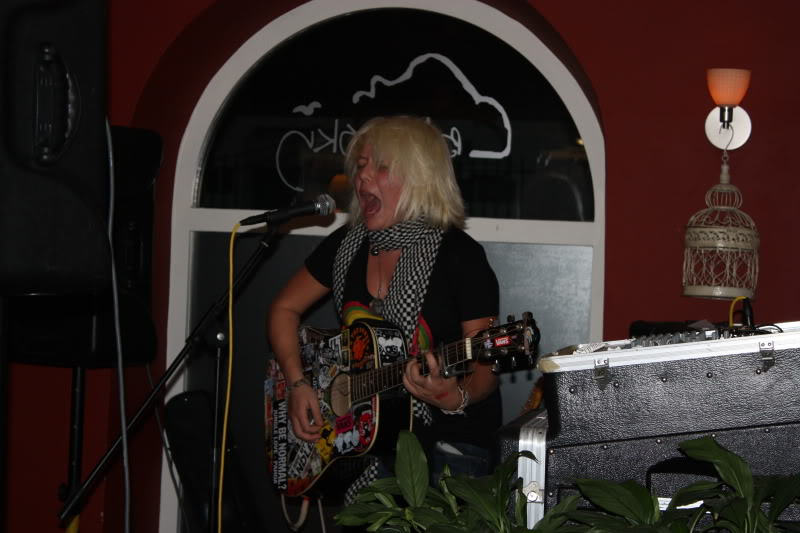 On just before him was Efa (pic above); no longer in Stilletoes, at 19 she has rattled the chords and shook the boards, released the one album and split the band just as Ankst Records were rubbing their greasy mits. Now that is punk rock. So for now, until she announces her next move, Efa will bide her time busking, travelling and winding up punk heroines.

Which, of course brings us to Viv Albertine. She had earlier said to Tim Griff that this really wasn’t the kind of place she’d hang out, and after introducing her trusted red boots, that she first donned during her Slits days, she was quick to announce that there would be no Slits material. ‘We need to move on.’ Fair comment; the argument earlier on was that we also needed to know where we came from, and good points were made on both sides. Although I am siding with Viv on this one; it is important to know where we came from, but I have mates who listen to nothing but ‘the old punk stuff’ – there’s only so many times you can play a Menace or a Vice Squad or a Slits single, you have to move on – yes, remember the past, but embrace the present and the future. Fuck me! I sound like a preacher – thank you Jesus..!!!

Listening and watching Viv Albertine’s set I thought, ‘Good grief, this girl’s got issues!’ But she does make some valid points, she doesn’t believe in love, thinks couples are creepy and sings about apples (kind of) – and all with a voice sweeter than honey. A listen to her ‘full band’ versions of the songs reveal well produced atmospheric and sometimes haunting tunes that you’ll find on her forthcoming ‘Flesh’ EP (out on St David’s Day). Here in Bangor it was actually in the raw flesh that we got to hear these tunes, with a commanding performance from the mistress. 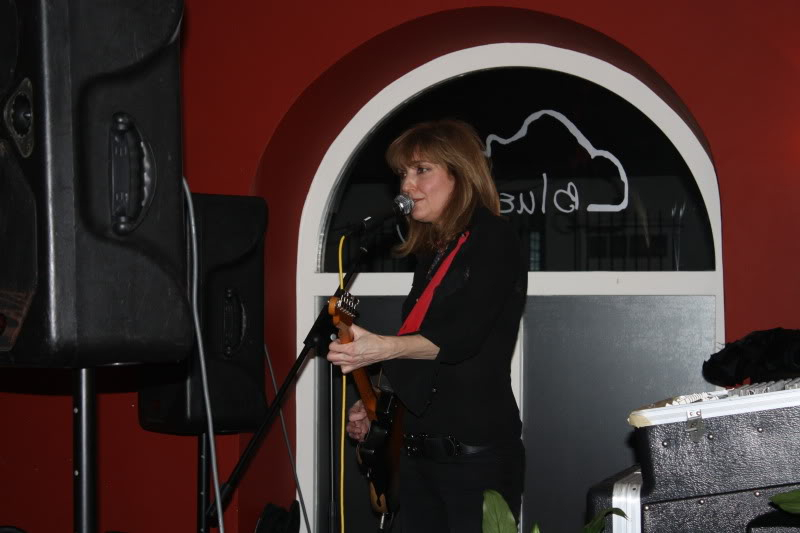 Talking about ‘the incident,’ Efa said, ‘Ha ha, she called The Clash naff and thought she was better than Joe Strummer because she liked ‘world’ music 15 years before him. I don’t think it’s a competition about who got there first, it’s what you do with it once you get there, innit? Geirion the guy who owns the exhibitions got angry at what they were saying that punk rock was not the start… See more of something, it was the end of something, the end of rock music.
‘In her talk she was saying how she hadn’t touched a guitar for 25 years and didn’t want to die having being just a housewife for the rest of her life so she picked up her guitar, I actually think that’s really cool, that takes a lot of guts yeah! Then in her set before playing one song, she said no one is sponataneous anymore, if you love someone you should tell them, if you hate someone you should tell them, so I was like, yo there mofo milf, I know a lot of my generation is brain dead and boring but we all ain’t alright? So I went up to her and whispered to her that I thought she was having a midlife crisis, which was very very clear, through all her songs hating men, hating marriage, hating couples, she is having a bit of a freakout like, fair play to picking up a guitar instead of splashing out on a convertible, it is a better choice, but she didn’t like it when I was honest with her ha-ha. One should embrace the midlife crisis stage of life and not deny it but make the most of having an excuse to do silly things again, it’s like ‘I’m young’ being an excuse yeah!
‘Anyways, I love The Clash and I love the Slits, and it took guts for her to say The Clash were naff in front of a room full of punk lovers, you know that’s pretty cool. In my defence, Kill Your Idols…. and in the words of Stiff Little Fingers ‘Don’t Let Your heroes get your kicks for you’…. why should she have all the fun up there dissing the youth of today ha ha.’