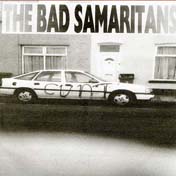 You know sometimes a promo package lands on the doormat and it’s all singing and dancing and must have cost a pretty penny, only when you put the disc in the player you end up shaking your head at how the singularly most important part of the deal, the actual bloody music, is a crock of shit?
Some bands get it all so wrong and instead of glossy photo shoots and promo packs they should have stayed indoors and written some decent music. Well, let me introduce you to The Bad Samaritans whose promo came in a photocopied sleeve with a still photo on the cover of a car spray painted with the lovely word ‘cunt’ on the side. Even before I put this bad boy in the player and looked at the track list I knew this was the real deal and there would be no preening and posing going on with The Bad Samaritans. In fact, I’m surprised the promo for this wasn’t a house brick thrown through the front window with the cd and a note saying “Play this you fucker!”

‘Dicks With Dogs’ is under two minutes of raw power cut from the same diamonds as the best Dead Kennedys, Black Flag, Bad Brains but these boys hail from the punk rock town of Newport (could they come from anywhere else really?). There is no glossing over the subject matter here as Beddis (vocals) says exactly what’s on his mind; there is no clever word play going on here, this is right between the eyes, from the heart punk and, for me, this is bang on the money.

Now ‘Dicks With Dogs’ won’t get on the radio – we all know that – but it should. We all know it won’t because the kids couldn’t handle something as real as this but without doubt it is the best ever song title bar none and that, my friends, is a fact! Oh, except for the Stones recording ‘Cocksucker Blues’. With lyrics that that have no hidden meaning or double entendres, it’s in your face and to the point, ‘Dicks With Dogs’ – we’ve all seen ’em and thought exactly what the Bad Samaritans are saying.

A dozen tracks culled from previously released outings put together with some dub versions that come with a little help from fellow ‘Port heavyweights Skindred, this collection is a most welcome breath of fresh air as it snarls and spits with the true spirit of punk rock and not the cartoon version magazines would have us believe is the real deal…because the smart people know that Bad Samaritans is the real deal. ‘Cars’, ‘Gold Tops’, ‘Grovel’ spill forth from the player like musical nectar from the Gods of no bullshit, no nonsense punk rock. ‘Stab Vest’ runs ‘Dicks With Dogs’ for outstanding track here with a hook that reminds me of ‘Janie Jones’ by The Clash – not that it sounds like it really but it’s in there; listen to it, you’ll catch my drift.

I’m exhausted by the time I get to the end of this disc but not too exhausted to find that ‘I Love The Port’ has been stuffed in my brain and I can’t stop singing it! The bastards. Catchy as fuck! The remix version with guest vocal from Skindred just crushes. This is top notch stuff indeed. I know exactly what they mean with the lyrics for said song – ‘The Port’ belongs to Bad Samaritans and if the knobbers in the town hall know what’s good for them they will give Rev, Beddis, Glover and Jim the freedom of the City. Then they could drive their flock down the High Street like the pied pipers whilst declaring their love for the real Newport. If all bands had this honesty and passion punk rock would be in rude rude health. Class!