Ankst featured in the Guardian 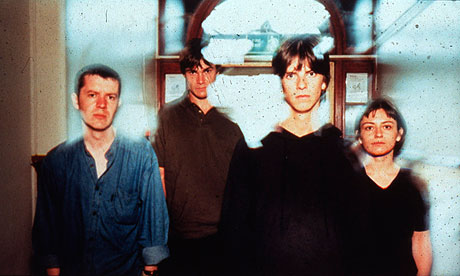 Singing in your native tongue can often be a protest in itself. But in 1980s Wales, as English-owned holiday cottages were razed and English signposts defaced, the prevailing soundtrack of harps, choirs and traditional folk songs just wasn’t enough for a new generation of militants.
Hence the emergence of Ankst, which fostered indie, dub, psychedelia, hip-hop, house and many other subgenres within Y Sin Tanddaearol (the alternative scene). Founded at Aberystwyth University in 1988, the label faced indifference and often hostility from the Welsh establishment for deviating from the conservative fare found at eisteddfodau (national festivals) broadcast by S4C (the Welsh-language channel). In fact, the broadcaster sent a stern letter to Ankst founder Emyr Glyn Williams after failing to see the funny side of a compilation titled S4C Makes Me Want to Smoke Crack.

But the label did have one supporter – John Peel tirelessly championed its artists over the course of the next decade. “Peel was crucial in allowing Ankst to disregard critics within Wales who opposed our musical and his support allowed us to believe in our desire to take music further than just the next protest meeting,” Williams explains.

“As far as we could see, this new experimental scene was the only creative force in Welsh-language culture. Within the general ‘closed shop’ nature of that culture, music was the only part of it that was actually open to us. These new bands seemed to be looking out of Wales and didn’t sound like the Welsh music of the past.”

Ankst started with a low-key cassette release by satirical singer-songwriter (and fellow student) Neil Rosser, who drove the length and breadth of the country, depositing five copies in each of the 12 Welsh-language record shops. The label stuck to its policy of signing no two acts that sounded the same and soon attracted an array of individualists, chiefly Datblygu (Development), seen by many as the Welsh Fall, and Llwybr Llaethog (Milky Way), who made Welsh-language hip-hop, acid house and dub reggae from a council flat in Peckham, south London (they have since relocated to Cardiff).

Label co-founder Alun Llwyd, who at 19 became the leader of the direct-action Cymdeithas yr Iaith Gymraeg (Welsh Language Society), spent six months in prison for trashing a Conservative Party office. Yet when Ankst decided to release music in both English and Welsh a couple of years later, they found themselves at war with nationalists. “The new generation of bilingual musicians were attacked within Wales as being traitors in some way,” says Williams.

But in embracing the English language, Ankst prepared the ground for one of the remarkable success stories of the 1990s: the “Cool Cymru” scene (a term disregarded in Wales in much the same way as trip-hop is in Bristol). Although the phenomenon was chiefly represented by mainstream acts such as Manic Street Preachers and Stereophonics, bands including Catatonia, Super Furry Animals and Gorky’s Zygotic Mynci put Welsh music on the map. These three groups started out on Ankst before heading to bigger labels, and it was the latter who marked a turning-point for Welsh pop in terms of acceptance outside Wales.

“Gorky’s operated in isolation more than any band I’ve ever known,” said Williams. “When we got them they already had three albums recorded. They inspired other people to think harder and raise their game. They’re the most naturally talented group I’ve come across.” Ankst’s modus operandi was managing artists as well as getting as many cheap recordings out as possible. Williams says: “They were just kids, they couldn’t drive, but we had the back up and resources to tout them around and tour. We released three albums and six EPs within a few years.”

In 1997, Ankst split in half, with Alun Llwyd and third partner Gruff Jones managing acts from a Cardiff office, while Williams moved north to the Anglesey village of Pentraeth to run the label as a one-man-band, signing angry hip-hop politicos Tystion, and epic-pop bleepers Zabrinski, among numerous others. From 2000 onwards, Ankst moved into film-making, winning a Bafta and ICA residency for the bilingual Y Lleill (The Others) in 2005. “Unsurprisingly,” Emyr said, “it found little favour with the conservative Welsh establishment, which it fingered for its acceptance and promotion of a narrow and bigoted version of Welsh-language culture.” As ever, Ankst remains committed to kicking against the establishment both home and away, whether it be via vinyl, CDs, DVDs or cinema. “There are no commercial considerations,” Williams stresses.

Ankst playlist:
Radio Crymi Playlist Vol 1 – Ankst 1988-1998 (2003)
This 40-track selection is really the only way to get your mind around the vast and beguiling variety of music handled by the label in its first decade. It includes early tracks by Super Furry Animals, Catatonia and Gorky’s alongside more obscure gems. There’s also a second volume capturing the next decade.

The Hunt for Meaning – M C Mabon (2001)
Of Gruff Meredith’s (aka Tystion co-founder MC Mabon) seven albums released so far, this is the masterpiece. A concept album that fuses more genres previously thought possible, it includes a catchy disco track called Iago Prydderch Rejects Irony and Western Metaphysics and another directed at Jamie Oliver, titled Fuck U If U Think U’re Cool, plus a Chinese orchestra.

Skellington Horse – Klaus Kinski (2010)
Due this summer, the debut album from a musically explosive band inspired by Werner Herzog, Bauhaus and mental instability. “A classic Ankst band,” says Williams. “There’s just something about them, and I don’t mean the ringing of cash registers, I mean something far more important.”