[Found this started but never finished review I was to do of the Sonisphere Festival – I guess the Festival count took it’s creative toll this year..!!] 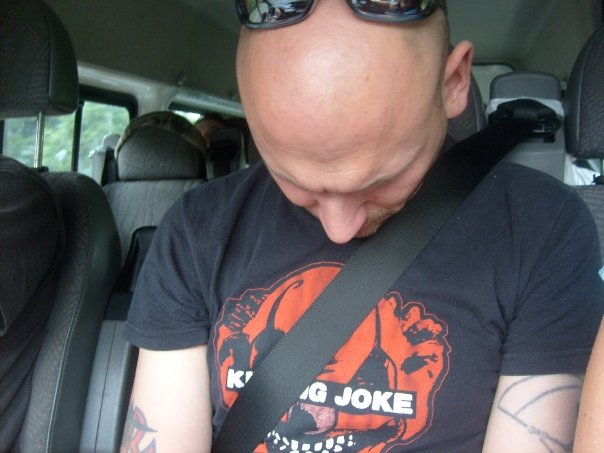 It’s been a long summer and it’s only the first week of August. Sonisphere being the 7th maybe 8th Festival I’ve attended this year, and there’s still a couple more to do. Decided early on that 2009 would be one big festival, and why the hell not eh? What’s wrong with shaving 5 years off your life if that five years was going to be spent shitting your pants in an old people’s home?

Sonisphere wasn’t on my radar, Tim called me up in Prestatyn Football Club of all places and asked if I was up for it. Of course, I unwittingly replied, not really knowing what it was all about. Having sludged through the mud of Wakestock, some bright spark decided we would have the luxury of a hotel for this one, and the Travelodge on Junction 13 of the M1 Southbound was booked for 8 of us. Seemed a good idea at the time ’til we realised Knebworth was a £75 taxi ride away; at least there was safety in numbers!
We delighted in the trappings of downtown Dunstable for the first night, crashing back to the room at stupid o’clock and ensuring a stinking hangover would follow us around until we washed it away with a £3.80 pint of cider.
Let’s get something straght here, I don’t do all that ‘Let’s be fucking hearing you Knebworth’ and ‘Come on motherfuckers, let’s make some noise’ metal bollocks that these kids like, I’m just here for the crack.
Crystal Meth aside it’s the vibe I’ve got into rather than the music (this being my 3rd ‘rock’ festival of the year). There was enough to pique my interest, even if it was a lukewarm greatest hits performance by Killing Joke or a laid back affair by Nine Inch Nails.
The weekend began for myself in my newly adopted home village of Trelawnyd; not really the epicentre of all things rock ‘n’ roll but quaint all the same. In fact, had I not been dragged kicking and screaming across this nation’s motorway network I’d have spent Saturday night across the road at my new neighbours’ house-warming party (I later learned they got through 150 burgers and 8lb of bacon..! Some party!). The Bethesda minibus picked me up, driven by a reluctant Tim who proceeded to cough swine flu over me throughout the 5 hour journey. A familiar whiff of earthly smoken goods reached my senses as the children in the back sparked up to make the journey a little more enjoyable, but I don’t need any of God’s gifts and soon found myself drifting beyond the ether.
With the A55, M56, M6 and M1 safely circumnavigated and the 8 of us carefully smuggled into the ‘family rooms’ at the Travelodge we made Dunstable a priority (for some reason) and sampled their finest Thai cuisine before hitting the town.
‘I think I really have got swine flu’ moaned Tim the next morning as he turned over onto his cold kebab.