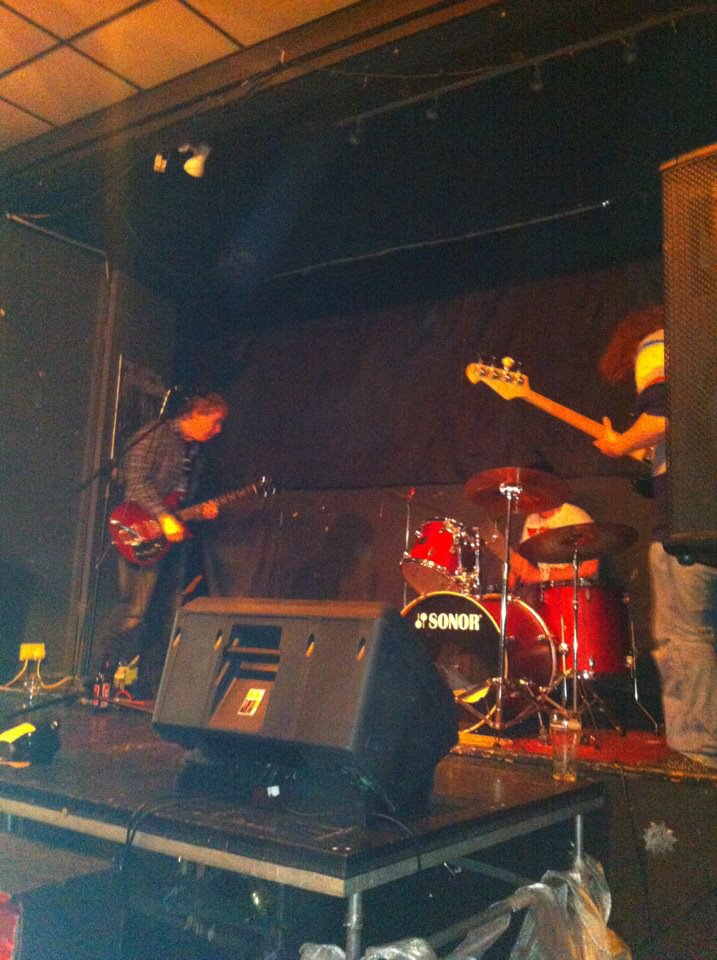 Beep! “Houston we have a problem” Beep!

There’s certainly something not quite right when the North Wales scene’s premiere archivist is asking for someone – anyone – to review gigs for this site only to be met by a roaring silence.

Is it that people just aren’t bothered anymore or are they simply content to be passive consumers?

I can’t answer that but I find it exceedingly strange that a packed out gig that features three incendiary performances fails to inspire anybody to put pen to paper, particularly as one of the best and most enthused reviews to appear on this site in recent years was written for the scribe’s media studies course.

As a result we’re left with the highly unsatisfactory situation of the gig’s promoter reviewing his own show, immediately turning things like sound quality and the promotion itself a no-go area for comment, at least unless it’s from outside response to this review.

So, sticking to the bands themselves, we’re confronted with sets by three bands who have already set themselves apart from a large number of their peers simply by their work rate and application to the task of being a band.

Sona hail from Bangor but it wouldn’t surprise me if I discovered that they’ve played Rhyl as often as they’ve played their hometown over the years and with the addition last year of Kyle Lee on bass they’ve almost become a Rhyl band by proxy.

They’ve been gigging intermittently for five years or so , their progress limited by frontman Jamie’s educational commitments, but in the last 12 months or so have started to gain a building momentum that will reach fruition shortly with the release of their debut album.

It’s a release I’m looking forward to because the long incubation period has given the songs plenty of time to be honed into shape on the road and they are now stuck firmly in your head the morning after the gig.

Sona’s MySpace URL is sonagrunge and you can certainly hear the Nirvana influences in the “quiet, quiet, LOUD, LOUD, quiet, quiet, LOUD-AS-FUCK-TO-FINISH” structure of the songs but there’s an optimism radiating from the stage that is in sharp contrast to Cobain’s dolefulness.

Given that this is primarily a 4 Sticks crowd, Sona acquit themselves superbly, their experience in having to win over new audiences shining through in the banter and in the songs themselves.

The 4 Sticks themselves fill the middle slot and from the opening chords you realise that this is going to be one of those special sets where everything just clicks into gear from the off.

The audience are predictably going ape and that certainly adds to the atmosphere but it wouldn’t have made an iota of difference musically if they’d been playing to the barstaff only because it was one of those nights where everything just gelled.

Yes, the songs are great – visit their MySpace if you need evidence of that – but it is the performance that has set the 4 Sticks above their peers so quickly and dramatically.

They look like they’ve been spawned from the loins of Johnny Thunders, a cool rock n roll swagger swathed in black, and I would suggest a trawl through the history of pop culture should anybody be in any doubt as to the importance of looking the part.

Elvis, The Beatles, The Stones, The Stooges, The Pistols, The Stone Roses, Oasis – all of them LOOKED as cool as fuck so that you knew you loved them before you’d even heard them and while I’m not suggesting at this moment in time that the 4 Sticks are ready to join that elite band, they have nonetheless grasped the importance of visuals.

Having said that, they’ve got the songs, the look, the work ethic and the desire to really make things happen for themselves so perhaps it would take something like a ban on the wearing of black clothing onstage to seriously hinder their progress!

They’ve earned a bi-monthly residency at the Dudley on the strength of this show and they will have an active role in putting the line ups together, just reward both for their own capabilities and because they introduced us to ……………

……………..The Laurels, who watched the 4 Sticks from the back of the room with the sense of pride of the older siblings that they’ve become to the young pups.

The Laurels are here because the 4 Sticks asked them to be and they asked them to be here because they’d played together in The Laurels own Cheshire home area – call it networking, gig-sharing or whatever but it works, it gives bands a chance to play to a decent sized crowd outside their hometown and it effectively gives a much deserved kick in the bollocks to the pay-to-play “promoters” who have turned most big city circuits into no-go areas for any band who doesn’t want to be ripped off.

The Laurels don’t have the wide-eyed nervousness usually associated with bands playing out of town – why?

The singer has the on-stage cockiness of an Ian Brown/ Liam Gallagher hybrid ( I half expected to hear calls of “Remo” at this point) , slurping insolently from a Newcastle Brown bottle between numbers.

Musically they’re a good deal meatier than most North-West bands – the lead guitarist’s Led Zep T-shirt is a giveaway there – but they contain any tendancies he may have to fret-wank, allowing him just enough time and space to dazzle with the technical expertise he so obviously possesses.

The set ends in a mass/mess of feedback – let’s be honest, that’s the way all great rock n roll performances should end – and with a shout of “We’ll be back”.

They will be and you can’t help but know that the crowd will be there as well.

STILLETOES @ The Skerries, Bangor Safety in Numbers in Denbigh