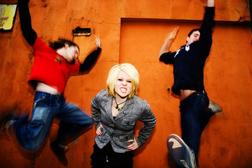 Captivating was our conclusion as me and Sync wearily weaved our way through the A55 traffic back home this morning. For that is what Efa does to her audience, captivates you, demanding your attention and you simply can’t turn away.

Lack of a workable microphone meant a delayed kick off, and when someone turned up with Madonna S-Club 7 type head microphone it was like a red rag to a bull. From what I’ve read, Stilleto performances are a sight to behold, but being bereft of a microphone stand allowed front girl Efa to thrash around the stage with the possessed demons on full show.

It was loud, it was fast, it was uncompromising, it was trashy, it was punk rock and most of all it was highly enter fucking taining!

The Stilletoes made one hell of an entrance onto the scene, such a short time ago, full of punk rock youthfulness and barely out of school, and yet they are more than capable of holding their own, if not surpassing many a band on the scene, and it’s safe to say it’s only a matter of time before they do.