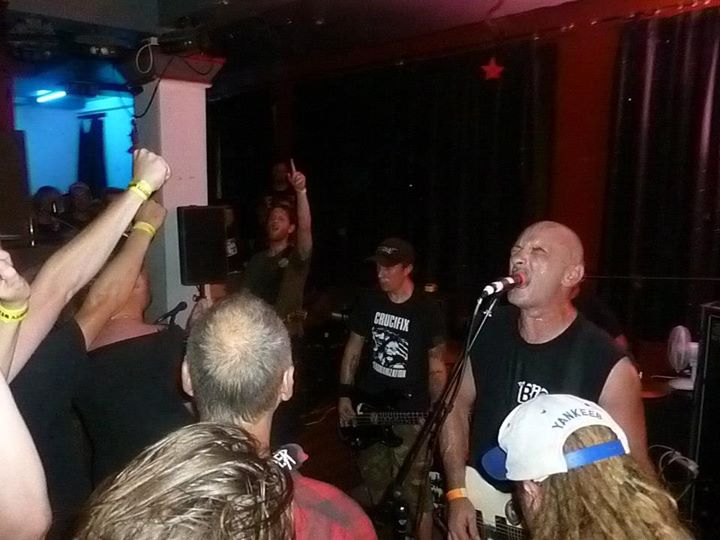 I brought a carrier bag full of bananas, apples an pears to share with Matt, Gary an Gaz for the road trip an I think this is probably the best way of describing my state of mind as it deteriorated over the course of 4 days… At this point looking a bit tired but still juicy an full of flavour (just like fruit).

Managed to get about an hour’s sleep on the way down to Southampton and wasn’t really feeling THAT tired at this point. Was lookin forward to meetin’ up with Alice and Sarah, good friends of ours from the Wasted Festival in Morecambe, who’ve become regulars at the Dirty Weekend and Rebellion Festival in Blackpool.
It was Sarah’s birthday aswell, which is why this gig was organised, so we knew it would be a merry one to say the least.
We arrived in Southampton at about 5pm, dropped off the gear at the Hobbit before headin’ over to Sarah’s house, which we found easily enough thanks to ‘Julie’ the sat nav.
Felt fuckin ace to arrive after such a long drive, sit down with a refreshing beer an smoke, mmmmm… They kindly made us some tasty veggie spag bol an I took the role of ‘the dog’ getting dished all the leftovers that Matt ‘n’ Gary couldn’t finish (skinny fuckers!).
After listenin’ to some girl that no one (not even the people that lived there) knew, telling some very interesting and far fetched stories about breaking a policeman’s nose and getting away with it cos her dad knows him; I think she was on speed… we moved on back to the Hobbit to catch the first band…

THE SMOKEY BASTARDS, a sort of Irish folk band from Reading consisting of about 6 members, including violin, accordion etc. their drummer couldn’t make it tonight and there were moments when they struggled to stay in time because of it, but most of it sounded ace, really colourful an interesting music, played really well.
They had songs about the local alchoholics sitting on roundabouts with no shoes etc. I was thinking I’ll have to approach these when they finish to ask if they have any demos, but forgot. Was also thinking Merry Chris would love these as he loves his Irish folk music, and that it was a shame he couldn’t make it since he drove us down here last time.

Next up were IN HER RUIN. Musically, this band were quite talented but didn’t keep me interested, yes I suppose its subjective cos I’m not into this type of music but I do think it was generally quite boring. It was like trendy sounding screamo type stuff, I’m not very familiar with this type of music to make any informed or intelligent observations but I know I couldn’t make out any kind of lyrical content, an although you can argue that’s the same with punk, I think its fair to say this was just growls an squeals from start to finish.
If there were any deep an meaningful points being made, there was no attempt to express them inbetween the songs, so an outsider like me who’d never heard them before leaves none the wiser.
Visually (it shouldn’t matter, but it seemed like it did to this band) a bit dodgy in my opinion, all this John Travolta emo dancing, hair straighteners and cheesy smiles.. Ya know when they’re all throwin’ their moves an lookin’ round to check everyone saw them do it. Right on, dude. Too much style, not enough passion.
To be fair, they looked like they were having fun and who am I to knock that? I just wonder whether they’ll still be into it when it goes out of fashion. Their mates formed a pyramid down the front and it was ace to see the bassist from Haywire (Southampton punk band) climb up on top with his fist in the air, causing the whole thing to come crashin’ down gloriously!

Which brings us to the next band, HAYWIRE… more my cuppa tea, hardcore punk with an anarcho edge to it. There were a few moments when they slipped out of time, particularly when their songs went into blast beats, but I think its cos the snare is a lot quieter when it’s that fast and it didn’t cut through. If the snare was mic’d up I don’t think they’d have suffered this problem, as they sounded tight as fuck in other parts.
They had a song about the G20, an said something about how Ian Tomlinson was literally beaten to death, and didnt die from a heart attack. It wouldn’t surprise me anymore. Strange that the city of London CCTV was down for the two days of that protest though, and NATO troops were on stand by, they were obviously anticipating the excuse to attack protests en masse and didn’t want the camera’s on.
Anyway, really enjoyed Haywire’s set, and seemed like a decent bunch in the brief conversations we had with them after the gig. They’re up for gig swaps, watch this space…

Next band, MARTHA BECK. see what I wrote about In Her Ruin… but with different people and seem more confident and experienced on stage.

Then we [GLOBAL PARASITE] played and we were of course the best band ever (that’s sarcasm), maybe someone else that was there can write something about us, if one of those emo bands wanna write something that could be interesting! After playing the last song far too quickly, I felt very very fucked, and it wasn’t very long before I was pukin’ up all over the bog floor. Something which is getting far too routine nowadays, and I don’t know why.

After the gig we went back to Sarah’s for the house party, she lives in a really residential area. PA speaker’s pumpin out music really fuckin’ loud all night til about 7am apparently or something daft like that. No complaints while we were there at least, which was quite impressive.
I opted for some cheap 7.5% ‘Amber Jack’ cider and made a mess of myself, talking all kinds of deep ramblings with Gaz Rampton and some bloke whose name I can’t remember.
I think the bloodline of Mary Magdalene / da Vinci Code was the ‘hot topic’ for a few hours, but I can’t remember what was said about it by anyone.
Eventually found a quiet floor space at about 6am an got a bit of a ‘power nap’ til about half 11. Then we all got movin’ again to pick up the gear from the Hobbit and get a move on to the next gig in Birmingham. The bag of fruit was by now looking pretty uninviting, a banana had split in the bag and the cider gave my head a similarly ‘rotton fruit’ type feeling. You get the idea anyway… so off we go to Birmingham.