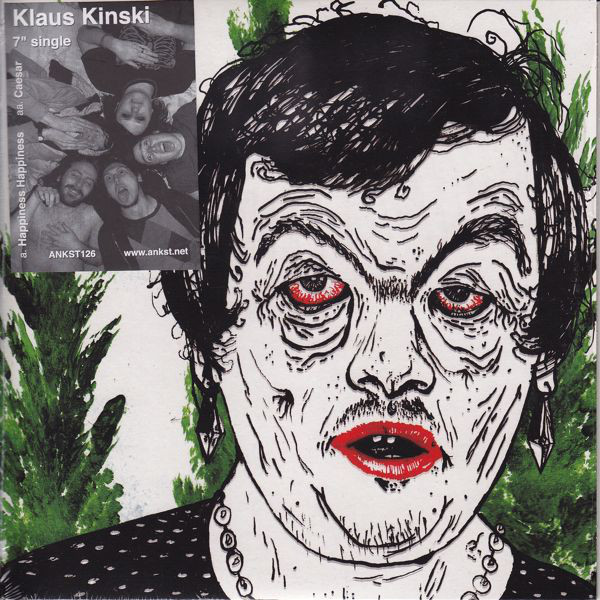 Klaus Kinski formed in the graveyard of a freshly burnt church in Llanfairfechan by old friends Jake McKenna and Edwin (Irma Vep) Stevens in 2005, originally formed to channel their love of Bauhaus, Satanism and Herzog films onto a four track tape recorder in Edwin’s room, the band has now become a five piece guilt ridden no-wave post-punk flamingo with massive delusions of grandeur.

Singer James Starkey (of James Starkey fame) joined in 2006 for the debut EP ‘BATS!’, with which the band did very little. In 2007 they drunkenly approached Alan Holmes of Ectogram at a gig to record a split CD with them. Reluctantly, Alan agreed and Ed, James and Jake, (being well chuffed at the prospect of sharing a disc with one of their favourite Welsh bands ever) got their collective ‘shit together’. Dylan “Deebo” Hughes joined the band as guitarist / keyboardist. September 2008 saw Klaus Kinski perform their first gig playing actual songs (not just noise) at Clwb Ifor Bach on the BBC introducing stage for sexy radio DJ Adam Walton. Here they performed with now full time member Dominic Tanner on guitar and it was ace. Since then the band have been playing a stupid amount of gigs around the UK and have recorded about 500 albums worth of new material. Their debut long playing record ‘Skelington Horse’ was released in February 2010 by ANKST.

(review below for the single by Adam Walton for BBC)

The singles and albums charts aren’t the barometer of musical tastes that they once were and they are undoubtedly an unreliable foundation upon which to build any kind of argument about shifting paradigms – but that’s not going to stop me. Heck, no.

If the ‘charts’ are to be believed these are the least rock ‘n’ roll times since Billboard Jungle blew like a hurricane through British cinemas in the late 50’s. Things were bad when the Stock Aitken and Waterman *hit factory spat out one flob of cynically exploitative, Fisher Price yack after another in the mid to late 80’s, and when Saturday morning kids’ TV was ruled by an anodyne army of Steps clones in the early 90’s, but these are the hardest times I can remember.

Okay, pop music isn’t moulded for the likes of me, sitting overweight atop my thirty-eight years with an unseemly fascination in the music of the young. To some, Lady Gaga may be thrillingly outre and original; Kings of Leon may be the embodiment of the rock ‘n’ roll spirit, and Paramore may be… may be… I can’t think which chord Paramore are striking amongst the young. They sound, to me, like the last pound of flesh being pecked out of punk’s rotten corpse. A cynical coupling between heinous emo pop and the tokenistic ‘alternative’ performer on American Pop Idol.

Given what the mainstream media would like to foist on us as the sound of today, it’s little wonder that Klaus Kinksi come across like a hail of napalm falling on dead leaves.

Llanfairfechan’s Klaus Kinski are the nightmarish unravelling of rock ‘n’ roll’s suffocating traditions and conservatism. Sure, people have pushed the envelope just as far in the past. The man I stood next to while watching Klaus Kinski rip a sore in last year’s S?n Festival got very aerated about what he perceived to be their “fakeness”, about how he thought the singer’s convulsions on the floor – while wearing a paper bag as a mask – were affectation rather than the ‘real thing’.

In his opinion, they weren’t confrontational enough. If you’d seen the Butthole Surfers, GG Allin or, even, Iggy Pop, this shambling mess of a band were about as dangerous as apple pips. That was his point of view, it wasn’t mine. There’s an element of pantomime to all the bands he mentioned. The disorientating TV monitors showing a sex change operation in reverse as the Buttholes’ noise sawed through the heads of their audience; GG Allin visiting himself and his viscera on his audience; Iggy Pop stripping, smashing, slashing whatever it took to intensify the voodoo in the music and the sense of drama in the audience.

Klaus Kinski – who hadn’t played live enough to develop anything close to ‘an act’ – just stripped themselves bare and gave the best live representation I have ever seen of mental anguish. Because it wasn’t representation. It was so real and so unsettling, some had to seek solace in puppets from the past.

So, why would anyone want to vicariously experience Klaus Kinski’s nightmares?

Because this kind of anguish and despair can make great, enduring art that helps us learn more about the human condition than all the Kasabian, Killers and La Roux albums you could fit inside the sun.

Because those artists brave enough to take a bathysphere down to their own personal depths bring up startling creatures the rest of us could never imagine.

Because it makes for astounding music that has an edge its contemporaries wouldn’t dare even go near.

Connoisseurs of black metal would be able to list more obvious and traceable precedents and influences, maybe. But I’m no connoisseur.

Just a connoisseur of nightmares.