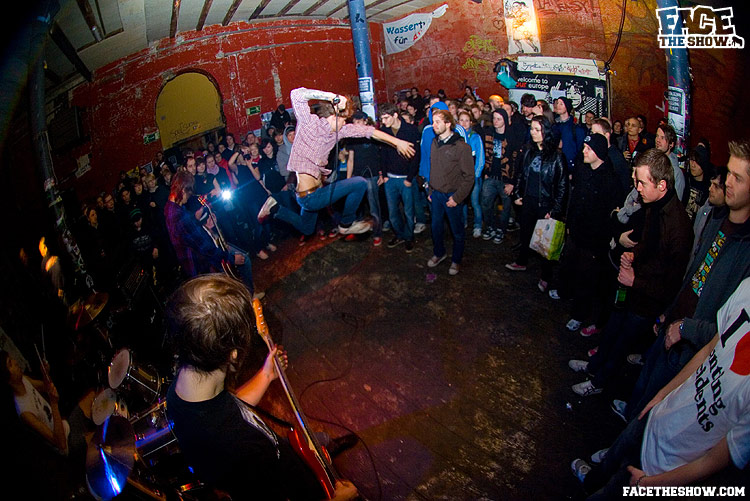 Anchor are excellent! Just thought I’d make that clear straight from the start. The Swedish straight-edgers kicked off this gig and got the crowd moving immediately with their passionate and heart-felt delivery. Their songs cover much the same ground as every other SxEx band, but when its delivered as well as this, it’s fucking crucial.

I Rise were next up and I thought they were pretty poor. The band spent most of the gig facing away from the crowd and the singer came across like a spoilt rich kid pretending to be in a hardcore band. I just couldn’t take to them at all.

I only bought Verse‘s new album “Aggression” a few weeks ago, but it’s been one of my most played CDs since then. Passionate and positive hardcore with enough twists and turns to keep it interesting.

The crowd went fucking mental as soon as they burst into their first song and the energy level didn’t drop during the entire set. They played quite a lot from “Aggression” and they went down a storm.

The singer spent a lot of time talking to the crowd during songs about social injustice and the general financial “Armageddon” that is engulfing the planet. The kids clapped appreciatively after every little “speech”, and it was all quite respectful, until Verse launched into another song and it was as if a bomb had gone off near the stage!

Verse were great, passionate and intelligent lyrics delivered with the energy that only the truly frustrated and angry can muster. Nothing fake about this band.