In December 1988 the first issue of the fanzine Macher was published, compiled by Dave Jones (born 9.6.65), who was soon to take on the ‘zine’s moniker as do all fanzine writers. Macher was the first English language fanzine to cover Welsh language music in an attempt to run alongside Anhrefn in bridging the gap between the two cultures. And to an extent Dave succeeded and ran the ‘zine for twelve issues (which is excellent for a fanzine), receiving reviews on both radio and TV. Being a newspaper journalist Dave was able to utilise the technology at hand to produce a well presented ‘zine, although ironically Neil Crud typed up the first issue!

Drawing on the enthusiasm of both Anhrefn and 4Q, who he publicly cited as his heroes, Dave formed his own band, Pyw Dall in 1988. Although Dave lived and worked in Denbigh, the band was based in his native Holyhead. Dave was the frontman/bassist with Dylan Williams (b.12.12.71) on guitar and Tudur Owen (b.22.5.67) who replaced Steve Jones on drums.
Pyw Dall were originally ‘formed’ in 1987 by Dave and his student mates but none of them could play instruments (in fact none of them had any). Tudur would eventually end being a Welsh TV personality.

Yet despite their initial musical shortcomings, they gained newspaper and magazine coverage on the back of being total frauds. Once described as ‘the Welsh equivalent of Barry Manilow on a heroin charge,’ the band formed ‘for real’ a year later.
They took their name taken from the character Blind Pugh, played by John Cleese in the Monty Python inspired film Yellowbeard.
Dave’s lyrics and wit portrayed a very Kinks-like attitude, looking at everyday things in life eg; the song Y Wilk, is about a racehorse called The Wilk with the translated lyrics of; “don’t back The Wilk, he’ll end up on the floor.” 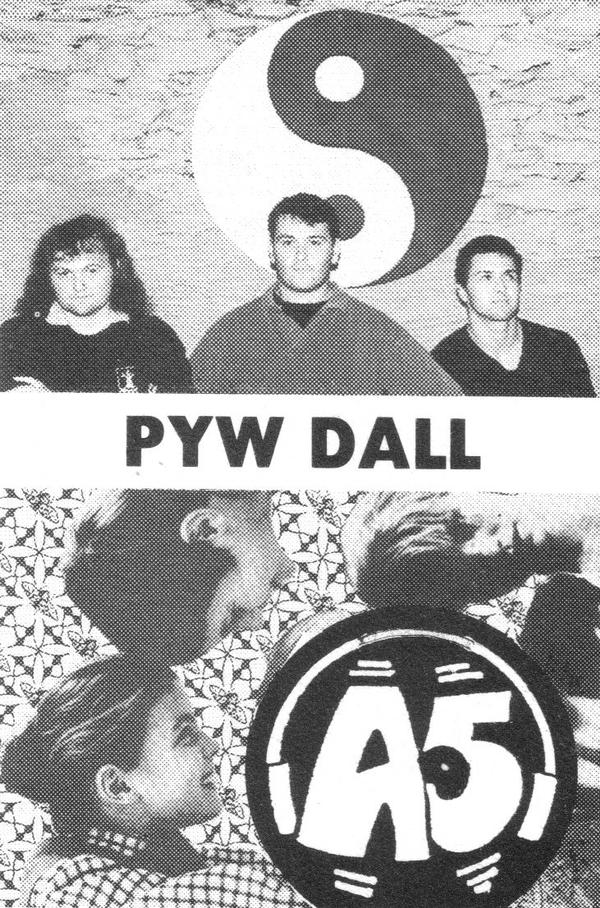 The first demo; Y Ffon Gwyn (The White Stick) was slated in the Welsh magazine Sothach, and the official cassette release of the demo Dim Heddwch (No Peace) was largely ignored by an ignorant Welsh media with only Yr Anhrefn’s Rhys Mwyn pushing the cause. The band did however perform a superb session on BBC Radio Cymru’s Ian Gill Show (the songs Crosville and Premiere Cymru Wales were later banned) and Y Wilk was featured on the compilation CD; Hei Mr DJ.

Maffia Mr Huws drummer Gwyn Jones had played on all the band’s recordings until Tudur Owen was recruited as skins man in March 1991. The band’s first live gig came the following May and Tudur played on the group’s second and final cassette Gwallgo in September, a joint effort with fellow Anglesey act A5.

Pyw Dall played a total of sixteen gigs and were voted Most Promising Band at the 1992 Urdd Eisteddfod in Ruthin. They also recorded two videos for S4C’s Fideo 9 programme, Twll Din Byd (The World’s Arsehole – a ‘tribute’ to Holyhead) was screened in November 1991 and Y Gamblwr (shot at Haydock Racecourse) was shown in October 1992.
Tudur left shortly after for a six month honeymoon in Australia and the band never played together again. An ill-fated return with dance music songs based on slating Coronation Street characters was soon abandoned. Dave and Dylan briefly got back recording in 2007, but nothing as yet has materialised.

On the 2004 release of MC Mabon‘s Kerdd Dant CD (on Slacyr Recs), Dave said; ‘MC Mabon sampled one of our songs (Dim Heddwch) and promised to make us millions, still waiting.’

Before Pyw Dall, Dave was part of short-lived acts such as Windshite, Howlin Wind and Wank Williams, and after the band he became a newspaper editor in Rhyl and dabbled occasionally with recording. One such dabble being April 2000’s release through Mr Big Time Records under the guise of Quill Bones. A new project – The Amazing Expanding Indian – was also planned, but nothing as yet has emerged.

Dave is now a much revered and award winning sports editor with the Daily Post.