Even though I’ve haven’t exactly limited the extent of my gig going recently a rare work trip to the Midlands gave the perfect opportunity to scout out further happenings. Surprisingly enough Stoke offered better options than Birmingham where I was actually heading but as it was on the way, there and back, it suited fine. 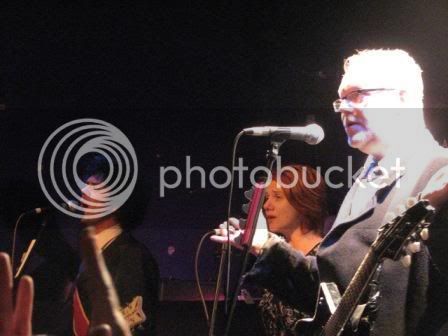 In looking at the listings I only recognised Cardiacs by name, they’ve had plenty of time to impinge upon my consciousness given their 17 year history but as far as I can recall I’ve never heard any of their stuff. However, they were raved about by the good folks at the NoMeansNo forum, and as fans of that band, I trusted their judgement. Plus coming to something entirely fresh is an experience in itself.

Had to find the place first, as I hadn’t been here since seeing King Prawn quite a few years back, but once in the centre of Stoke’s signposted (apparently without irony) “Cultural Quarter” instinct kind of reminded me. Not exactly cheap on the door, maybe it goes up a pound every year, but some 150 or so inside obviously consider it value for money.

On entry discovered support God Damn Whores were already past halfway through their set. Seeing the stage times posted to one side it was evident that a 10:30 curfew meant that everything had to be brought forward around that. Anyway, I still had chance to enjoy some of their sleazy and darkly atmospheric up-tempo rock, a more London-punky version of Danzig maybe, a touch of Gallon Drunk’s swagger in there too. They had a degree of style but it was over and done before I’d got much of a feel for what they were doing.

There’s some effort at the theatrical in the set up for the headliners, the huge tassled backdrop of “The Alphabet Business Concern”, their record label, the symmetry of velvet draped, raised bass drums that I initially presume are just for show, some intriguing random metal percussion devices a la Cop Shoot Cop. A good deal of light hearted and excited banter and humour in the crowd, evidently there’s a lot of travelling fan (-atical) support, over a wide age range as well reflecting their long career. One guy strips of to his t shirt and shorts preparing for action, there’s another guy in a full dinner jacket ensemble. The quirkiness of their music reflected in the their followers? Through playing an annual show in London over recent years they will have perhaps cultivated this cult.

The fans know there stuff as it is like name that tune in one when notes of sampled intro come through and a big cheer goes up. Again, there’s a stylishly artful element to their stage presences, guitar and bass on either side, two lady backing singers with matching dresses perched primly with emotionless faces, on high stools, the drums and main man Tim Smith at the centre of it all. He certainly does have a big presence, added to by him wearing a big black cashmere overcoat for the entire show even if he is playing guitar as well as singing. The banter proceeds backwards and forwards now, with humourous heckling and in-jokes.

The music begins and in the course of the first song or so they demonstrate what I wildly inventive and unique proposition they are. From abstract jazz to pop punk to groovy metal they are seemingly all over the place but actually in complete control and with precise direction. Parts of this rapid structure shifts seem to evidence them as a major influence to Mr Bungle. With practised synchronicity the two demure ladies stand, turn, and beat shit out of the bass drums and metal, which added to the conventional kit gives a gut punching heaviness. They also provide falsetto backing vocals as expected, also with the guitar and bassist, and Tim’s own high pitched/childlike delivery it adds up to almost an folk rock choir feel, like some 60’s anthem, and it’s this uplifting psychedelic feel that is the cornerstone of the experience.

The largely irrelevant banter between songs, about annoying feedback tones, or just about crowd band relations in general, is also delivered in a kind of camp cockerney/ Alan Carr way, though with his look over his glasses at times there is a suggestion that this would also not be a guy to mess with. The kindly teacher meets the psychotic preacher. Some of the songs start with almost industrial rhythm and sample heaviness, there’s some driving grooves pumped along by the bass (looking like a cross between Brian Glover and a million and one pub landlords) and the intense drummer, the other guitarist also provides some wild solos and general sonic abuse.

The faster tempo of some of their more punky pop inspires some seriously chaotic mosh pits, but all participants have incredibly wide grins. There’s a moment where they actually try to calm things down, only to be met with more heckles for trying to impose rules when they are some wilfully unconventional themselves. The ending is an absolute epic, where a repetitive riff is drawn out for ages while the girls hold a note for an impossible length of time, the gradual realisation that they are matching a keyboard note and taking the odd breath, brings another big smile. They give us a couple of songs as an encore before they leave to genuinely warm applause, which I wholeheartedly join in with. Another good discovery, even if I am a little late coming to the party.