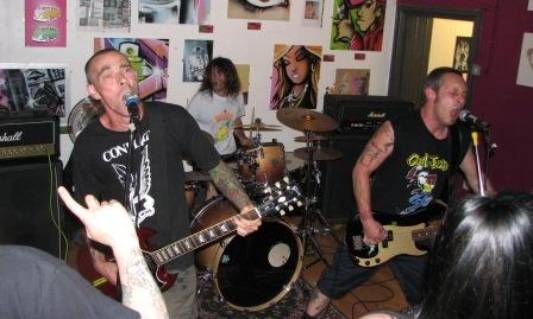 I’m rediscovering the joys of alternative transport. Like my previous bike excursions to West Shore I’ve now found the trains as a good means of reaching the local punk scene, Rhyl last week and now the Bay.  Even better if you don’t have to pay like a certain keyboard playing correspondent from the east, who shall remain nameless in case the fascist railway police are watching  The same incentive of getting responsibly pissed as fuck through not driving also applies.

Used to work in the Bay and watching junkies and chavs fighting on the street during the day kind of coloured my opinion on what a night out here may entail. I hadn’t been to this venue before but despite its small size there was a good atmosphere in and out on the pavement.  Tried out various Czech lagers but me and Ste Sync agreed that our senses must be shot to fuck to not be able to distinguish any differences bar the indecipherable names.  If we were connoisseurs we’d be picking up those delicate fragrances of cheap prostitute, tractor factory and a lingering afterglow of communist oppression.

A first time also to experience Juz and his MC colleague, providing an off-set to the rest of the evenings content.  But then maybe not so much, as there’s always been a significant proportion of hip-hop alongside my punk collections, both getting my respect and interest when they actually deal with hard reality.  He definitely had the flow anyway, although probably through the minimal PA a lot of the clarity was lost and that’s a bit of a problem when the lyric is the thing. Still, you could make out enough when you were close enough in, my favourite being the languid bass grind of “She Got A Hitman”, women, eh?  1000+ words were apparently piled into an earnest debate on all drugs, and the last one had a ripping drum beat tempo that led well into the following bands 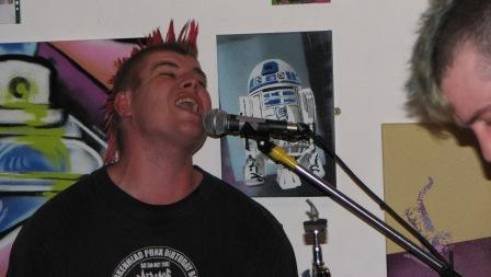 Three times in a fortnight to see Global Parasite now, which must make me about their 143rd best fan.  They’ve done more gigs than that in that time though, pursuing all opportunities to spread the word and no gaining the benefit of folks recognising their quality and opening more doors in an exponential fashion. This was the best of the bunch that I’d seen, the in-yer-face setting, the positive atmosphere, easy going humour amongst their home town friends, and the key being I’d finally caught on to their lyrics to fully appreciate the likes of “Totally Exploited” and “Hatred”.  For a three piece they definitely have a relentless power about them, delivering the material with a fury and passionate about getting something across. 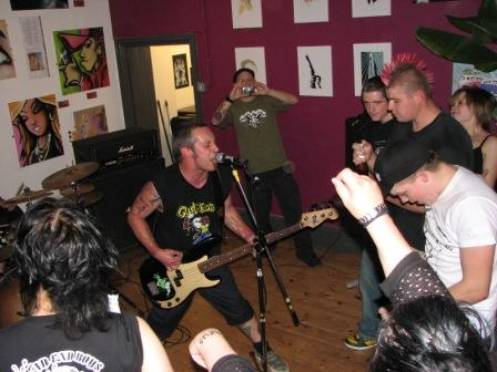 The first time I’ve got to see the new version of Stuntface with only Wayne remaining the core of it but I didn’t really doubt that given just how good they were previously they still produce quality now.  And for sure they did, as the flyer said, the best punk band in North Wales.  Even trimmed down to a three piece the energy transposed into their songs is electric, thundering along, and with vocals that are a perfect mix of harsh and melodic.  They kicked off with a song allegedly off their new album but it did sound suspiciously similar to Bad Religion’s “Generator” but the following mix of genuinely new stuff with some of their previous classics all stands up in fine comparison.  Again, he’s on relatively local turf but Wayne’s charisma is effortless and genuine, and the banter is hilarious, including the impromptu Bon Jovi cover inspired by the rock star like (electric) fans.  They are a band you can’t help but enjoy and even in the cramped confines there’s mosh mayhem, including from some middle aged bloke in a suit who’s been drawn in to.  First Sync then myself are slowly drawn to the last trains.  Just one more song.  Ok just one more again… etc. And even as I’m heading down the hill they are squeezing in one last encore.  The success of this seems to have encouraged similar events and that’s all to the good.  As ever, the more accessible alternative venues the better.  I heard an interesting rumour that one old favourite (West Shore club) may have a last blast before it is demolished, time to dust off the bike and help it on its way.