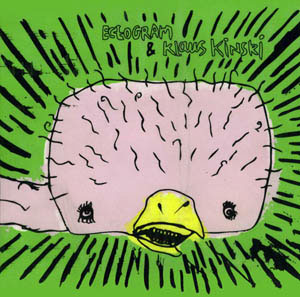 Gianthammer is a newly formed, fiercely independent imprint that is more DIY than the combined talents of Homebase, MFI and B&Q added together. Intent on offering an insight into the current Welsh extreme music scene, they have paired five tracks from acerbic noisemongers Klaus Kinski with a long improvisational piece from psychedelic trio Ectogram. There is over an hours worth of music here, guaranteeing value for money with the meagre £5 price.

Klaus Kinski somehow manages to include vintage German film, stomach cramps, incarceration, Nick Cave and church burnings into their demented press notes. If that doesn’t get your interest levels up, then I can tell you that this quartet are nasty, ridiculously lo-fi and completely in your face. In other words, they can be devastatingly brilliant, displaying diverse influences across their five contributions.

“Children of the Quorn” comes across like “Angel Dust” era Faith No More being force fed into a blender, with its mind-boggling half chant, half drawl. “Ecco Homo’s” guitar tunings are part Dillinger Escape Plan, part Sonic Youth and the quite fantastic “The Penguin” reveals itself to be an edgier, more vitriolic version of Shellac, if you could possibly get such a thing. The latter, in particular, impresses with the furious, whirlwinding guitar and jarring, Attention Deficit Disorder percussion.

Ectogram, meanwhile, weigh in with the half-hour long improv piece “Thirty Three and a Third”. While the raucous Klaus Kinski may be a hard act to follow, this sprawling odyssey of a track sets about winning the listener over with its subtle charms. The vocal style of Ann Matthews has similar resonance to that of Nico, while the backing instrumentation and clouded guitar textures direct this piece between segments of obscured psychedelia, discordant noise and haunting post-punk. God only knows what she is singing about though.