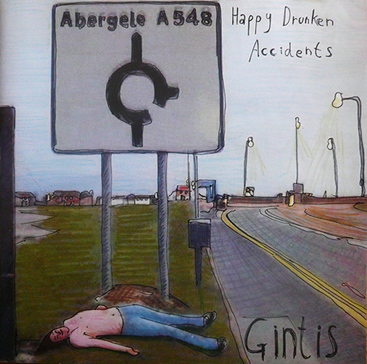 As the title of the post might suggest, this could be a post regarding the recent delay in delivery of our mail order from our shop here, and indeed may be even offering a suggestion as to why it has been slow recently… No, there hasn’t been a happy drunken accident which has caused this – for the slowness recently i apologise – things from here on in will be much slicker!

No this title refers to the recent mixup at the pressing plant and courier service; in that, on returning to the office on Tuesday I come to find stacked high what looked like the CD boxes we get from our suppliers… “I didnt order any re-presses”… Closer inspection the boxes are addressed to Slacyr Records, and have indeed come from our suppliers… “Have i paid for these?”. On opening a box, come to find out the CDs within are the new Gintis album!?!? A record i’d known about for a long time (and had a CD-R copy from the band kicking around for a few months), and a record i knew we weren’t involved with, entitled; “Happy Drunken Accidents”.

Anyhow, fortunately i knew the album was being recorded by and to be released by “Hidden Hive Records”, a new record label based in Conwy setup by good friend Steve Swindon (producer of SLAC003), the mixup in all of this was the pressing company and courier service making the assumpion of just one record label in Conwy, and delivered to me – a fair assumption? Maybe. But a typical accident / story involving Gintis. So, I tried to get hold of Steve and the band members Tuesday night to let them know their record was back, but with no joy. So I thought a fitting end to the story was to approach Steve unexpectedly with a copy of the album (with the other CD boxes filling my car outside) on Wednesday night as I knew he’d be down “The Malt Loaf” in Conwy running his regular acoustic indie night “Sonic Lodge”.