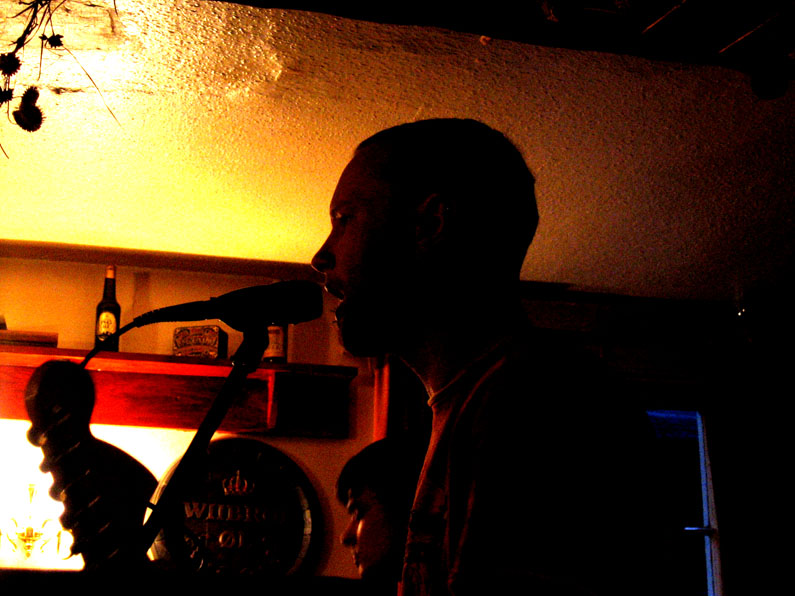 The flat pint of Stairway To Heaven guest ale I had in Wetherspoons turned out to be more like Hairway To Steven by the next morning as I guffed my way through the day with rumbling tums and the shakes. You shouldn’t drink something that looks like it was taken out of an infected bladder, but the bar was busy, the staff understress and undermanned and underpaid, so I winced my way through half of it and popped across the road to The Harp. Not exactly the hub of the Bangor music scene, but not a bad little pub.

Meeting up ex-Anhrefn rock legend Dewi Gwyn for some long overdue supping we took our seats stage side and anticipated tonight’s 3 bands. Ok, so Ten Seconds Out pulled out, so it was 2 bands. Ok, so Rebownder were ultra suspicious by their absence. So we eagerly anticipated Toadstool. Bangor’s very own Toadstool.

This fungi influenced band had a bit of a dilemma; I presume they were getting paid to play, and with the other two bands pulling out, they had to fill the time. When I was a young whipper snapper I remember playing in some dodgy dives (Porthmadog, Lincoln and Stockport spring to mind) where we’d have to play 2 sets in order to get our hands on the cash, so we’d pad out the first 45 minutes with untried bollocks and terrible cover versions.
We didn’t realise this until well into the second half of the show and Dewi initially described them as,
’Ar log guitarist meets disco bassist meets depressed vocals meets a good drummer.’
He was right about the drummer. The disco bassist was a mate who stood in for the first set, who looked more at home in a neo-fascist jazz-funk party band, and he incidentally recognised Dewi.
’Weren’t you Dewi Gwyn from Anhrefn?’
’No, I’m still Dewi Gwyn from Anhrefn.’
The final song of the first set Excuse Me, Fuck I Did It Again gave us a taster for the proper showdown and was worth the [free] entrance fee alone.

So a short break allowed us to hop and grape it at the bar, reminisce when Dewi was chucked out of Ellis’ in Rhyl for being sober and not smelling of puke, and to discuss Rhys Mwyn’s failed attempts at getting him to rejoin Anhrefn,
’Who wants to see 40-somethings saying Smash The System?’
Err.. well I was thinking of going to this year’s (and the last ever) Wasted Festival featuring a whole host of almost 50-somethings playing punk rock!

Toadstool had mushroom for improvement and kicked off the proper set in a ‘that’s more like it’ style – guitar was cranked up, they were back down to being a 3-piece and their aggression paid off when the landlady asked them to turn it down as there was an Old People’s Home across the road. Someone in the audience shouted,
’Tell ‘em to fuck off, they’re fucking deaf anyway.’
Oh that was us…
Dewi then went for a loud piss and was told to turn it down.
The BBC North West Wales website describes Toadstool as Indie-Grunge and the band lived up to that description with far better songs, a good voice, well suited to the music and the bassist even got some blonde bombshell kissing him on stage!
A good ska-punky number chundered along nicely although Dewi was a bit upset; being a vegetarian he found it quite offensive that the drummer was using a cow bell.

We talked too much at the end to catch the curry houses in Bangor so got ripped off in a taxi to Dewi’s house in Star where he kept drunkenly telling me how much he liked me and Rhys Mwyn…!