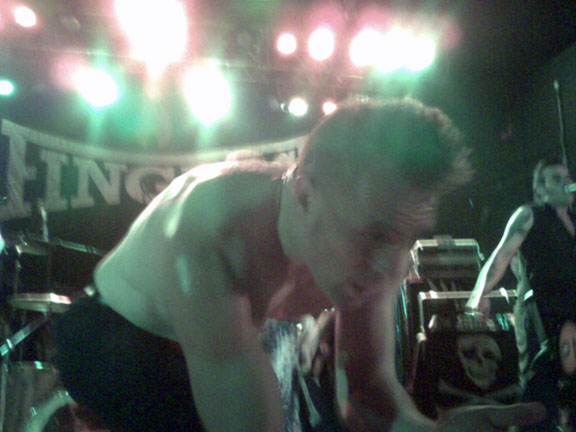 It’s March; so it must be time for the annual Stiff Little Fingers spring tour, taking in arguably their biggest gig of the year, the now traditional St Patrick’s Night at Glasgow Barrowlands. The tour could be split into sections decided by the support band; for the first half support was provided by Blood or Whiskey, for the second half Gold Blade took up the challenge. Those of you familiar with my review of Gold Blade a few weeks ago at The Dirty Water Club, London will be aware that I thought this was a brave move by Fingers, based on the sheer energy Gold Blade offer from the stage, and in my opinion having been blown off stage by them in the past. Only concern being that the Blade had only just finished a two week tour of the USA getting back into the UK three days before hitting the road with Fingers. 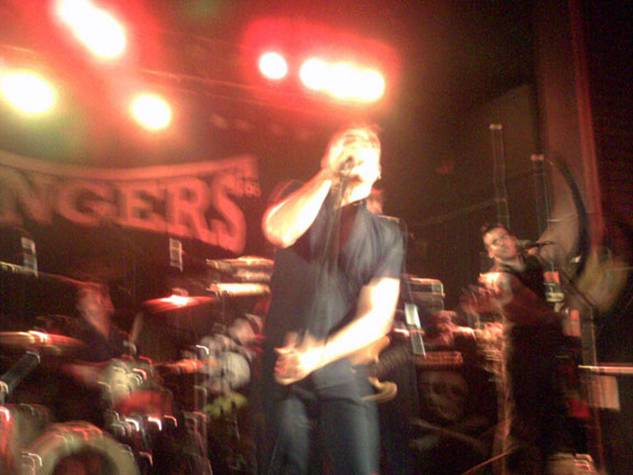 We travelled to Manchester, the main reason being that you can guarantee a decent crowd there, as opposed to the general lack lustre crowd in my home town of Liverpool. As we arrived we were not disappointed, the ‘Sold Out’ notice posted outside the venue promised good things to come, the only concern being that SLF had had to cancel the previous date due to Jake Burns having gone down with flu. Having taken a short refreshment break in the Jabez Clegg we got into The Academy in good time to see Goldblade.

Gold Blade took to the stage and set about immediately dispelled any worries regarding in jet lag, kicking off with ‘Fighting In The Dancehall’ which immediately roused the crowd into life, and then it was more of the same. As ever front man John Robb engaged with the audience, becoming the focus of attention, chanting ‘Kiss My Ass’, ‘AC-DC’, and then launching a crowd sing-along to ‘Psycho’. The band themselves compete admirably for attention with all three guitarists hurling themselves around the stage, the winner on this occasion perhaps being Johnny Skullknuckles, looking every inch the rock icon whilst providing some pretty fine guitar licks. Looking around at the now rapidly increasing crowd it was obvious that a lot of people were witnessing the Blade for the first time, what was also obvious was the way that they were won over, by the energy and enthusiasm, and the sheer quality of the material. A couple of older numbers including ‘Strictly Hardcore’ during which Robb was lost to all but those on the front row having taken to space in front of the safety barrier, before rejoining the stage with couple of female fans acting as temporary go-go dancers. The set closed with the awesome ‘Do You Believe In The Power Of Rock ‘n’ Roll’ with Robb by now literally laying on hands, baptising the some of the crowd into the world of the Blade. There was no way the Blade would be allowed to escape without an encore, so they came back on for a very appropriate considering the location ‘Home Turf’ and that was it, back to the bar to await Fingers.

By the time the opening bars of ‘Go For It’ began to come from the speakers it resembled a large rugby scrum at the entrance, staff struggling to get people in, such were the numbers; so when Fingers took to the stage the roar that greeted them was deafening. The most obvious difference in Fingers these day’s is that Bruce Foxton has gone, to be replaced by the returning Ali McMordie, the general comment pre gig was that this the best line up for a long time.

Fingers have evolved from a punk band into what now has become a rock band, the formula is simple; write songs based on your own experiences, with catchy audience chant along bits and play it at ear shredding volume, the result is a devoted fan base who every time you pause between songs chant ‘Fingers, Fingers’ back at you.

Tonight despite his prior illness Jake Burns was on fine form, introducing each song with anecdotal quips, with occasional comment from Ali, who seemed genuinely delighted with being back on stage. The set was comprised of predominately older material, possibly for the benefit of Ali’ ‘Wasted Life’, ‘Suspect Device’ and ‘Bits Of Kids’ still sounding good, a few newer songs ‘Strummerville’ the Joe Strummer tribute and ‘Guitar And Drum’ the title track from the most recent album.

Judging by the audience reaction tonight was a good set, 1300 people leaping up and down, and singing along to every word. Myself however; well I frankly preferred them in their ‘punk’ days, not that I would want them to have stayed there, still touring the first two albums etc, but for me ‘Inflammable Material’ was one of the most powerful debuts of all time, it was like a hand grenade thrown at the charts when it was released and I don’t think SLF have ever managed to surpass it; it’s not that I didn’t enjoy them, I certainly did; it’s hard not too with Jake Burn’s enthusiasm and a crowd reaction like this, it’s just that they were so good I don’t think they could ever top those days. Perhaps, and in support of my comment they closed the set by encoring with ‘Alternative Ulster’ that guitar riff still sounds as good now as it did 28yrs ago.

The pics are shit, but I mislaid my camera so had to make do with the phone..

I am going to Liverpool next week so this will give me a good chance to compare their performance, and on that occasion I will make sure I take my camera!! In addition I might be able to answer the question as to why it was £16 to get in at Manchester, and is only £12.50 at Liverpool.