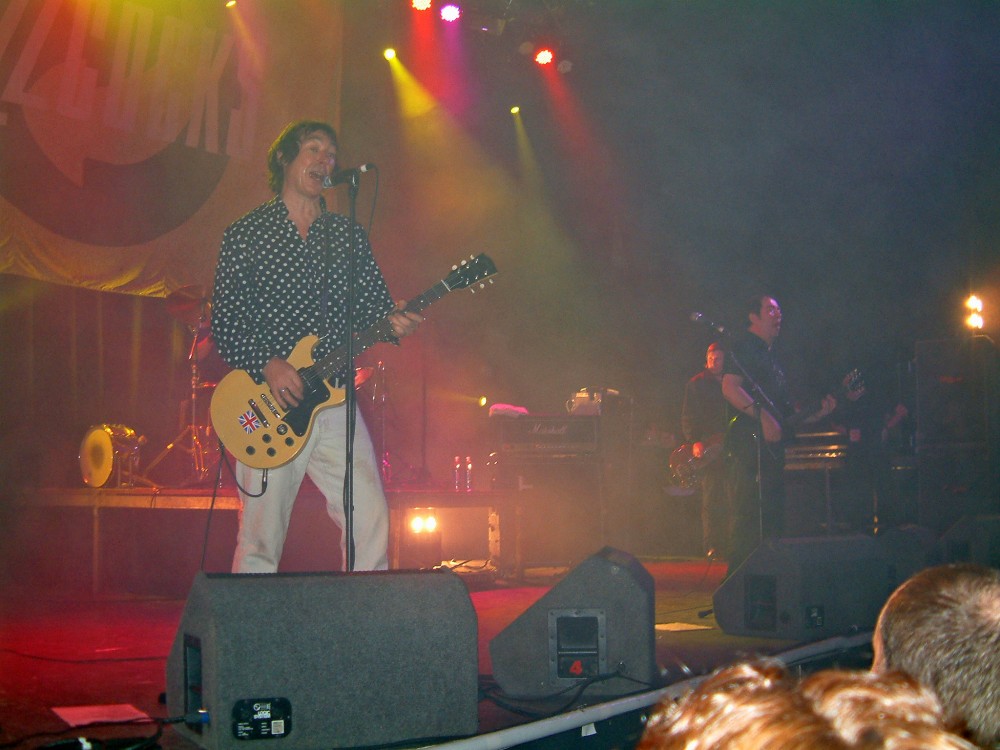 (review by guy salvador)
“Feeling like I’m almost sixteen again”!  That’s the lyrics to one of the early Buzzcocks songs & tonight I know what they mean!

The gig is more like an old school reunion than a rock n roll show, which in itself is a bit scary, having always shied away from those myself in the past but, this was real good fun!  Great to see some familiar old faces, even if, like myself, they are a bit rounder & balder than last time I saw most of them!  All those years ago it would not have been a venue in Pontypridd that the Buzzcocks would be playing rather, the then punk rock Mecca of Cardiff Top Rank, a place where I am sure, anyone from the punk era 76 – 79 & living in South Wales will have seen the then, new bands.
I saw Buzzcocks myself there a couple of times & brilliant they were.  Alongside their first 3 albums, this made them one of the finest bands originating from punk & they also have the credibility of really setting the indie record scene going with the timeless “Spiral Scratch” EP, released on their own New Hormones label.  The concept of this went on to launch thousands of hopeful punk rock EPs & 7 inch singles, which, for a very short space of time, sent ripples through the horribly corporate record industry.  Also, for us in the then dark, industrial South Wales valleys, they weren’t a London band & looked & more importantly, dressed similar to us, no £200 Seditionaries for these guys, more like a suit from War On Want & a pair of painted monkey boots or creepers!

Obviously, this was all a very long time ago & this is 2006, what relevance have the Buzzcocks got nowadays?  Well, judging on tonight’s performance quite a lot I would say.  The tour is genuine, not just a greatest hits, reunion thing, put together for a couple of bucks. They have new album out called “Flat Pack Philosophy”, which is great…..  Maybe they are guilty of regurgitating familiar old guitar riffs from their back catalogue, beefing them up a bit & presenting them in a slightly different way but, judging by this “sold out” gig, alongside us diehards, there seems to be a whole new generation of people going to see Buzzcocks who have never heard their old stuff, to be honest I have no problem with this anyway, they still sound like Buzzcocks to me & that’s cool!

Starting the set tonight with the title track from the new album, “Flat Pack Philosophy”,  with a few other more new tracks following, all in typical Buzzcocks style.  Pete Shelley & Steve Diggle (could that waistcoat be whiter or tighter), the 2 remaining originals in great form with Diggle running through his full “guitar hero” repertoire of poses, great performer.  Check out his autobiography – “Harmony In My Head” for a great rock n roll read.  There are enough hits & oldies to keep everyone happy, performing material from the full 30 years of their existence, it must be around a 25 – 30 song set so also, great value.

I have seen Buzzcocks many times over the years & they can sometimes suffer with dreadful out – front sound.  Tonight was better, with the excellent Muni venue contributing to this.  Great to see this old building being used for something that people want to see.  I’m sure that the Muni usual roster of, Folk singing One legged bearded Hungarian women need somewhere to play but, the good people of Ponty have proved they prefer Buzzcocks !