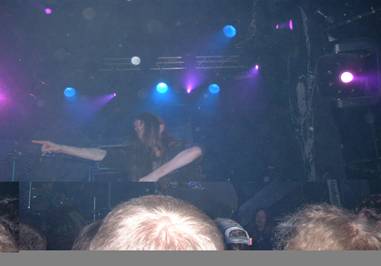 The band are Bolt Thrower, undying Brummie Death Metallers, first encountered via seismic Peel sessions, then at an all-dayer in Liverpool’s Planet X that I went on the old x5 bus to.  In those halcyon days they totted up as probably one of the bands I’d seen the most times, especially due to regular appearances at Wrexham Memorial Hall while I was in college there, that venue now buried under a tesco’s car park like some disturbed native burial ground.  So while trends moved on the band continued plugging away though mainly in Europe, where they could still entertain thousands as opposed to eking a crowd out here.  In passing in the late 90’s I read an article on Bentley Rhythm Ace that referred to Bolt Thrower’s singer Karl being round their flat and declaring himself giving up the music biz and shaving all his hair off.  The band still continued in some sorts but as of last year he’s been born again in the metal mould, got back beyond mullet stage, and they now line up their first UK tour for over a decade.

The venue Rio’s seems to be a winner for memorable reunion gigs.  The (new) Misfits I saw here when they played their first ever shows in 96, then Obituary a year or two ago was another extremely satisfying return from the dead.  It’s an excellent set-up though in terms of sound and visibility of the bands.  The headliners themselves have ensured a low ticket price to maximise numbers plus the merchandise is dirt cheap as well, they operate with out any industry bullsh*t or ripoff and gain all the more respect for it

For company we had a whole people carrier full of the North Wales massif, similar were gathering from all over, even from the midlands as this was the only date bar Scotland and the South, adding up to a healthy crowd over the course of the evening. 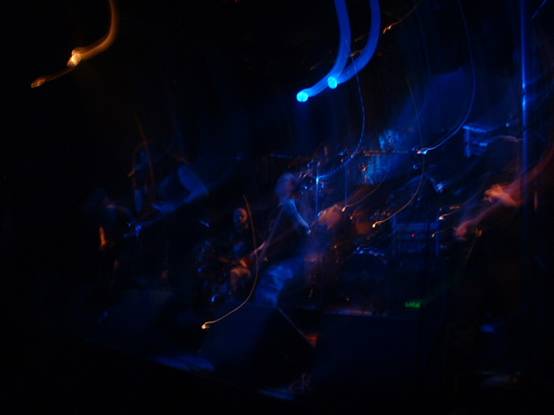 Things kicked off very sharpish, with locals Bloodstream up and running within 10 minutes of the doors, as became apparent later, to fit everything in for the “club night” later.  They were very solid, creating an interesting mix of traditional yet contemporary metal.  By their own admission being a cross over between metal, punk, rock etc. sometimes they hit the spot more than others, playing quite a variety of speeds and moods.  The last song I enjoyed best, getting up into Discharge speed riffing and they warmed the place up nicely. 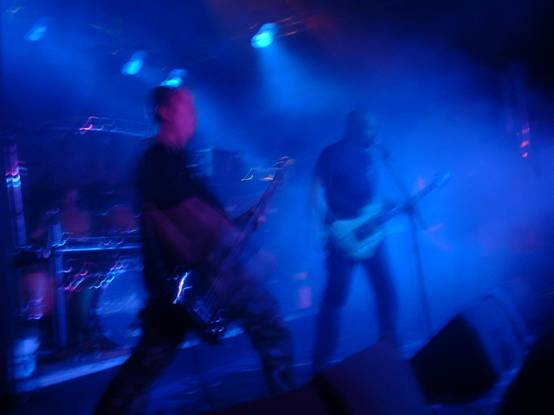 God Dethroned were a late addition to the tour, and proved to be another good ratchet up of the heaviness.  Scandinavians themselves, they did seem to be coming from the same base camp as At the Gates or some of the more post-death like The Haunted. It’s death/thrash riffs with more melodic breaks thrown in, lyrically they follow the path their name may suggest.  Not overly complex or strikingly original but done with an intensive energy and precision that holds the interest. 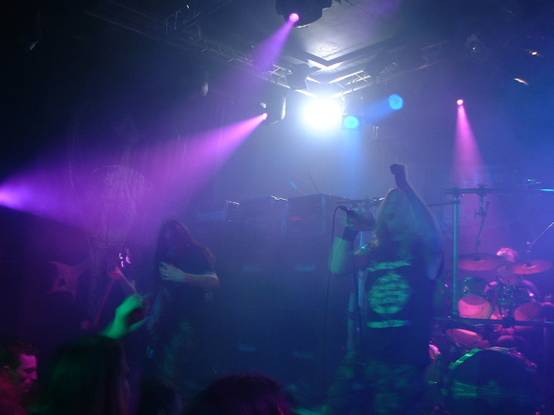 To an epic brass fanfare appropriate for returning kings (or some spaghetti western) Bolt Thrower came on stage, not looking a decade older for sure.  Fair beaming at the reception received from the first song they are on the button, immense.  They are masters of build up intros between the two guitars and bass (played by the lovely jo bench, a death metal pin-up although there’s not exactly much competition in the genre) before stabs kicking in and the thunderous doublebass drum underpinned chugging and churning riffs kicking in.  They have been criticised for not developing their sound or style much but it occurs to me tonight that it may well be because there’s a formulaic element to what they do that makes it so effective, when the basic ingredients are so fine.  And, as Karl roars in one song, “No compromise”.   All structures seem to be in multiples of four bars, so you always get the feeling you know when instruments are going to drop out or explode back in again, their slower sections of their hymns to / obsession with war through the ages have an almost characteristic melancholy feel. I am possessed to mosh with no regard for the next day’s whiplash.  A lot of the new album “Those once loyal” is aired tonight and the quality is right up there, the deep roared vocals are excellent.  When a couple of their older tracks, “Warmaster” (done as a virtual instrumental) and the classic “Cenotaph” are played back to back it’s enough for me to get carried away enough to commence the stage diving for the evening, and get carried away properly!  Can’t describe the elated emotions, the flashback, the adrenalin, it’s as good as it ever was.  From the reaction of the band to the unanimously positive response as they fade to tumultuous feedback at the end of “when cannons fade”, it’s a massive boost and reassurance to themselves as well. 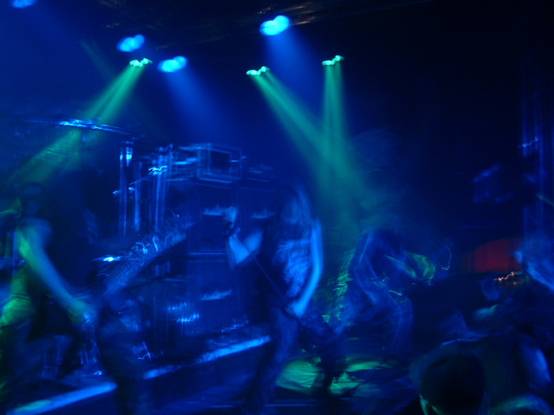 There’s no hanging about before doing a couple of song encore, ending with the anthemic “for victory”, their set may even have been cut short by the place going over into its club mode, which is a little frustrating to think we could have had more of the same, and naturally empties ¾ of the place, brings in some folks who probably wouldn’t have a clue what they’d just missed.  Still, we hang around for a bit and are entertained by loads of emo inspired fighting, like wild west bar room brawls, literally having to mop blood off the table we were drinking at.  Another lesson learned, good music = good friendly violence, bad music = bad vibes/bad aids. 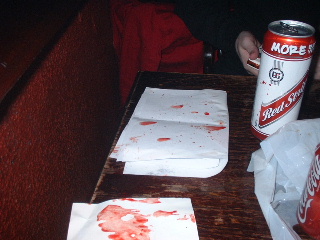