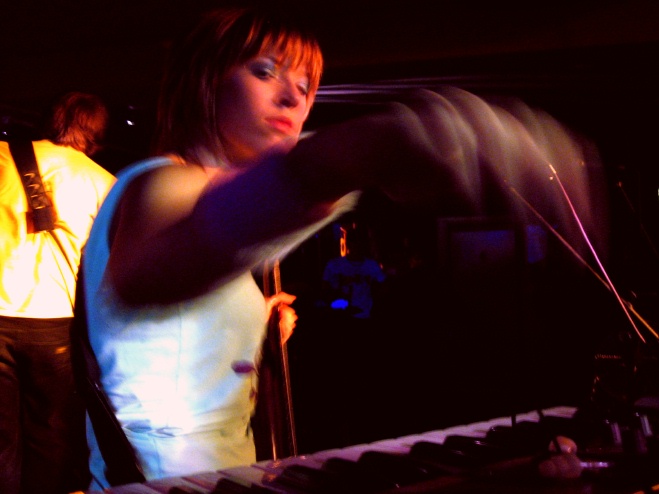 Quality.
I could’ve ended this review right there as it would have summed the gig up perfectly, and all those in attendance would be wrong to disagree. 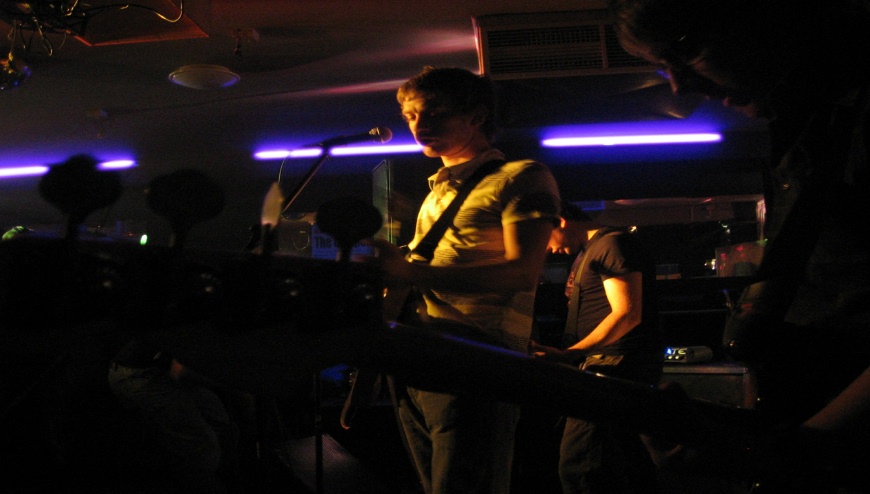 Good to see the lazy twat called Adam has finally got a band together as the 2 track demo that Steve Frodsham burned off for me proved that Grain and Breathe It In by Prestatyn’s Oysterboy (pic above) should not be condemned to the bedroom. This I think is the debut appearance by the band and they have carried on from where the excellent Hypertraffic left off. Musically in a very similar vein, if not exactly the same. Yes, I’m a lazy hack so I’ll use the Joy Division adjective as the immediate comparison, which owes a lot to Adam’s voice. I never liked Joy Division, yet I love Oysterboy – maybe I should buy an album and write ‘Oysterboy’ over the sleeve in with a thick black marker pen!

We were out in force tonight, as well as my good/bad self, I had the company of Mr and Mrs Fatman, Steve Sync, Martin Wilding, Budgie, my sister Jane Crud and Steve F. Martin (forever technically minded) commented, ‘Boom boom crack on the 8’s, half-open hats also on 8’s. Guitars all Tele’s, needs a bit more meat in the chord work, and vocals need work, otherwise pretty together.’

Breathe It In is almost a hit and I was in awe of myself at being privileged to see quality bands in North Wales. Jane Crud was a little more critical with her analysis and wrote down on my notebook: ‘2 milk, 1 eggs, 1 bread (wholemeal).’ Steve F however summarized with, ‘through the sinking trouser flaps of a random existence they probably most resemble all the bands they don’t want to sound like. Part Bloc Party, part mid-shoe gazer period Ride, and part Coldplay. Effects laden searching for a sound. They’re tight and look the part, even George Dawes on drums.’ 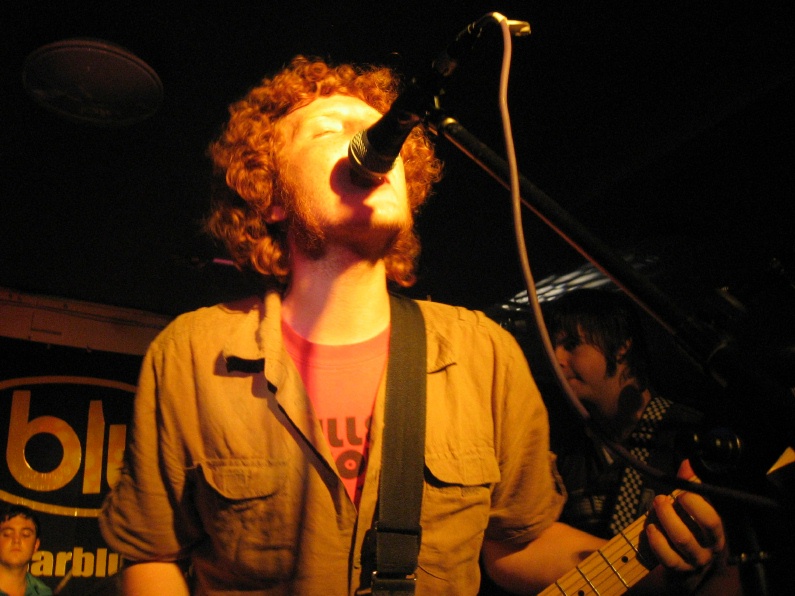 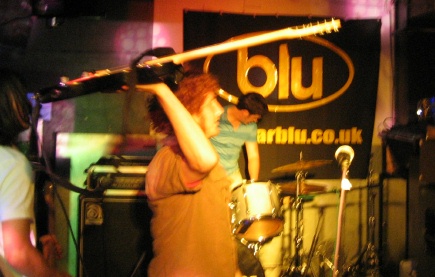 Enter the bastard son of Noddy Holder and Bob Dylan – Kyle, guitarist of Gintis and front man of Jives Room – that should read, part time front man of Jives Room, for that is what they are, part timers who seem content with playing twice sometimes thrice a year. But I guess those couple of times means its an honour to see them in our own backyard and we’re always guaranteed a cracking performance. The label reads ‘Jives Room – satisfaction guaranteed.’ As with their gig here last May, they slammed through their set and Kyle’s contorted face, as red as his hair went hand in hand with blissful dynamics. For those 30 minutes, the normally serene front man plays and lives the part of a certifiable deranged psychopath, leaving you unsure as to just where that guitar is going to end up as its being swung over his head. Great Stuff. 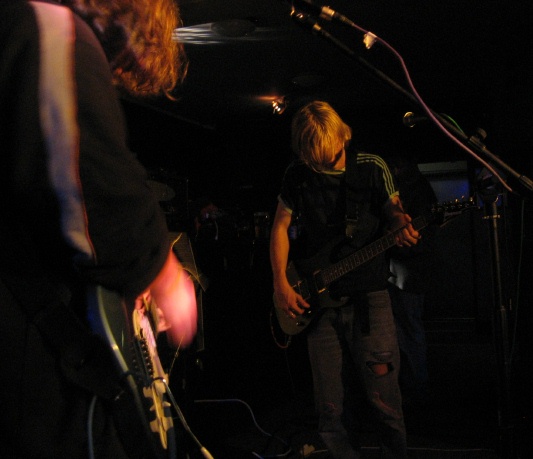 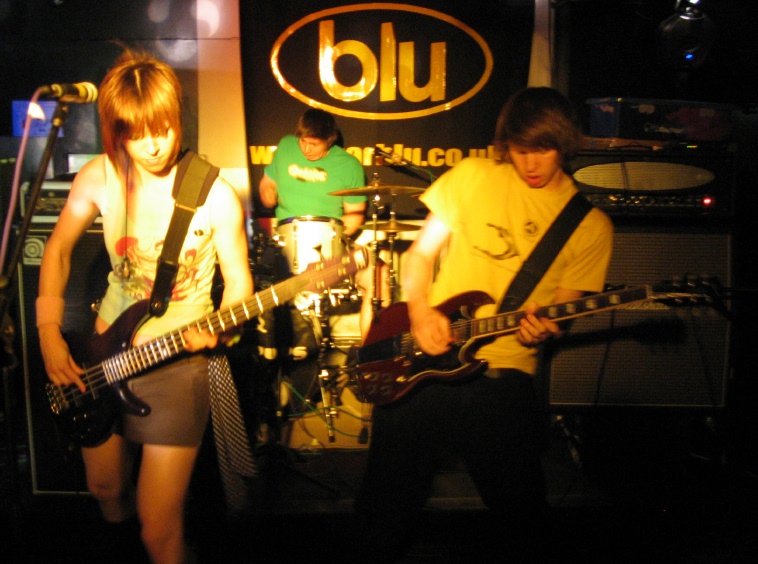 That next band was Bitchpups (pic below), who had sat downstairs all night looking bored shitless. That was always the down part of being in a band, the waiting around. If The Bitchpups had a tour bus, it should have the slogan ‘The Bitchpups – We Don’t Fuck About’ sign written on the side of it. And from the off they may as well hit you head on with that tour bus because there’s no let up from this family unit – The Modgets (now there’s a good band name) are fronted by the 6’5” wiry frame of Matt, who is flanked by the bewitching Hannah on bass and backed by the solid Gaz on drums (who looks like Clunk off Wacky Races!!). Songs like How The West Was Lost and Year of The Dogs shows their pedigree [ahem!] – gig after gig after gig pays off with a solid, seductive and fucking superb portrayal of punk rock’n’roll at its utmost best. One song will bring you down, take you up, bring you back down again, shoot you up then spit you out; and that’s before the first chorus. Exhilarating. They should be your favourite new band. They’re certainly mine… 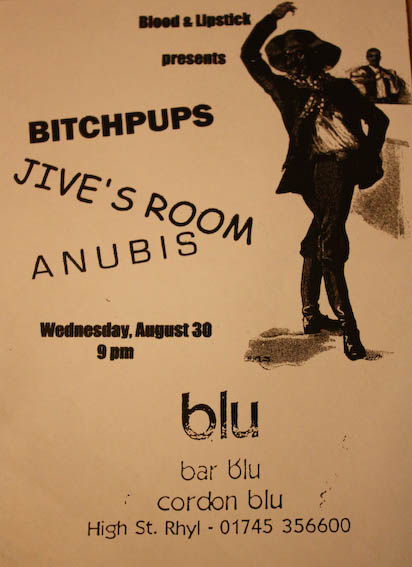