‘A star is born – Kyle Gintis says to me in soundcheck “you can tell they’re gonna make it already” – you boys (DER BOMBER) have got it. Hate to think how awesome you’ll be in a few gigs – we were upstaged. Also The Loungs – what can i say? i fucking love that band – AWESOME line up completed by us last night – admittedly our performance was lacklustre, but i was far too wasted to interact with the crowd sorry! one time, oh yeah and we had sound problems! Dave wasn’t being sound enough’

That was the message Carl Gintis left on the link2wales message board this morning, and two thirds of it are true; yes a star is well and truly born in the shape of Der Bomber’s frontman and first night nerves aside, you did know by the end of the first verse that they’re gonna make it. Carl fucking loves the Loungs and he and his Gintis crew stood there in awe as this six piece marched through their set pick-pocketing the Beach Boys, Madness, The Killers and the local amphetamine dealer.

The bit that Carl got wrong was that his own Gintis performance was lacklustre. It wasn’t. Reading the drunken scribble in my little red book I had jotted down the lyric,

’I can’t be around you all the time.’

And even typing it now is sending shivers down my spine. Gintis should be millionaires.

The whole show nearly didn’t happen. Steve Sync and myself were happily chatting at the downstairs bar about brutal-dildos.com and downing a pint everytime Arsenal put one past Everton, when a flustered Steve Rastin turned up to say the PA wasn’t too well. We both knew that the old silver foil as a fuse trick would be the answer and lo and behold, Rastin reappeared relieved to announce that a Wrigley’s chewing gum wrapper did the trick. Which was good because the venue was filling up with people wanting to see what was going to be one of those ‘I was there’ gigs.

‘If you like catchy pop music and have the balls to admit it, then the Loungs are the band for you. Otherwise, go listen to that guy on Jools Holland that no-one’s ever heard of. Yeah, the one with the limp. OR get with the program and in the words of Brian Wilson “Smile”.’

That’s what The Loungs excellent website tells you what to do and that’s what we did. They were loved by everyone and having played to virtually the bar staff and a few shell suited scallies here last January, they were not only rewarded by no one leaving for the early kebab cab home, they were lapped up by huge applause after every song.

’Describe The Loungs for me.’ I asked various punters.

The answers ranged from what I’d described earlier with additional Kaiser Chiefs, Gomez, Super Furries, Spiritualized, the Bees, and very hairy. The brilliant harmonies give Dan, Neil, Pablo, Gaz, Wills and Jamie an edge, although Dean Obscene (he of the Psychosexual Sex Terrestrials) did say, visually they look like Chas ‘n’ Dave do electric! 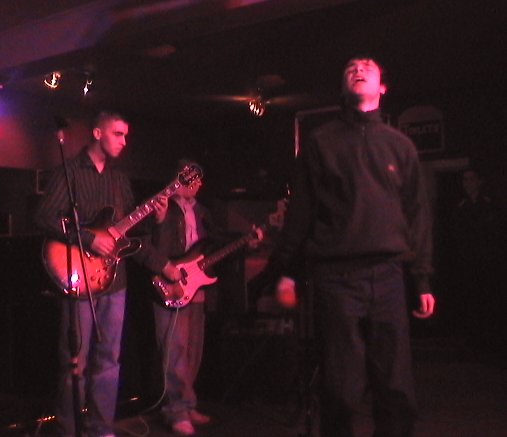 And that was coming from the once self-proclaimed saviours of rock ‘n’ roll, a mantle I think they’ve now passed on, quite rightly to Der Bomber, but we’ll get to them shortly.

Mr Gintis was probably right, it could well have been the best line up Blu has ever seen and there have been some special nights at this venue, and it’s of no coincidence that Gintis were playing at all of them.

They taken their knocks over this year after initially taking off on the crest of a self-hyped wave they crashed down to earth with the realisation that the only thing to land on your lap is your own dinner when you spill it. A lot of bands would have split after the euphoria of all the early attention had ebbed away and even as late as last March Carl was hinting that all was not well within the Gintis camp.

Enter Marc from Slacyr Records who probably saved the saviours! Having released their ‘Supersoakers’ EP late last year, he booked them on his label’s One Year and One Month mini tour of Wales, a morale boosting exercise that played to sell out crowds and knitted the loose ends of the band’s set together.

What’s a Gintis set without some sort of sound problem, this time it was an incessant buzzing from a guitar or Dave’s Cash Converters organ, or maybe the static in Kyle’s electric hair, but that aside, Bar Blu gorged on absolutely sublime songs and Gintis should really be a household name.

I did feel like phoning Adam Walton there and then and press him to offer them another Radio Wales Session, as the Gintis bandwagon is really ready to roll. They need people like myself, Marc and Adam to push them as best we can, but more importantly we, as in everybody, need them.

Which brings us to Rhyl’s newest kids on the block; Der Bomber. They announced quite vociferously last month on my Message Board that they were ‘were five lads who are here to show these bands who think its cool to write and play half-arsed songs how to do it properly.’

This was like the Gintis factory of hype all over again and their first gig was pants! Relentlessly the Der Bomber blitzkrieg continued,

’…come down and see us for whats gonna be the best gig night Blu has ever seen. Its inevitable.’

’This is for all music fans: u wanna hear the best up & coming band in europe perform live then pop down 2 blu this wednesday and be blown away by DER BOMBER!!! With lyrics that challenge that of John Lennon and Paul McCartney you will be amazed. Its a new era…..the era of DER BOMBER!’

People were warning that they can talk the talk so they had better be able to walk the walk or they’d be leaving Blu with egg on their faces. Although Steve Rastin did offer them a buffer,

’Surely the hype has already achieved what it set out to do: it’s got a lot of people talking about a band that few of us have seen or heard yet. OK, they may crash and burn on Wednesday but so what? If that is the case there’ll be nothing more serious than a few red faces but if they live up to the hype they will have earned themselves a profile that most bands take at least a year to achieve.’

And, nervous drumming and rigid guitarists aside Der Bomber certainly did live up to their own high expectations. The Liam Gallagher swagger was as obvious as the snarl and maybe this young but very confident and cocky vocalist is the bastard son of Liam and Ian Brown. His stance said,

’Look at me, I’m fucking ace and you’d better believe it.’

And he was right! Perhaps I’m hamming this up a bit too much, the ‘better than Lennon and McCartney’ lyrics were inaudiable due to the Blu PA and if I was watching an established band I’d have been tutting, but this was their first gig and they hit the ground running. I only hope they now have the stamina to keep on running and not get lapped up by the local hero syndrome that affects so many good young bands.

Sync said he’d love to see what they’ll be like in six months and that when they polish their set up they’ll be ace.

So maybe Der Bomber are the best up ‘n’ coming band in Europe, their only hope that they don’t believe their own hype and knuckle down for some hard work ahead.