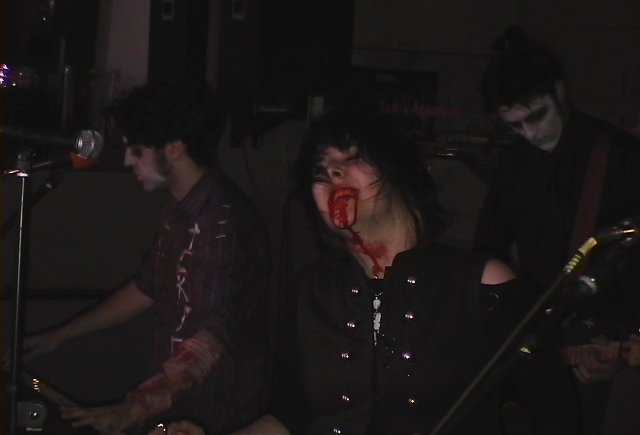 ‘Why does Steve Rastin look like he’s on a cruise, or an extra on Love Boat?’ Enquired Ste Sync as Rastin passed us in his summer attire. He had reason to feel colourful, he had booked the long awaited arrival of Zombina to our humble no horse town. But first we were warmed up by Delayed Promise from Manchester as Andy Fatman explains: 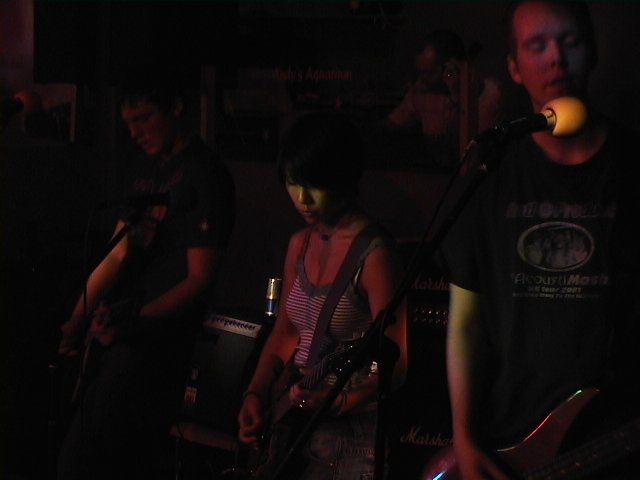 ‘What language was she singing in? I say this cos the vocals were so muffled it was hard to work them out against a musically tight power-pop-rock background. And why does the drummer always feel the need to embellish any between-song banter / info with flourishes of cymbals…? Resulting in a nightmare for reviewers!
The guitarists vocals didn’t fare much better, proving that soundchecks are a pointless exercise. But amid the PA problems, promise was shown from a visually static performance that influenced the gathered few. This was always going to be an uphill struggle, going on before Jives Room (with their home support) & Zombina (striving for legendary status in these parts).’
Great third song; good riffage, great drumming, would love to hear them on CD. 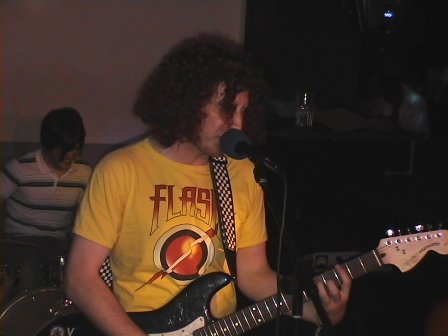 There had been rumours that this was to be Jives Room’s final gig, which was news to them and as Natasha explains it was a top performance with some good new songs ending with that timeless ‘CAM’ with the words “Fuck fuck fuck Cymdeithas.”
’Jives Room made a welcome return to the live circuit with their rousing rock’n’roll anthems. Kyle “The Accusing Angel” shouts and sings with angst and style, he’s definitely one to watch for the future. Their first gig in over a month was admirable, well timed and on the pulse with a tighter set. It feels like they’ve never been away. We love ‘em!’ 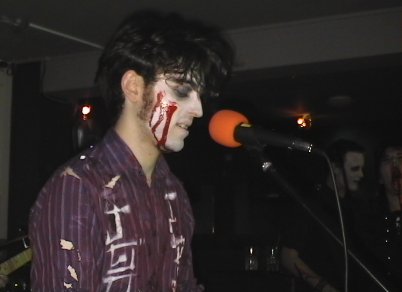 The arrival of Zombina and The Skeletones has been long overdue after a couple of aborted attempts at getting them to Rhyl, the beach boy Rastin finally got his claw hammer out to tug the last nail out of the coffin and release the bats on Blu. It was another sell out crowd and they were in for a treat.
With the theatrical blood flowing from every available orifice in wonderful contrast against the pan-stick make up Zombina delivered a horror-billy show. We were saying it would’ve been ace to have lived in the 1950s when all this kind of stuff was about, a sort of deep south demented rawk! But we weren’t sure if the original bands playing it were from the sixties parodying the fifties; does anyone know the answer to that? We can all turn around in our graves and yell The Cramps! But it was The Cramps who copied the sixties bands. Regardless, it was all ace and so are Zombina; and to my knowledge they’re the only ones doing this stuff right now.
Playing a selection of choice material including the excellent Counting On Your Suicide they too were dogged with the quiet vocal problem but the audience lapped it up for the 35 minutes, and for once I wanted more, but you don’t get an encore at Blu, and its good to be left wanting. More please. 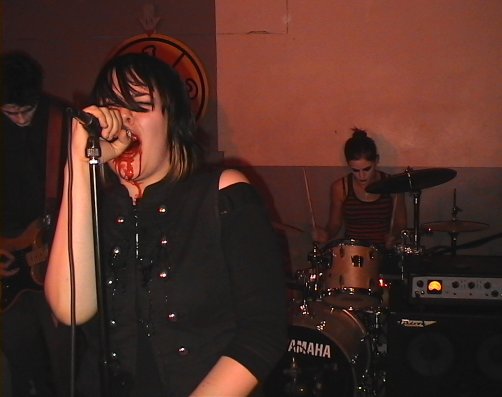 How Do I Get You To Review a Gig / Or Submit a Review? The Dirty Weekend, Dudley Arms, Rhyl