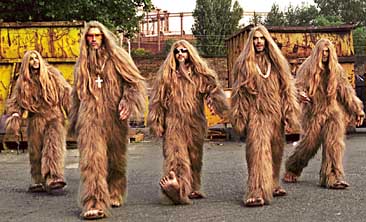 The first time for many years that the “Memo” in Barry has had a gig of any type of profile, and what a band to feature, Wales finest the “Super Furry Animals“! Who are playing the gig as a warm up for their upcoming festival dates.

Sticking with the venue for a few seconds it’s a real shame that a great old venue like this is not utilised more for contemporary gigs / shows etc. It’s a great old high ceiling’d hall that, during the 60’s, in common with many other venue’s of this ilk in South Wales was on the circuit & featured all the top touring bands.

This being the case the good people of Barry are somewhat starved of local live music above pub level, which augured well for support band “Zabrinski” who were greeted to the stage by a good size crowd, enthusiastic to hear them. Zabrinski have just released a new album “Ill Gotten Game” which is gaining many plaudits within reviews I have read & are generally well thought of across the Welsh music media etc. I have seen Zabrinski a number of times in the past, as they are a regular support feature for the Super Furries. They are a bit of a strange band for me as their set tends to drift in & out from being interesting, gripping & experimental, particularly when they concentrate on the more drum, bass & synth stuff to bland & boring for the more traditional style songs. I also find that the band don’t really “entertain” as a live act & provide a very static stage presence which wasn’t helped tonight by the virtual lack of lighting on stage which meant the poor fella’s were in virtual darkness for the majority of the set. This fortunately made no difference to the Barry crowd who liked Zabrinski a lot & I am sure the band went away feeling like they had had a good gig, which they did. As for me I think I’ll have to get hold of some recorded work, as I feel at the moment this is possibly where their strength lies?

There is a lot of anticipation of tonight’s Super Furries set. Featuring songs from their new album “Lovekraft” which is released on August 22nd. Also, a new stage show, with the demise of the Yeti’s at the Hammersmith Apollo last year, what will the band have up their sleeve? By 09.15pm the audience are packed in & enjoying the tracks from the “Under the influence album” (album of tracks selected by SFA members) and in the main are noticeably very pissed! As the opening sounds of “Slowlife” pierce the “Memo’s” space the crowd go nuts as all the anticipation finally culminates. The band hit the stage in what I can only describe as a “Radioactive Shepherd” look! They wear some sort of odd illuminated hooded suits that light up under the blue lights, does it mean anything? Doesn’t have to, it’s the Furries! Unfortunately a dodgy sound for the first couple of tracks Slowlife & Rings around the World & overall, the gig in general seemed to have lot of equipment glitches & a couple of mess ups which are not usual for the Furries. I think there was something up with the band tonight, can’t put my finger on what it was but something……. Anyway, back to the set. The first of the new “Lovekraft” songs was next. Great vocal by Bunf, called “The Horn“. This song wouldn’t be a-miss on the “Wicker Man” movie & something different, great stuff. The other new songs played tonight were, (I apologise if I get any titles wrong, it’s my best effort!)

“Zoom!” “Frequency”, “Laser Beam” (new single), “Oi Frango”, “Atomik Lust” & “Cloudberries”. All but “Cloudberries“, which just didn’t work…. sounded great & range from “Frequency” which is a trad style Super Furries guitar / vocal track to the monstrous “Atomik Lust” with ELO style vocals & a massive sound! There is also a good selection of some older songs, including “Run Christian Run“, Do or Die“, Fire in my heart“, “Hello Sunshine” “Juxtaposed” “Something 4 the weekend” amongst others, finishing off with the eternal, Man don’t give a fuck”. Scaled down from the 26 minute version they were doing last year to a more reasonable length. Also, showing on the screens, there’s a great little gallery of contributors film-show, shown at the end of the set when Cian is doing his thing, which sort of reminded me of a piece on a “Beastie Boy” video, when they were 70’s TV detectives, that was out a few years ago? Good fun!

As gigs go, not vintage SFA but, even on this form they surpass most others & its early days for this set, I look forward to next time….

Not going to write another review, just a couple of comments:

Same set but played much better, exceptional in fact. Somerset House is a perfect setting.
Suits didn’t light up tonight as light obviously not right for it, maybe something to do with being outdoors?
Gruff made some untimely, misunderstood & unfortunate remarks on the London bombings which were met with boos & jeers. Not going to go into it here but would have been better to have kept it zipped Gruff…….