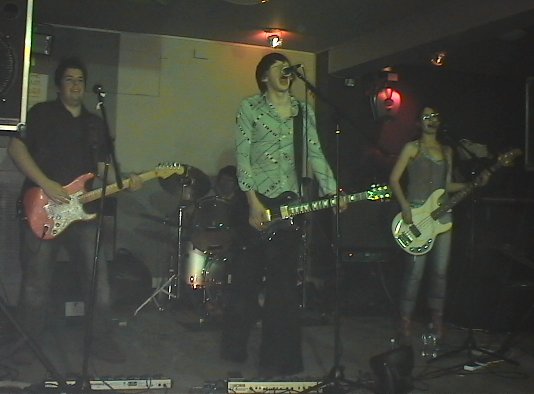 Some bands have it, others don’t, some bands earn it, and others won’t. Hey! I should write songs!
The Bitchpups (pic above) are a band that definitely have it and have undoubtedly earned it. Their professionalism stands way above the rest; not that this is a competition, but if I were in a band and watching I’d be making mental notes for my next performance. The style, the delivery, the songs, the look, it was all there and it would be of no surprise to see this band go far.
With no disrespect to Blu, The Bitchpups are way above a venue of this type, but like I said, if you’re gonna earn it you have to put the graft in and travel half the country from Monmouthshire on a Wednesday night to do these kind of shows.
Steve Sync (who actually got a tip off the taxi driver tonight) quipped; ‘They don’t come from a town where they’re influenced by the “same old same old”, they’re a breath of fresh air in a night of same old shit.’
The very long front man Matt Modget looked and played the part and any song could go from indie-punk to ska without sounding cheesy. Rachel Lewis on bass certainly wasn’t there simply for her good looks, she knew how to handle her instrument and wasn’t afraid to use it. The quiet but very effective Dan Harris on guitar sprang into life for the finale and legged it through the venue while playing to end a great night of music. They have an EP called ‘Twin’ available, I suggest you check it out.

All three bands tonight were all making their Blu bow and I have played Flamingo by The Bitchpups on my show a couple of weeks ago. I had only just found out about Sona and never heard of the Beehive Project. So it was a night of discovery and Sync picked me up at 8pm and I was on a promise not to exceed the 6 pints of Carling threshold in order to prevent making a fool of myself. I of course sank at least eight, insulted everyone and fell into the kitchen table when I got home, so it’s Perrier Water from now on… 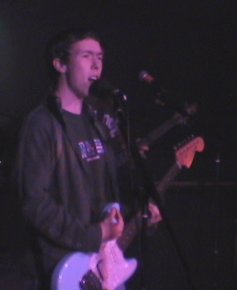 From Bangor Sona (pic left) are a very young three-piece band, no doubt brimming with ambition and excitement and eager to share their talents with the punters and travelling contingent. This was probably their first gig and if they thought they were going to set the world alight then one look at The Bitchpups would have confirmed that their box of matches would need some drying out first. But that’s not a slur at Sona; it’s just a fact of life and a fact that’ll disappear with the more gigs they play. I was just thinking the guitarist/vocalist had a Cobain like voice and he iterated my thought by dedicating the third song I’m You to the headless Nirvana front man. This was more like it, with great dynamics and good use of that high presence non-distorted guitar. Swiftly followed by Frustration with a Joy Division opening and a White Stripes cover to boot as they loosened up and got better as the show progressed. A version of Hey Joe wrapped things up, but Sync wanted to boo and send them back to double Geography for covering that song, and went as far a wanting to butt the singer on the side of the head! Yes you should be bored a new rectum for covering Hendrix, but it was the best version of Hey Joe I’ve heard after Nick Cave’s.
Sona had loadsa roadies to pack their stuff away, even that Geography teacher complete with scarf! Although, coming from Bangor he probably teaches Use of Needles; or Needlework, as they like to call it. 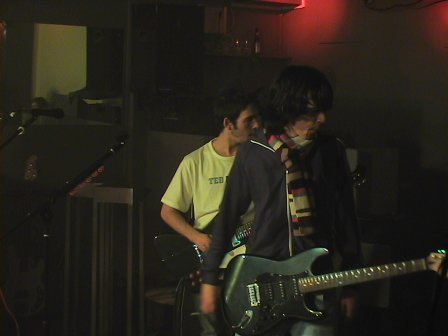 Filling the middle slot came Holywell’s Beehive Project (pic above), from a town quite often void of any decent bands for a long time (remember The Grids?). Being closer to Liverpool gave them the look of a scally band with skinny boys, trackie tops, baseball caps, and a full on fret wanking guitarist lurching into the crowd at any given opportunity.
I heard Sync discussing the band, he thought they were shit, but they started off well, full of enthusiasm.
He continued without making much sense; ‘It’s the flicky hairstyle and they need something decent to play, rather than gay guitar wanking.’
Someone else mentioned that; ‘They’re better than the last band, more animated.’
’I don’t do visual stimulation,’ Sync said. ‘I thought Valleum were like this the first time I saw them, and they turned out great.’
On the music side of things we got a decent eclectic blast of block rocking trashy stuff, with plenty of guitar solos. So much that Steve did want to place the guitarist in a hot bath with all his equipment switched on. The drummer then took over vocal duties in his raggy socks to spaz out and then things got a little silly with an acoustic song, by now they should have finished the set and be tucking into their free beer instead of losing the audience because up to the no shoes bit they were pretty impressive.
Four pints of water and two paracetamol still made me feel like shit the following morning. So its Rhohypnol on the weekend… 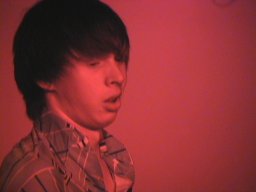