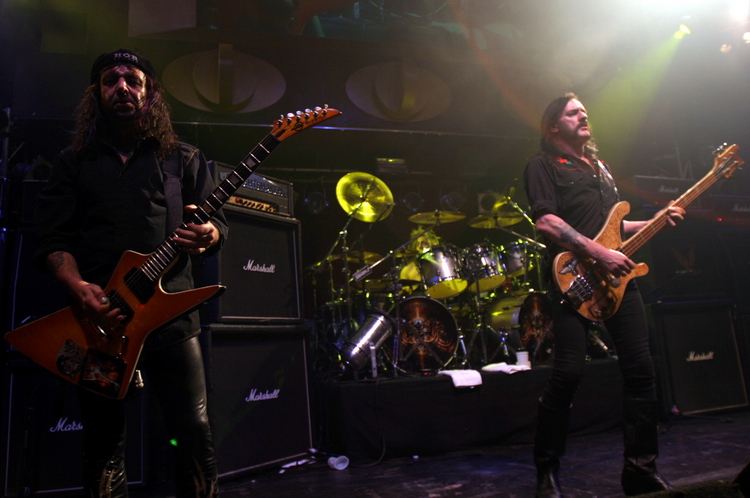 Even without the greying/balding hair, laughter/frown lines, senility, on-set Parkinson’s shakes, impotence, slow reactions, failed marriages, alienated kids, and hopeless, downwardly spiralling, endgame outlook, you’d still have Motorhead to remind you what an old b*stard you are.  The first band to really (blow) open my mind to music (“call that music?”) I got into them soon after their 10th anniversary in the mid eighties, and so, having not seen them live since the early nineties, figured in the year of their 30th would be a good time to renew acquaintance with this oldest of friends.

For some reason Liverpool seems to be inundated with Academies, 4 in this location, plus the Carling and presumably they have a football one where they teach them to put the jouse in Scouse and pass themselves off as worthy European champions (J).  Hadn’t been to this one before and had a bit of fear when not finding it at first, but it’s round the back of the easily spotted RC cathedral.  Despite being late the queue was still stretching outside, so for a while had to wait enduring not the usual native wit and humour but some southern stoodent w*nkers instead. Well, I suppose I was one once, student that is…still a w*nker but thank god I wasn’t born in the south, eh?  Motorhead really attract the widest range of fans I’ve seen really, although they’re nearly all black wearing misfits, there’s the young and old, rockers, punks, death metallers, stoners, emo-kids, Goths, just about every genre pays its respect to the legends.  Given the almost universal application in the rest of the media of “that” song of theirs who isn’t aware of them?  I read with interest this week that Lemmy had stopped off to speak at the Welsh Assembly, at some C*ntservatives invitation to speak on the topic of drugs, though they weren’t entirely agreeing with the legalise heroin stance he came out with.  Still, another sign perhaps of how much the former Conwy farm dweller has moved into an ever-higher national consciousness and (surely not!) attained a degree of respect.

The delayed entry was a bit annoying when as soon as we got in it was apparent that Girlschool were playing already.  Moved close to the stage with not much problems for a good view.  My only knowledge of the band came from their classic “St Valentines day massacre” EP collaboration with Motorhead from about 1979.  Presumably with at least 3 of the four girls in the band being original members they’re all somewhat mature themselves, and while they might not have hammered themselves as hard and as unrelentingly as their cohorts, they do still look quite good.  Yeah, well, so I’ve been in MILF territory before, so what! (Although maybe not tempted by the drummer).  Their honest heavy metal is ballsy, straightforward but delivered with gusto, inevitably kind of like a female Motorhead, and they do seem to be enjoying themselves.  The set picks up power and intensity with the last three numbers, finishing with the track I and most there would have known,  “Emergency”.  They are apparently releasing a new single as well so obviously have caught the bug again, fair play.

Laying out lots of towels on the amps put me in mind of “ der Jirmans” but In Flames are actually Swedish.   Sporting a nice line in co-ordinated backdrop, drum-skins and football/work-shirts (with names on just in case) there’s a buzz in those gathered in front for them. Suppose there’s some mutual benefit here for them tapping new markets in the headliners wide fanbase and also in return Motorhead getting fresh blood in.  I’d probably only heard a song on a compilation that I couldn’t remember but knew generally of their melodic death/thrash metal-ness.  The punch and pounding you’d expect came across very quickly, and did indeed have those elements reminiscent of the more currently accessible post-death acts like The Haunted, but the singer’s mix of gruffness with clearer or more melodic style also hinted at System of a Down.  The yelp in his vocal style put me (less positively) in mind of nu-metal though, like Quorn.  Largely though it was good stuff, some killer riffs that couldn’t help moving you, occasional sampled effects adding good textures and breaks, and with songs like Episode 666, Trigger and My Sweet Shadow rounding things off well.  Especially when he persuaded the crowd to get a genuinely massive mosh going on, ahhh, just like the old days.  As an aside, I learnt this week that the Swedish for carrot is morot, which I found interesting given the welsh is moron, wonder which came first and who introduced the carrot to who…

Now, having previously had crush injuries, flash pan blindness and singeing, and proper deafness courtesy of Motorhead and their gathered fans I was braced but found myself largely untroubled up near the front, pahhh, not like the old days.  No contrived intros, just up to the mikes and saying hello, all in black as you’d expect, hyping up the crowd as if it needed it, looking completely at ease.

“We are Motorhead and we play rock and fucking roll”

Doctor Rock, Stay Clean, Love me like a reptile, {A break to ask us if it’s loud enough, of course everyone’s going to shout “turn it up”}, Killers, Over the Top, No Class, Metropolis, Fast and Loose, Ramones (“This used to be a happy song, now it’s sad.  Cos they’re all f*cking dead”), I got mine (“From the Another Perfect Day album” CHEER ”You didn’t say that then, you f*ckin hated it”), Dancing on your grave, Sacrifice, (“For all the cheating b*stard businessmen and politicians everywhere”) Just cause you’ve got the power (that don’t mean you’ve got the right), Going to Brazil, In the name of tragedy (“See, you like the new ones as well”), Killed by Death, Iron fist, Whorehouse Blues, (“Well, it’s that time of the evening”) Ace of Spades, Overkill.

So effortlessly good that at times I thought they were just in third gear, but really at his venerable age I suppose you have to pace yourself.  Or maybe it’s just that they have been doing for so long (21 years even for the Welsh third of the band, guitarist Phil Campbell, p*ssing all over Fast Eddies 7 years or so with the “Classic” line-up) that all they can do is deliver the goods with such confidence as seem a second nature.  And all looking remarkable well and, for god’s sake, more fresh faced than me, there must be some substance to this devil-pact thing.  Phil’s guitaring is really impressive, for me who’s not impressed with guitar histrionics, he does enough with subtlety and skill to colour the songs in the short breaks between verses and choruses without going technique mad.  He also comes across exceedingly friendly, acknowledging people in the crowd, all smiles.  Lemmy drives things ever on, personally I’m glad to see them operate as a 3 piece again as it emphasises the incredible power he creates playing the bass rhythm guitar style, the massive distorted sound is ecstasy for me, all ways has been, always will be. He seems to have a permanently contemptuous snarl going on when he’s not head cocked back growling up into his mike.  Mikkey Dee’s drums as heavy as they come, never more so than in his solo spot halfway through Sacrifice, when the other 2 go off for a fag break, and he creates such an intense thunder that you actually get concerned it’s going to start interfering with your heart rhythms.  Don’t let anyone tell you a drum solo is a cliché without having heard one of his.  He breaks up the set more than once by climbing up onto his drums and exhorting the crowd into fresh bursts of life.  They play only a couple off their new “inferno” album release but the quality is right up there, they still are creating great songs.  I am one of those people that believe AOS is one of the finest songs in the world, it changed my life, but there is so very much more to the band, strength in depth that they keep adding to.  Just to add to the mix there’s an odd encore of “whorehouse blues” with Lemmy just singing and playing the harmonica, with the other 2 playing acoustic guitars.  But they end as usual with the endless ending of Overkill dissolving into wincing looped feedback, magnificent, unashamed noise, and Lemmy machine-gunning us all with his bass.  A sure-fire hit.

Shouldn’t, but feel I have to.  He’s about 60, wonder if he’ll go from us like Peel, suddenly, leaving the massive hole but filled with all the classic memories, and what obituaries would be fitting?  You’ve still got the chance, get some live Motorhead down your ears, it’s not like you need your high frequency hearing much.  Then again you may have another 10 years or more to see them yet, maybe I better make some quantitative (immortality)/qualitative (soul) exchange deal going with me old mucker Beelzebub before it’s too late for ME to see them again. I should be in his good books having once had a congregation of evangelists pray against me…