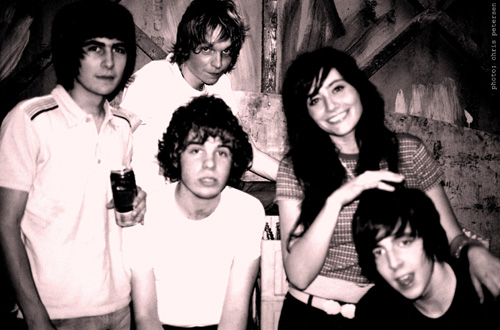 It seems to be the norm, at least when I go there, for the Cardiff Barfly to open their doors half an hour or so after the advertised time, which in this case was 7.30. Not really a problem, just means you get to sink a couple of Stella’s in the “Rummer” pub over the road before you go in, can’t claim this is a disagreeable situation for me particularly but, what it does mean is that in most instances as the punters are starting to make their way into the venue, the first support band are on stage & playing to a half empty club, with people drifting in to the bar etc.
Tonight this honour was bestowed on “Moscow” who in fairness to them made a good shot at warming things up. Their modern Tele / strat guitar based sound is not the most original sound you will ever hear, although it is played to a good standard. Song wise it all went over my head a bit until the last 2 numbers, of which the first was “a new one” although I don’t think many of us there had heard the older one’s anyway! But this & the last track showed that when they look to use subtler guitar & more constructed vocals they can pull of a decent tune. I am assuming they are local as I notice they are billed as support at some other venue’s in Cardiff over the coming month’s, of which, if I attend, will make sure I leave the bar to have another look.

The second band on tonight were “Alterkicks” from Liverpool, who if I’m honest, were the band I had come to see. Caught them at Bristol University a couple of month’s ago supporting “The Departure” who are themselves, a good band but, I thought Alterkicks had been the better that night & was really looking forward to seeing them again. They didn’t disappoint either, starting the set with their single “Do everything I taught you” which is out as a limited edition vinyl & CD release on “Fierce Panda” records, renowned for launching “Coldplay” amongst many other successes. You just know that this single will sell out & end up being re-released in the coming months as the popularity of the band picks up as they hopefully get to play more gigs. The band has a great mix of acoustic & electric guitar with a tight rhythm section to back them up. There are tastes of “Sonic Youth” & possibly the “Pixies” in there somewhere. Their singer Martin Stilwell has a great voice & plays electro acoustic in some of the songs, notably as a base for the spaghetti style guitar in the single. There are no flat spots in the set with the very scary “Cannibal hiking disaster” a highlight. This song is about making a decision whether to eat your friend when stuck out on a mountain with no food, a la the film “Alive”. You could feel the tension in the room as we were taken through the journey of how he got to that predicament, & then the relief, even after cutting off a slice of him, that the his mate is still alive anyway! They write the type of songs that even after one listen, you know the hooks the next time around. I recommend if you get the opportunity, to catch this band early as they, I consider, are going places & its always nice to sit back & say to your mates you saw them at your local toilet venue along with another 50 people!

The Headline band tonight was “Little Flames“. Jangly, disjointed, post punk sort of thing. Liked the way the lady singer raised one of her eyebrows at the audience during the songs & her hooped top, but not much else really to be honest! They seemed to be quite popular with their own little audience bouncing around down the front, & there’s nothing wrong with that! Would probably always be filed in the “also ran” category as far as I am concerned.