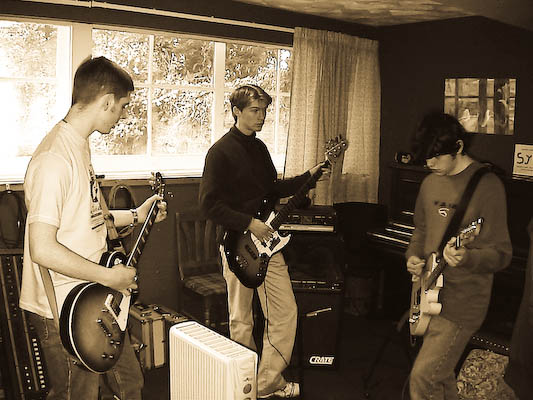 Carl Gintis says, ‘I think it came about because of Neil Crud showing Adam Walton an early demo of ours. The band at the time consisted of myself (Carl), Dave Gintis, Joe Gintis, Dan (Prescott) Gintis and Stephen (Kitching) Gintis. We recorded three songs (Harmonica Song / Anatical Kind, Oliver and Philosophical Transactions of A Disappointed Physicist (I think). Can’t remember an awful lot about the session, but Crud were there and we renamed “Harmonica Song” (which incidentally, did not have a harmonica on it) “Anatical Kind” by picking random words out of a notebook he had. The song also included a psychedelic reversed loop of the outro groove.’

Neil Crud adds, ‘I never recalled that last track being called Anatical Kind, I always thought it was Power Of Imagination. Anyway, still a great track, a bit ropey as they were so goddam young and pretty nervous (despite being cocky). The music was very early Half Man Half Biscuit, and I chucked the reverse loop in at the end to give the session a bit more of an edge, rather than bands just recording three tracks in a studio and mixing them quickly in a day. Getting them to play and record as ‘live’ as possible was always foremost in my mind, as it bought us more time to twiddle about with sounds and do reverse loops!’

He continues, ‘I loved the Philosophical Transactions recording more than the single version they did a couple of months later for Slacyr Records. It has a cool vibe about it… Real atmosphere, despite being in a key too low for Carl to sing… Love the slight delay on the snare as the song moves on. I also tried to get a Radiohead Creep style bleeding feedback guitar in there, but decided to keep it down in the mix, which does work.

‘The middle track Oliver is not really a Gintis song (it was at the time), it was Steve Kitching’s tune (and his vocals), but the style did have that HMHB musical manner about it, with fantastic lyrics. I’ll microwave my CDs and pull apart my tapes, burn all my vinyl, I’ll do whatever it takes… A true love song; because if a man is prepared to do that to keep a woman then it’s true love… Or he’s completely insane…’