As a seventeen year old I used to trundle along from my small flat in Bath Street to The Bistro in Rhyl every night of the week (bar Tuesday when it was closed). It was a punk/alternative scene with no bands; we’d buy a pint that would last all night and listen & dance as Pete Bethel played alternative / indie music. The Bistro accountants eventually realised that employing staff to cater for 40 mid-week punks who shared their drinks wasn’t good for business, & shut their doors until the weekend.
Many many years later during which the dance E culture killed off any sort of guitar driven scene in the town, the bands started crawling back. Yes we had the Sons of Selina, Psychosexual Sex Terrestrials & Flourescent Daydream, but their successes didn’t carry any movement and any solidarity was quickly rubbed out by a lack of money. The Breeding Ground brought together an already promising batch of young people, these bands had been playing in the backrooms of pubs & they suddenly had a real stage, real PA, real lights & real people to play to. The real people they played to also formed bands, and the scene grew, fed also by MASE in Llandudno & publicised by this website. To use a pun, it has linked North Wales.
Gigs started being well attended, sell outs in many cases; bands from out of the area came to play and returned again and again. The Breeding Ground was too good to last, underage drinking in the street where the kids go unchecked, cause violence and vandalism is fine, but to have it at a place where they’re safe, won’t cause trouble & stay off the streets is a no go & the council soon put a stop to it. The building has since been torn down, but, like The Bistro, will & has gone down in folklore. The void of no venue didn’t last long, Steve Rastin, long time champion of the scene took it upon himself to promote gigs in Bar Blu in the town and by March 2003 a regular Wednesday night was established. Many eyebrows were raised as to the choice of day, after all this is Rhyl and also the venue; a trendy nightspot. Against the bookmakers odds Blu established itself as the place to play and the place to go; Wednesday became the new Friday & most nights were packed out, week after week. Rastin kept talking of the Metro, on the Prom and with Blu taking a blow when the management pulled the plug on Jives Room during their set in September where the punters firmly voted with their feet and stayed away, Rastin saw the opportunity to launch The Metro.
The eyebrows once again went up, a Monday night in Rhyl, particularly a damp cold October Monday night in Rhyl, it’ll be a step too far this time… 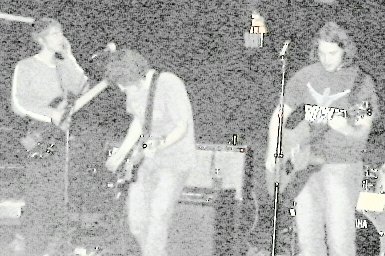 As far as venues go, the Metro is excellent; a good rig, good sound, great size with plenty of pillars and areas to break up a big room. A lap dancing bar upstairs to add a seedy touch. So it just needs to draw the punters in, but I’m back to my point at the beginning about the Bistro accountants; it doesn’t take a genius to work out that they can’t afford to go out 3 maybe 4 nights a week, so one night has got to go. (Anyone for line dancing?). Saturation level in this small town has been reached and once a week is just about the stretched point of the limit.
The line up of Junebug, Jives Room & Gintis is very mouth-watering, but even they are going to be pushed to pull in the punters on a Monday night considering the number of local gigs they’ve done in the last month. Nevertheless a handful of the faithful came to witness the launch of a new venue. The bands tossed a coin for the running order and they are 3 very closely associated groups, which is a great achievement for a town, brought up on backstabbing.
Gintis and Jives Room need now to move on, they need direction. Gintis are very much an embryonic entity, still finding themselves & yet have so much under their belts already. Their achievements are down to excellent songwriting and self belief & they now need to step up to reach a wider audience, they need representation, management, someone to believe in what they’re doing & the nous to take them to the fore. And they can do it. In the meantime they need to promote their name & their superb debut EP (on Slacyr) to all and sundry to build up that name. They have the songs, the charisma, the calamity & the youth to carry this through. 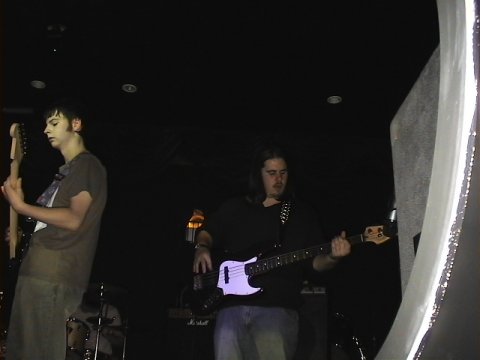 On a local band league table Jives Room are way ahead of Gintis, they are, like I’ve said & I still stand by, probably the best live band in North Wales at present. Three guitarists & a bassist all playing different melodies, never competing, always harmonious and to a level of musicianship far above their contemporaries. This could lead to a blasé attitude and shite songs, but that’s not the case with Jives Room, the songs are stonking and the band very humble. And exactly like Gintis, they need to set their sights now on furthering their territory; the internet is a powerful tool, use it! This website is tantamount to that; in the next 5 days nearly 2,000 people will have visited link2wales, 100 will read the gig guide and 100 will read this review, the following 5 days about 75 will read it and so on.
Junebug are like the godfathers of Gintis and Jives Room; the shout of ‘Joooonbug!’ is often heard at any gig in the area & the Latham brothers have put egos aside to help other bands, recording demos, sharing gigs & experience & I think bands owe a lot to Junebug for this. Their metronome drummer is incredible & the brothers (who have swapped haircuts) play note perfect power pop that’s nicer than a packet of Nice biscuits dunked in French tea in Nice. They are very nice, but very professional & I’ll be playing tracks on their new LP ‘First’ on forthcoming link2wales radio shows. It’d be great to see a Gintis, Jives Room, Junebug package tour organised, where the 3 bands go out for a week or 10 days and mix it in the real world. (Cue Martin Green Dragon) 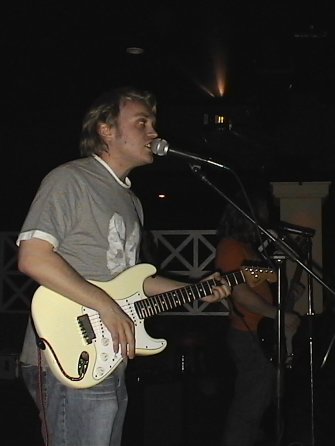