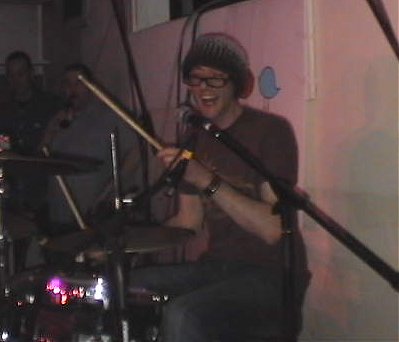 Alcohol is ace innit? You wake up all fuzzed out with a banging head the next morning & I love it. I love having a hangover, as it means I must’ve had a good night. I can only assume at that point that I had a good night as there are huge chunks of memory missing. I’m like a dodgy computer hard drive after a night out, with corrupt & irretrievable data hampering normal operations, but slowly and surely the memory starts to recover. Yes, some bits will be lost forever but I start gasping with the realisation that I did dance the spastic dance with my sister at Bar Blu last night, I did pick her up & flip her upside down, I did try & encourage Dave Cox to attempt a threesome with her & boyfriend Steve F, & I did do tongues with Adam Walton.
Like I said, alcohol is ace, just ask Andy Fatman who walked home diagonally, stopped to lean against a wall not realising it was a small wall & subsequently fell over it, somersaulting & doing his back in the process!

The organisation that went behind tonight’s event stemmed all the way back to October 2003 when the Walton suggested Rhyl would be an ace place to do an outdoor broadcast. He promised me lots of BBC money (as he always does & never pays me) to do a recky on possible venues in the town. Bar Blu was the first choice but the politically correct ones at the Beeb stipulate disabled access is a must & Blu does not reach their criteria. 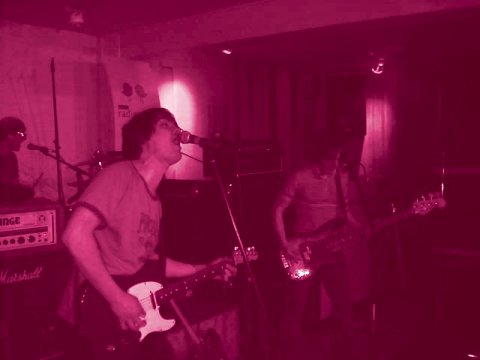 So you could’ve been watching The Caves play their slick, dead tight half hour set from the Rugby Social Club just over the bridge, it had a stage, lights, but not enough power points, which could’ve led to a failure during recording, & that would’ve meant you’d’ve not got to hear their splendid song Wow! Machine that’s being bled all over the airwaves at present & finished their opening appearance. They looked pretty tense, perhaps not helped by being hammed up as Wales’ finest unsigned act of the moment & having to go on first. Or perhaps more so by probably losing the recording of their opening song to technical faults with the vocals. Lets face facts, Bar Blu has never heard such a sound cos at a cost of nearly 3 grand. All this gear was brought in to ensure your ears were thoroughly cleaned sonically by the time you hit the kebab shop. The Caves have got the right backing & with the nod from Fairziff they’re destined for bigger ‘n’ better things. 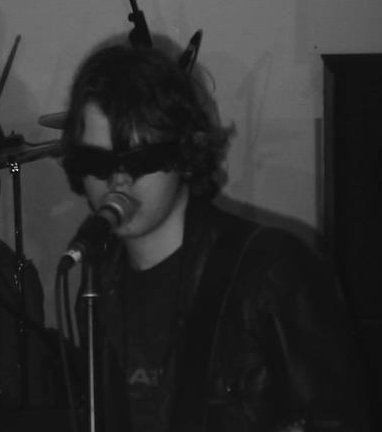 The research for a suitable venue in late 2003 also tossed up the town hall. The council were approached & they turned us down on the fact that some kids once daubed graffiti in the building during a gig there. The vandalism probably said; ‘Every Rhyl councillor is a corrupt money grubbing waste of time and should be shot.’ The truth always hurts. So you could’ve seen Gintis away from their natural habitat & at the town hall, but thankfully Blu was given the nod after the Beeb did a U-turn on the disabled policy & the local heroes of the day turned out a set to warm the cockles of your heart. 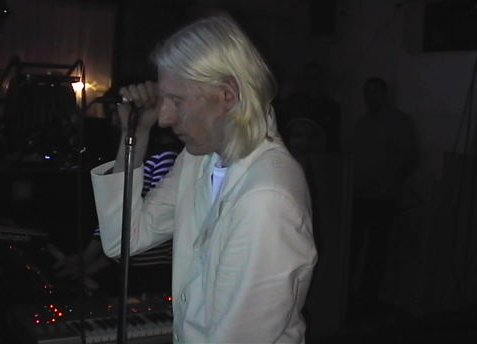 ‘I’m superhorny like a takeaway curry, like the shipping forecast you got me in a flurry.’
Anyone who comes up with a lyric like that should be honoured at one of those Welsh music award things that I never get nominated for (yes I’m bitter!). David Wrench, for he is the man behind the Superhorny song has spluttered onto the scene in the style of test match cricket & is about to bring us an album of stunning quality. He’ll certainly put his leg before your wicket in an 80s pop fashion, yet sounding so bang up to date. The forthcoming single Superhorny will undoubtedly be ignored by the people who matter, the people who determine that the kids will only get to listen to sugar coated mindless garbage; which is a crying shame for this track has ‘massive hit’ stamped all over it.
David played this as his closing number, ending an evening of entertainment arranged by the BBC to celebrate Blood & Lipstick’s 1st full year of hosting Wednesday night gigs here at Bar Blu in Rhyl (most of which you can read reviews of on this site). I felt almost a sense of pride that Adam Walton & the BBC actually went to the trouble to ensure that this evening went ahead, especially when the groundwork initially began in October. The pride of something happening in Rhyl, my adopted hometown since the age of 17; not that I have an affinity to the actual town, but more of a passion for the scene that we are a part of, a scene we helped create with this website seemingly the hub for information, reaction & proaction..
Mr Wrench, with his striking looks not too disimilar to Rick Wakeman took to the minimal stage that was adorned with Radio Wales bunting & pulsed the opening synth sounds from his keyboards. It was a sound that was surprisingly full when you consider he was only flanked by another keyboardist and a guitarist. Two songs he didn’t play were Fuck You And Your War On Terror for obvious broadcastable reasons & also his version of Radiohead’s Creep after the personal spat he had with Thom Yorke who refused to let David use it on his Anti-War EP. What he did give us was a live insight into what to expect off his forthcoming LP ‘The Atomic World of Tomorrow’ on Storm Recs; the David Wrench world of tomorrow looks very bright

The night drew to a close, the BBC shitworkers started to scurry round and pack their equipment away, Adam got emotional, the shutters on the bar came down, the Gintis & Jives Room posse headed for Caskeys, Dean Obscene snook back to his private domestic ironing bliss, David Wrench clicked his fingers & disappeared in a puff of peroxide smoke, Fairziff headed for the Star Wars bar at Ellis’, soon to be joined by Jane Crud, Steve F & Dave Cox, Fatman had a date with that wall, Steve Sync sloped off early to steam some vegetables, & Paul Scouse got back to nicking hubcaps off cars..
I’ll iterate my point again; alcohol is ace innit.