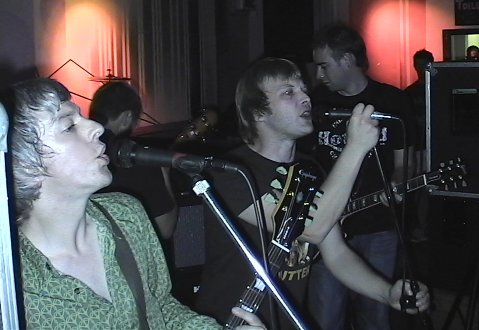 I got stung by a bee this afternoon; it charged me £5 for a jar of honey! – But seriously, these jaunts into civilisation are a far cry from the hum of nature. By hum of nature I mean a million nasty flies, midges, mosquitoes & wasps swarming around my head insessantly. I’m told I have a Very Obsessive Insect Disorder (or VOID for short) as I spend my time in a one man war against the creatures, hoovering flies in mid-flight, shooting woodlice, chainsawing gnats; that sort of thing.
So Jamie Cardno is a break from the countryside & therapy for my VOID condition. He first arrived on the scene 4 years ago as a very young drummer with Floater’s Revenge (same band as Dave Cox), then went to college & now turns up in the holidays to strum us a few numbers & roll us a coupla fat ones, which is what he did tonight. I’m not sure if it’s his own stuff or not; there was a nice pisstake of Coldplay in there. Then 10 mins into this very short set Jamie went all druggy on us & started making incidental noises on a synth while a mate played guitar (how bizarre) – but they soon swapped instruments to play out with an excellent Johnny Cash meets the Gun Club tune to the heaving crowd. 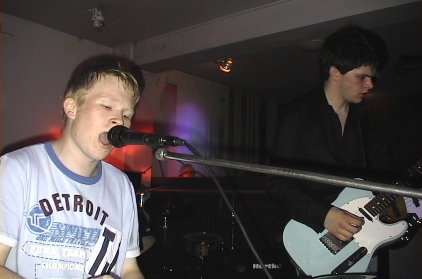 These days its easy; you get an idea to form a band, practice for 2 weeks & you’ll get a gig at Blu. Well not exactly, you could get on S4C TV with that kind of CV providing you sang in Welsh (no matter how badly), but the reasoning behind letting a new band play is because it’s Ste Gintis behind the guitar with his new outfit Legends For Day.
The differing stories as to why he quit Gintis will probably bounce around for a while longer but the animosity can’t be that bad when you have the ubiquitous Joe Gintis as your drummer/keyboardist.
This is how Steve wanted Gintis to sound, what he & his former colleagues should realise is the blend is/was what made Gintis so interesting, but you need a big ego to be in a band & sometimes there’s one ego too many to cope with. It was disappointing not hear Oliver, a Ste Gintis song dropped by both parties & a modern day classic. And 3 out of the 4 or 5 songs have the true potential to make a 2 week old band a reckoning force if they have the nous to do it. By not being afraid to go off the wall on occasion you know they’re not trying too hard to please the mums ‘n’ dads. Please do something with the Streets-u-like last song, like not play it again! But Carl Gintis was of a different opinion & was really buzzing over this last one & I s’pose it turned out ok in the end.

The Real Crazy Apartment started off with what sounded like a send up of GnR’s Welcome To the Jungle, only looking at ’em it should’ve been welcome to the hairdressers! They sport that North East Wales / Chester look with that North East Wales / Chester sound to boot & they got so excited that they broke a bass string & had to postpone the next song. Someone did shout, ‘I’ve had my leg blown off – stop the war!’ & we proceeded to count the times I used to break bass strings but still carry on playing (only cos I never carried spares & no one was stupid enough to let me loose on their own
guitar!). Then the mic started breaking in a Norman Collier style – this was going to be one of those nights; you come to a new town, place is packed out, you’re keen to impress, & the bloody equipment is failing around you! For their worth RCA owe a lot to the current indie sound & draw from all the best bits to give an energetic & flawless performance which thankfully had no more hitches.
Steve Sync phoned me next day to insist that we’d had our drinks spiked – yeah right, with alcohol! We were just pissed; ok, very pissed, too pissed to actually stay & watch Ethergy as it was way past midnight by the time they came on & the place was still bouncing; as was Steve, against the walls on the way home. We got in & celebrated the execution of 3 moths, 2 mozzies & 9 houseflies with a slap up cumberland sausage & curried beans. 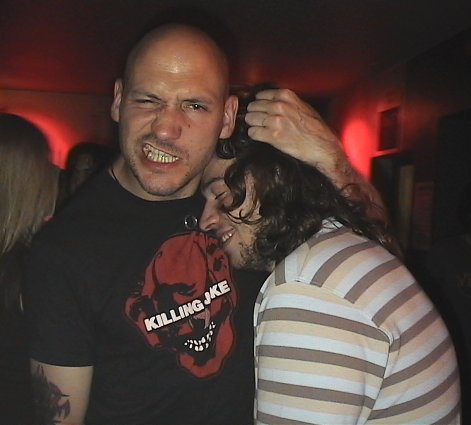 My son, Carl Gintis getting a fatherly hug & we got a pic of Steve Rastin’s latest oral loss, this time prizing his teeth out with a chunky kit-kat was not to blame. How did he do it? Answers on a postcard… 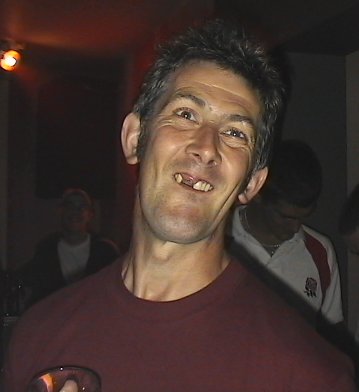